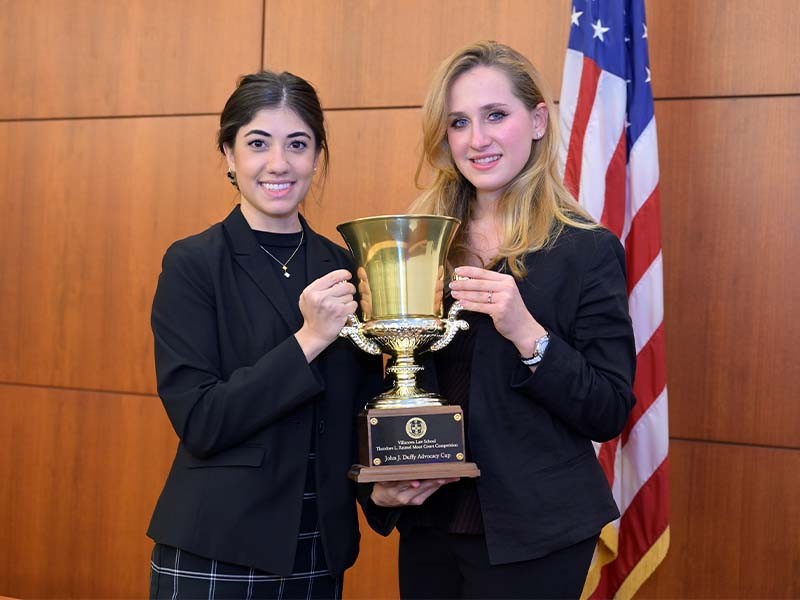 After weeks of preparation and preliminary trials, the final round of the 62nd Annual Theodore L. Reimel ’24 CLAS Moot Court Competition concluded on Thursday, November 18, 2021. The competition is an annual intra-school tournament and a hallowed tradition at Villanova Law. Named in honor of the late Theodore L. Reimel, Judge for the Pennsylvania Court of Common Pleas from 1953 to 1973, the competition is designed to foster student development in written and oral advocacy through simulated appellate argument. After being held virtually last year, this year’s competition was back in-person at John F. Scarpa Hall.

The case argued in this year’s competition focused an adolescent fighting a deadly, aggressive cancer who refused to undergo advanced treatment despite the expressed desires of her mother and her medical team. This case presented the issue of whether the Commonwealth of Pennsylvania should adopt the “Mature Minor Doctrine” as a matter of common law and permit minors to refuse life-saving medical treatment if they are sufficiently mature and competent to make that decision. It also addressed whether an adolescent has a right to refuse unwanted medical treatment under the substantive due process protections required by the Fourteenth Amendment to the United States Constitution and Article I, Section 1 of the Pennsylvania Constitution.

For the third year in a row, the final round consisted of all-female competitors: Sophie Davish ’23 and Elizabeth Kletsel ’23, who argued for the appellant, and Isabelle Roman ’23 and Alexandra Romano ’23, who argued for the appellees. In this year’s competition, Roman and Romano were victorious. Roman was also named Best Oralist in the Final Round.