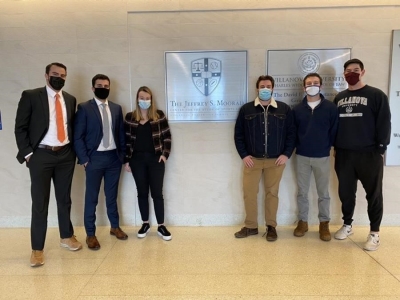 Two teams of Villanova Law students competed virtually in the Seventh Annual Tulane Professional Football Negotiation Competition on January 29-30. The team consisting of defending champions, Austin Meo ’22 and Ryan Murphy ’22, along with new teammate Emily Rollo ’23, finished in third place after competing against 48 other teams from law schools across North America. Additionally, the team of Spencer de Urioste ’23, Joey Frio ’22 and Matt Dacey ’23 participated in this year’s competition. Both teams were coached by previous winners, Arun Thottakara ’21 and Steve Dranoff ’21. In the quarterfinal round, Meo, Murphy and Rollo defeated the team from the University of Houston Law Center, before competing against Brooklyn Law School in the semifinal round of the competition. Villanova Law is the only school to have made it to the playoff rounds in both the 2020 and 2021 competitions.

The competition, sponsored by the Tulane Sports Law Society, is a simulated contract negotiation that uses real-life scenarios, along with actual upcoming NFL free agents. The competition provides participants with the opportunity to sharpen their negotiation skills as well as their knowledge of NFL contracts.

Simulating a real negotiation, competing teams represented either the football team or the free agent and received a set of confidential objectives that served as guidelines for the negotiation. They were also provided with an Excel workbook that allowed them to quickly make calculations and determine whether the contract proposals met their requirements. The judges for each round of negotiations consisted of industry experts, including those from NFL teams such as Minnesota Vikings, New Orleans Saints and the Kansas City Chiefs.

Additionally, Dani Bland ’22, John Reid ’22 and Andrew Delzotto ’23 competed in the 14th Annual Tulane International Baseball Arbitration Competition on January 21-23. This competition is a simulated salary arbitration competition modeled closely after the procedures used in Major League Baseball in a moot court style competition. In this year’s virtual competition, teams represented either a team or a player from Aaron Nola of the Philadelphia Phillies, Alex Bergman of the Houston Astros or Walker Buehler of the Los Angeles Dodgers. Coached by Andy Jessen ’21 and Mike Horvath ’21, Blank, Reid and Delzotto were semifinalists out of the 40 teams competing.