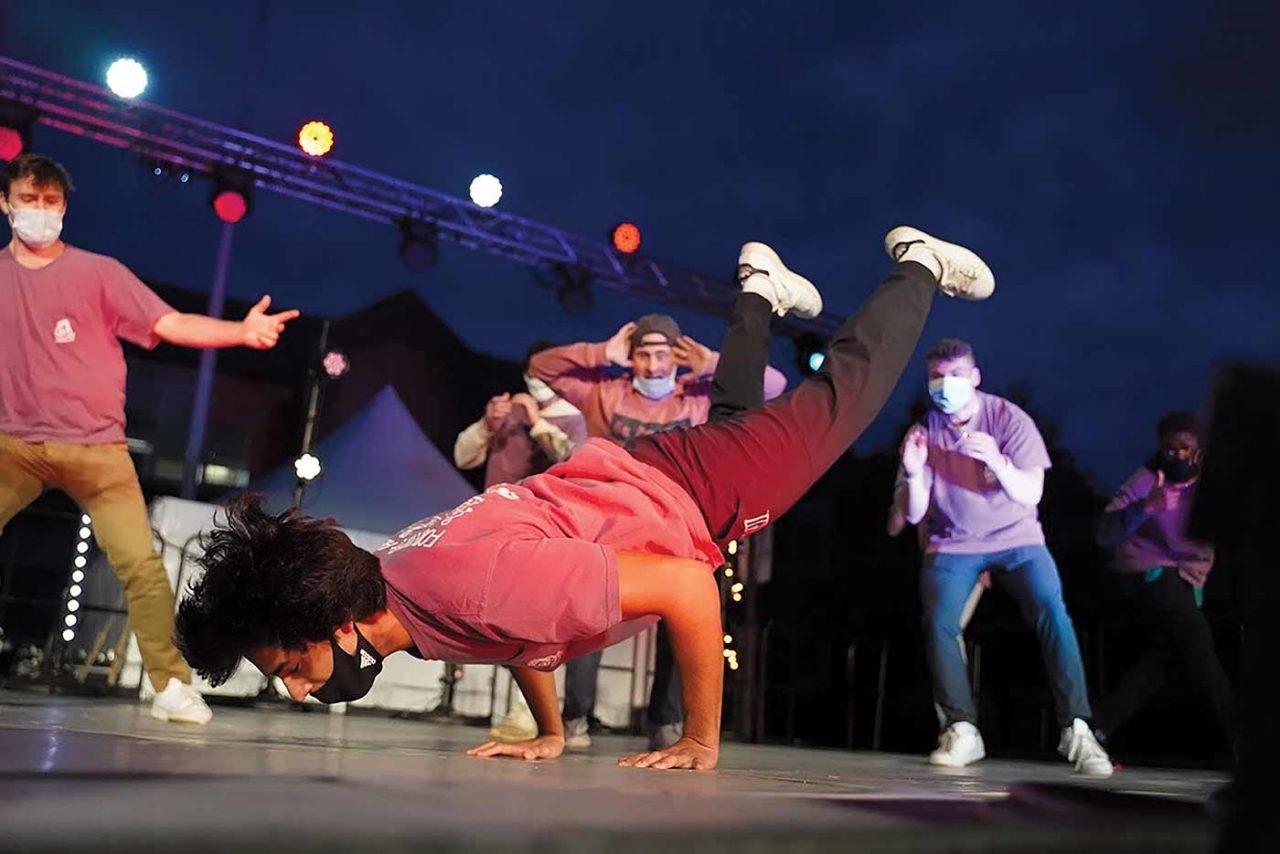 The fun, and the dancing, continued well after the sun went down at this year’s “Embrace Each Adventure” dance marathon, with students break dancing under the moonlight on an outdoor stage at Mendel Field. (Photo: Noah Seng DeLong)

Moving from the confines of the Jake Nevin Field House to three separate outdoor locations, NOVAdance’s 8th annual 12-hour dance marathon looked different this year—but was just as successful as ever.

Complete with games, food trucks and lots of dancing, the year-end fundraiser brought the student group’s 2020-21 fundraising campaign total to nearly half a million dollars: $481,753.64, to be precise.

But it’s the cause, not the dollar amount, that matters most, agree Co-Executive Directors McKenzie Mix CLAS ’21 and Katie Connolly CLAS ’21. All of the proceeds benefit the Andrew McDonough B+ (pronounced “Be Positive”) Foundation, the largest provider of financial assistance to families of kids with cancer nationwide.

“We do set goals each year,” McKenzie explains. “But whether we come close to those goals, hit them or exceed them, all of that money helps families who need it.” With the average B+ Foundation grant totaling $1,000, that means this year’s NOVAdance fundraising has the potential to impact as many as 481 families.

Since 2013, the Villanova student group has raised more than $2.46 million for the B+ Foundation—a remarkable feat that B+ recognized this year by awarding a research grant in NOVAdance’s honor. The two-year, $150,000 grant supports the work of Sofia de Oliveira, PhD, a researcher at Albert Einstein College of Medicine in New York who is studying fibrolamellar carcinoma (liver cancer).

And the work continues. During this unpredictable year, NOVAdance stayed true to the “be positive” mentality and reimagined its most popular events. Silent discos—dance parties where music is piped directly into headsets worn by participants—were moved outside to the plaza around the Oreo. Students went “canning” virtually, sending appeals to friends and family through email and social media. And a full third of the Villanova undergraduate population—2,000 students—signed up to participate in this year’s “Embrace Each Adventure” dance marathon in some capacity.

“Who knows? The NOVAdance of the future might always look more like this one,” Katie says. “Maybe this unusual year was the opportunity for growth that no one saw coming in the first place.”

Inside the Injured Brain