The closest Harry Perretta ’95 MA ever came to leaving the Main Line was in the summer of 2003. The Villanova Women’s Basketball head coach had received an attractive offer from a school in the Atlantic Coast Conference, so he sought out the advice of then Villanova President the Rev. Edmund J. Dobbin, OSA, whom he considered a friend more than a boss. Their conversation did not last long.

“Harry,” Father Dobbin told him, “get up and go back to your office because you’re not going anywhere.”

“That’s all I needed to hear,” Perretta says. “I just wanted somebody to say to me, ‘Hey, you don’t want to do this.’”

Perretta’s office on the first floor of the Davis Center feels more like a living room. On a clear and cold Wednesday morning in January, he sits in a black leather chair and snacks on Tom Sturgis pretzel sticks while he regales a visitor with stories from his 42 years leading the Villanova Women’s Basketball team. Perretta was 22 when he beat out 65 applicants for the job. “I’ll do it for a couple of years and then I’ll try to get a teaching job at a high school,” he recalls thinking.

He never left. He’s in a white long-sleeve Bonner and Prendergast basketball shirt that’s tucked into his lengthy navy blue shorts. He’s surrounded by memories of his teams’ achievements. To his left there’s a picture of the sold-out Pavilion on Feb. 28, 2004, when the Wildcats topped the dynastic University of Connecticut Huskies. To his right there are numerous Big East Coach of the Year awards. Behind him on a windowsill is a blue and white painted basketball, which he received for his 200th win. That was in 1987.

“I guess it went faster than I thought,” Perretta says. “I don’t know how to gauge it.” 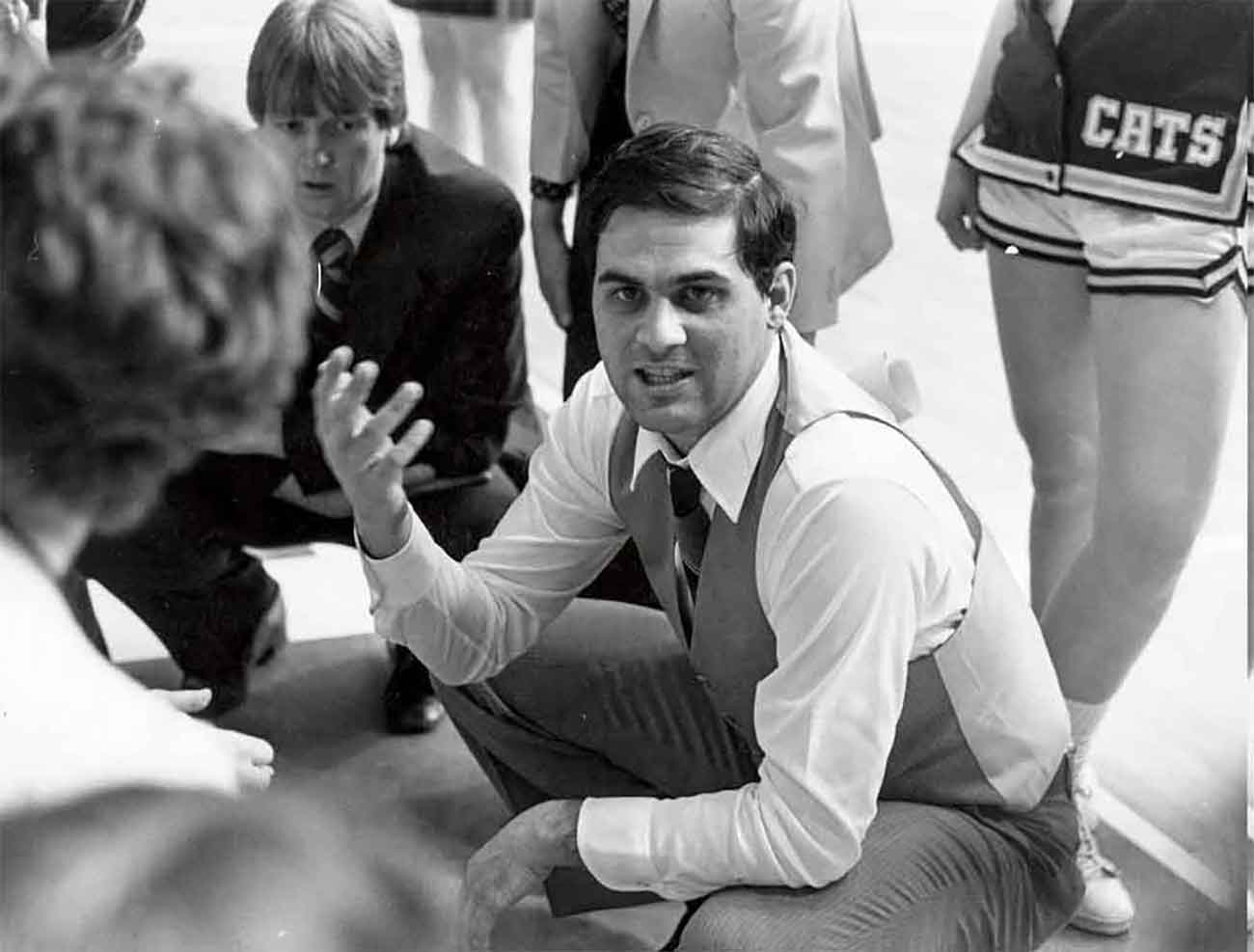 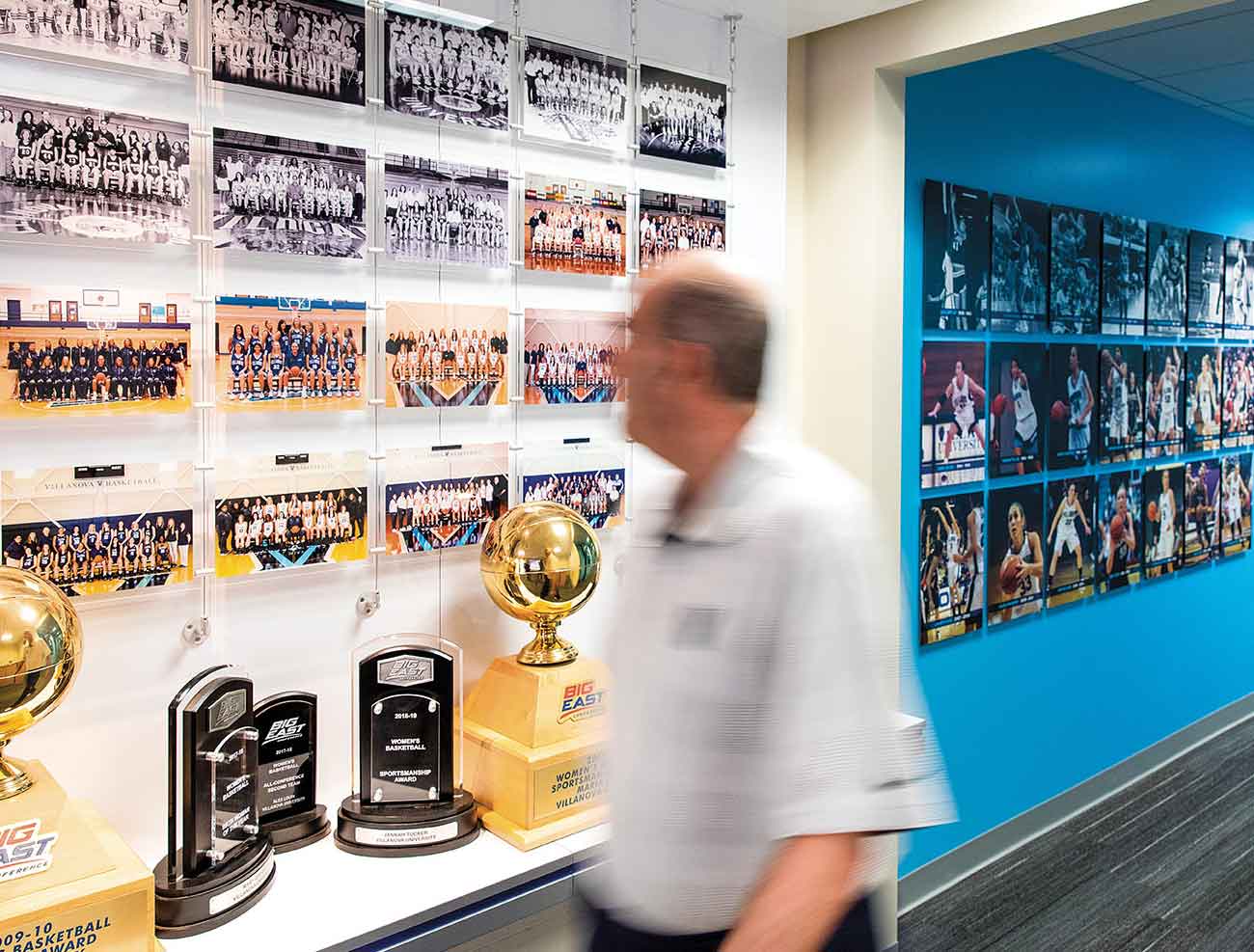 Perretta was 22 when he beat out 65 applicants for the head coaching job at Villanova. During his 42 years leading the Villanova Women’s Basketball team, Perretta has racked up 783 wins and 11 trips to the NCAA tournament.

Perretta’s incredible tenure is tied for the most seasons at one school at all divisions in the history of NCAA women’s college basketball and capped off with the 2020 Carol Eckman Integrity in Coaching Award from the Women’s Basketball Coaches Association. He will be remembered, though, for much more than his 783 wins, 11 trips to the NCAA Tournament or innovative 5-out motion offense.

Besides his quirky demeanor, hatred of flying and habit of nabbing a couple bites off other people’s plates, Perretta’s former players cherish his honesty, his trustworthiness and the countless lessons he’s passed along. While some schools recruit by selling dreams of playing in the WNBA or overseas, Perretta takes pride in the distinguished careers his players have achieved off the court after graduation.

“I think about the lessons I learned when I played for Harry every single day in my personal and professional life,” Trish Juhline Brunner ’03 CLAS, ’08 FCN says in a telephone interview during her commute from Havertown, Pa., to the Hospital of the University of Pennsylvania, where she’s a nurse in the neonatal intensive care unit. “He is a teacher and has lots of wisdom and experience to share.”

Juhline Brunner is not sure she would have pursued her nursing career without the confidence Perretta instilled. He taught her that if she applied herself fully, she could achieve anything. During her shifts in the NICU, where decisions can affect the life of a tiny human being, she’s not afraid to ask for help or admit when she’s in over her head—because Perretta encouraged that.

“Villanova has allowed me to be the person I am for the past 42 years and for that I am forever grateful.”

“Someone told me a really smart person knows what they don’t know,” he says.

He also has encouraged his players to extend their outlook beyond the confines of the basketball court and think about the bigger picture.

“What is really special about Villanova Women’s Basketball is it’s a place where your priorities are in order,” says Betsy McManus ’06 CLAS, who recently started working at Nike with a focus on social and community impact. “It’s a competitive basketball program, but it’s also a place where your education and family come first without question. Harry values your Villanova experience over your Villanova basketball experience.”

Laura Kurz ’09 CLAS experienced those values firsthand during her senior season. She had never watched her older brother, Rob, play at the University of Notre Dame in person before. The Fighting Irish were set to take on the Villanova Men’s Basketball team a day prior to when Kurz and the women’s team planned to arrive in South Bend for their own game. “Go for it,” Perretta told her. She booked the next flight out and was in the stands for her brother’s game.

“How many coaches in the country would do that?” Kurz wonders aloud.

Perretta was the first person to suggest to Kurz that she get into coaching. Now in her fifth season as an assistant coach with the Wildcats, she sat a couple seats down the bench during their game against Georgetown on a frigid evening in January. She described Perretta as a “nervous wreck” on the game day.

On this night, he didn’t stay seated for very long. While the consensus is that he’s mellowed in recent years, that’s hard to imagine. From the opening tip, he shouted directions loud enough to hear 10 rows up behind the bench. He looked more like a wrestling coach, and often placed his right knee on the hardwood, padded by a white Gatorade towel.

During stoppages in play, he didn’t seem to notice the T-shirt toss, the Fortnite Cam or the Villanova Dance Team. He was too busy teaching. When Georgetown made a five-point run to end the first half, he slammed his right hand on the scorer’s table. After the intermission, he got a bandage for his middle right finger.

“The first time I met him I thought he was a crazy man because he was so active,” says Associate Head Coach Joe Mullaney, who’s in his 23rd season.

But the antics and tough love are for more than show. They’re intended to take the pressure off his players and increase their intensity. 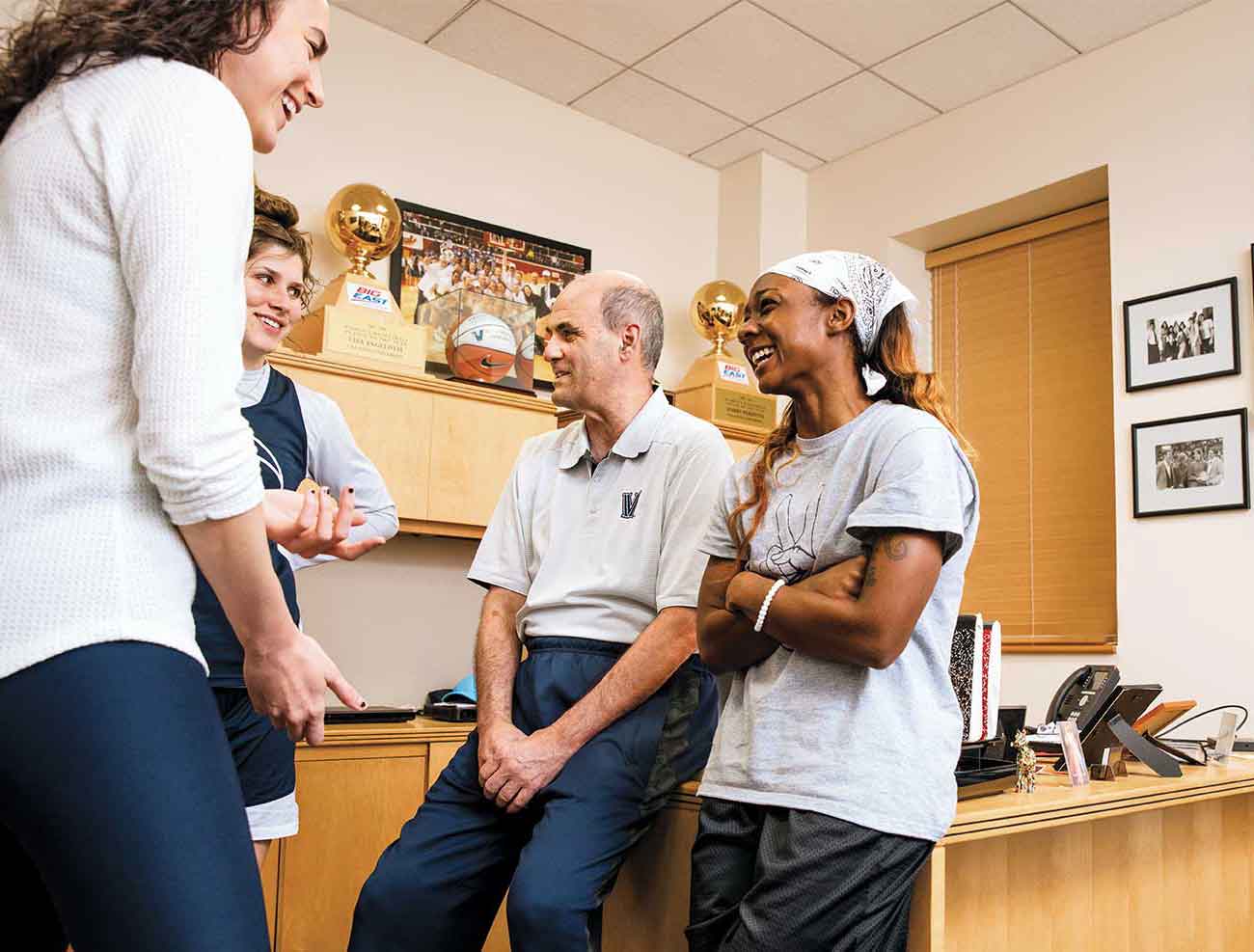 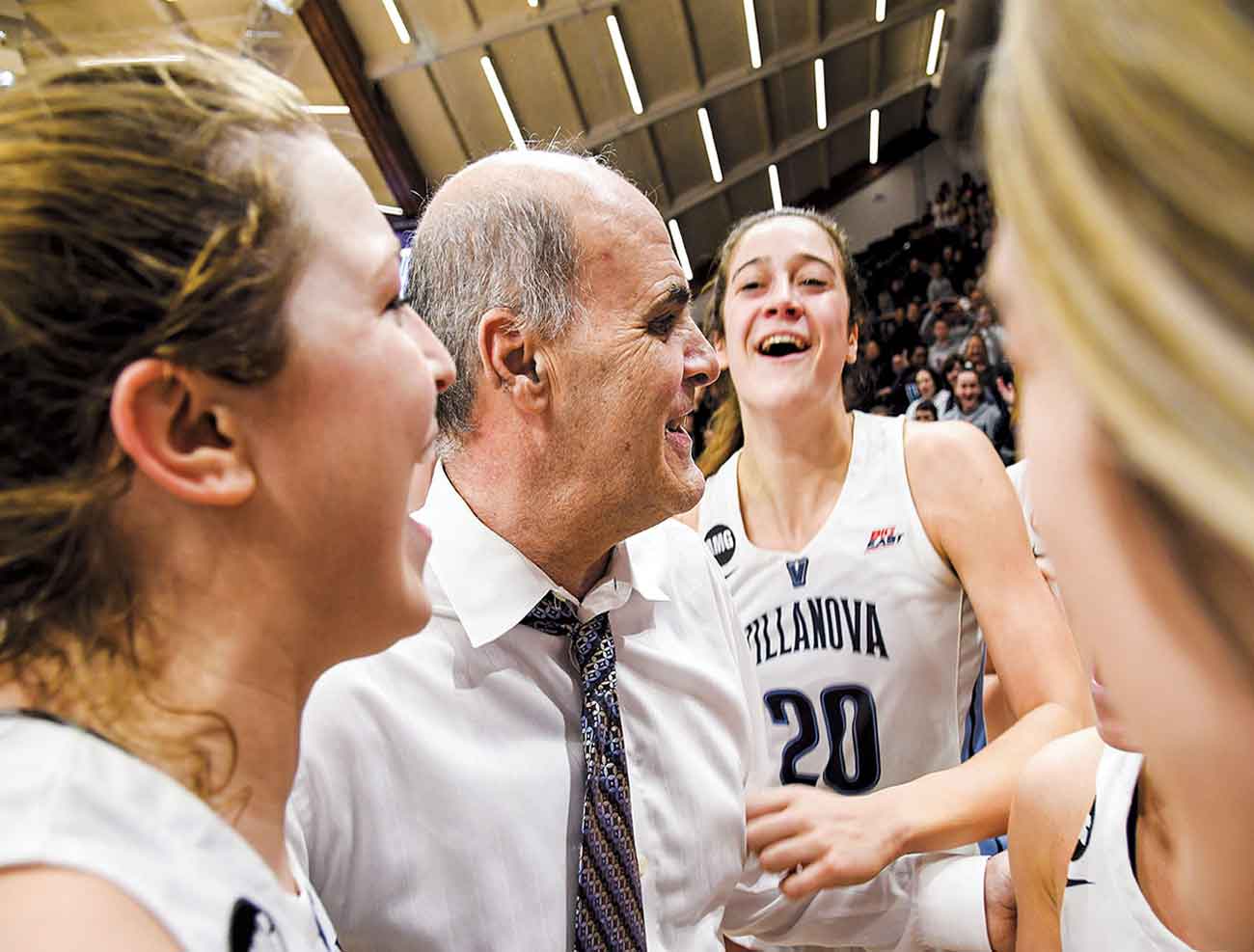 Perretta’s players gathered for the coach’s stories and mentorship on and off the court. His final home game in Finneran Pavilion was one to remember, as Villanova defeated nationally ranked DePaul, 76–58.

“You have to spread out!” he implored during the second half. A few seconds later, as if by command, Mary Gedaka sank an open three-pointer. The Wildcats went on to win 74–53. Gedaka, a senior forward, made the first team All-Big East for the 2019–2020 season while averaging 17.4 points. Her mother, Lisa, who coaches at Gloucester Catholic High School in New Jersey, also played for Perretta.

Lisa (Angelotti) Gedaka ’88 FCN and more than 80 of Perretta’s former players showed up for Alumnae Day and were honored at halftime of the Georgetown game. They took up the length of the court and spanned generations—united by a program and a coach that judged them on their effort level more than their wins and losses.

“He’s created an alumni connectivity in our program that I don’t think you see anywhere else,” Kurz says. “There is a sisterhood among those who have played for him.”

Perretta just wishes he could see them more than once a year.

While Perretta will stay on campus next academic year as a special assistant to Vice President and Director of Athletics Mark Jackson, Mullaney wouldn’t be at all surprised if he took up a side gig. “I could see him coaching a CYO team in a couple years,” Mullaney says. “He has a ton of knowledge about the game and loves being around kids. No matter where he goes, he’ll always be a Villanovan. That’s for sure.” ◼︎

From the bottom of our hearts, thank you for 42 seasons @VUCoachPerretta! pic.twitter.com/sMgEgg0kA7

On Jan. 18, more than 80 of Harry Perretta’s former players took the floor to be honored at halftime of the Wildcats’ contest against Georgetown.

There was one notable absence—the leading point scorer in Villanova Basketball history (2,408 points). Though she wasn’t on the court that night, Shelly Pennefather ’87 CLAS has an undeniable presence in Perretta’s office. Three framed photos of the coach smiling next to his former star player hang on the wall. Two are in black and white. In all three, a screen separates them. 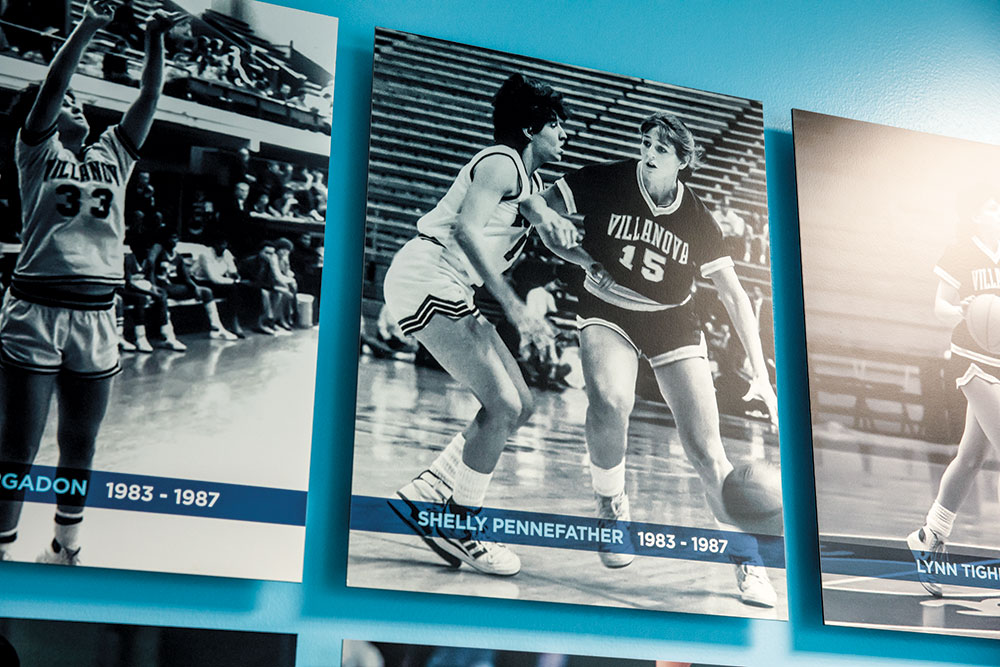 Shelly Pennefather’s picture hangs alongside other notable Villanova athletes in the Women’s Basketball offices in the Davis Center.

On June 8, 1991, four years after she won the Wade Trophy and was named the best women’s college basketball player in the country, Pennefather—now Sister Rose Marie—entered the Monastery of the Poor Clares in Alexandria, Va.

“The Poor Clares are one of the strictest religious orders in the world. They sleep on straw mattresses, in full habit, and wake up every night at 12:30 a.m. to pray, never resting more than four hours at a time,” ESPN writer Elizabeth Merrill observed in a feature story about Pennefather that was published last August. “They are barefoot 23 hours of the day, except for the one hour in which they walk around the courtyard in sandals. They are cut off from society.


She was one of the highest-paid women's basketball players in the world.

Then, Shelly Pennefather gave it all up—and joined one of the strictest religious orders in the world. pic.twitter.com/NVL6UlH8x9


“Sister Rose Marie will never leave the monastery, unless there’s a medical emergency. She’ll never call or email or text anyone, either. … She gets two family visits per year, but converses through a see-through screen. She can write letters to her friends, but only if they write to her first. And once every 25 years, she can hug her family.”

“It’s incredible,” Perretta says. “To think about it is just amazing.”

Through an arrangement he made with the Poor Clares, Perretta travels down to Virginia every June with supplies and an assortment of treats for the nuns that they’re allowed to have on one of their 27 feast days. He also gets to see Sister Rose Marie. At her silver jubilee Mass last year, there was no screen dividing them.

“Perretta got his hug,” Merrill wrote.

While Pennefather initially clashed with Perretta’s coaching style, they now share an unbreakable bond. The Wade Trophy sits behind glass in the lobby of the Davis Center on campus. Pennefather’s Big East Player of the Year Award rests right next to Perretta’s Big East Coach of the Year honors behind his desk. He used to wear the Blessed Mother medal, but now dons the scapular around his neck that Pennefather’s mother, Mary Jane, made him.

While Villanova’s Senior Associate Athletics Director Lynn Tighe ’87 CLAS, Pennefather’s former teammate and roommate, has written to Sister Rose Marie with the news of Perretta’s retirement, he will tell her face to face in June.

“That’s a special connection,” he says, his gaze still focused on the photos. “I think she keeps me alive through her prayers.”

The leading point scorer in Villanova Basketball history, Shelly Pennefather ’87 CLAS — now Sister Rose Marie — forged a strong bond with her former coach that has moved from the court to the monastery where she’s spent the past 25 years.

A tribute to the artistic legacy of Rev. Richard G. Cannuli, OSA, MFA, ’73 CLAS, a friar who made our campus, and our world, a more beautiful place.