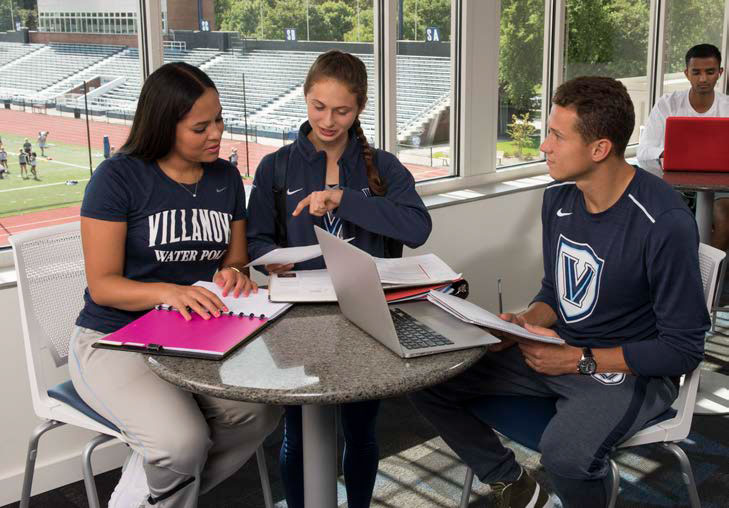 The numbers—and the accolades— tell only part of the story of the Villanova Athletics’ tradition. Twenty NCAA national team championships. More than 100 national titles in individual events.

But those accomplishments merely hint at what defines the University’s studentathletes: They strive and triumph just as much in the classroom as they do in sports competition.

It’s not surprising that in August Forbes named Villanova one of the top 25 colleges that dominate academically and athletically. The designation attests to the prestige of the Athletics Department’s academic accomplishments, now at an all-time high.

The department’s dedication goes much deeper still. The Athletics leadership and staff support student-athletes as whole people, helping them reach their full potential. 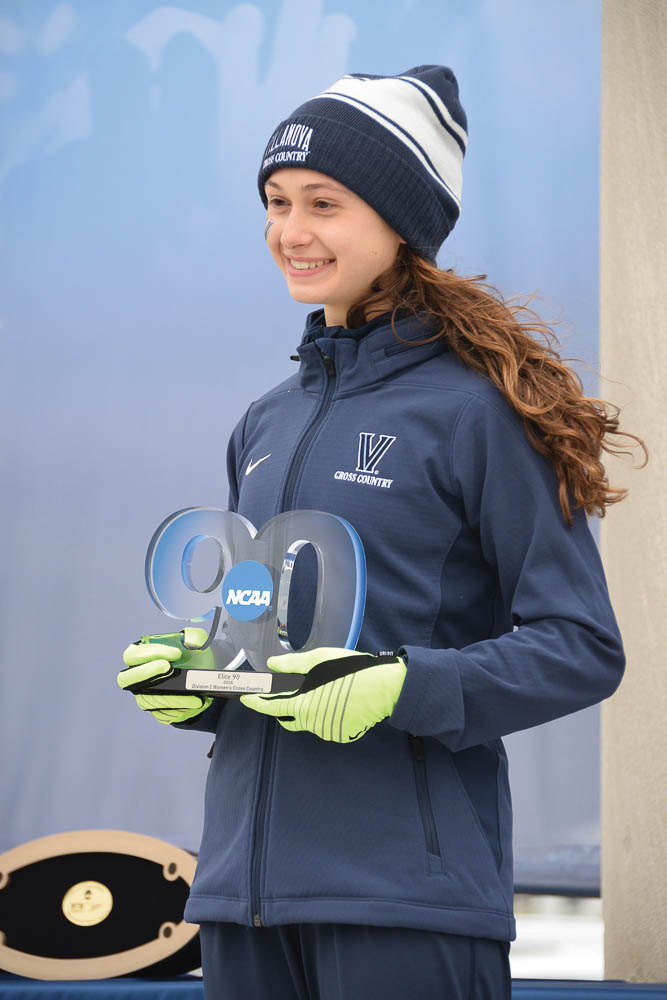 Bella Burda ’19 CLAS, Cross Country and Track and Field, wins the Elite 90 Award, given to the student-athlete with the highest GPA who has made the finals in his or her sport.

“They are committed to helping you figure out who you want to be and helping you find balance between academics and athletics,” says Biology major Bella Burda ’19 CLAS, a member of the Cross Country and Track and Field teams. It’s a unique culture, she adds, which helps her excel in all facets of university life.

Last season, Bella was recognized with one of the premier academic honors in college sports: the Elite 90 Award, given by the NCAA to the student-athlete with the highest GPA who has made the finals in his or her sport.

Bella is the second Villanovan to win the Elite 90 Award, and she’s just one of the University’s many athletes who have turned heads with stellar classwork.

Director of Athletics Mark Jackson expects the tradition of achievement at Villanova to continue—and to elevate to new heights.

Faculty Representative to Athletics Jeremy Kees, PhD, the Richard J. and Barbara Naclerio Endowed Chair in Business, feels this exceptional performance in all areas makes Villanova a distinctive presence in college sports. “As a former student-athlete, I understand the challenge facing our coaches, staff, faculty and student-athletes,” he says. “Villanova has set the bar very high for academics and athletics. But our student-athletes continue to achieve greatness because everyone works together toward one goal.”

“Whatever their goals are, we are going to help our students achieve them.”
--Jennifer Brophy, Director of the Office of Academic Support for Athletics

Bolstering the student-athletes in their endeavors is the Office of Academic Support for Athletics. Jennifer Brophy, the office’s director, leads a staff of advisers who meet with student-athletes to help them define—and ultimately achieve— academic and career goals.

Whether they need guidance navigating a challenging major’s curriculum; finding the right study abroad, research or internship opportunity; or simply scheduling classes, Brophy and her team help student-athletes have a complete college experience at Villanova.

“Whatever their goals are, we are going to help our students achieve them,” she says. 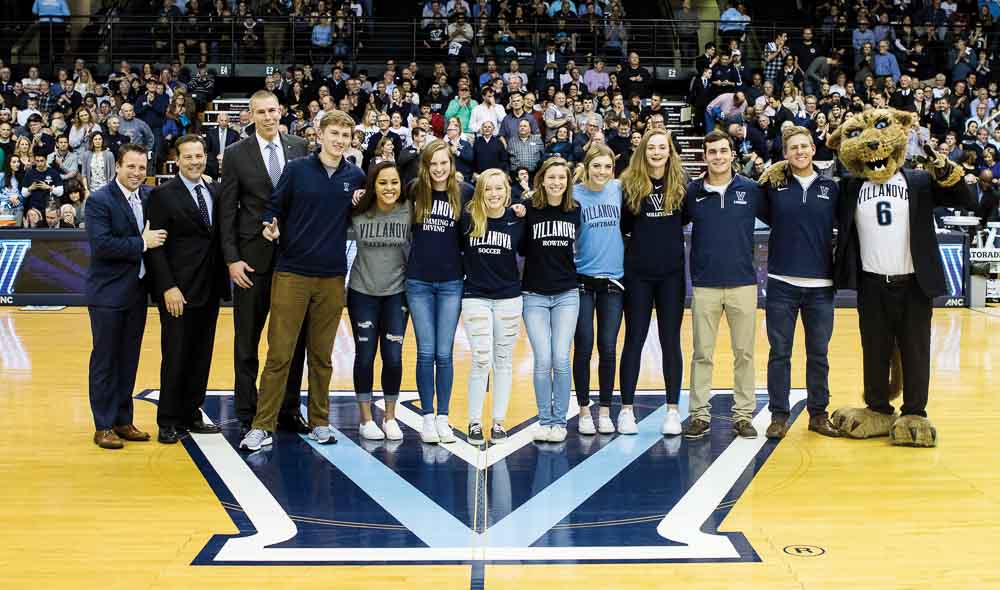 Allison Venella ’08 CLAS, ’13 MA, director of Student-Athlete Development, says that technology has made checking in with student-athletes easier, especially when the team is traveling.

The academic support system has been streamlined and moved online. These changes allow students and staff to communicate from anywhere, access progress reports for classes and schedule tutoring sessions.

Programs like this support the culture of excellence at Villanova, which is distinctive and unchanging. It is also among the reasons Villanova attracts student-athletes from all over the world and from diverse socioeconomic backgrounds.

“The history and tradition of Villanova Athletics couple academics and athletics as dual priorities. The approach evolves over time, absolutely, but those core values have been and will always be there,” Venella says.

Although there were fewer formalized support structures during her time, former player Rosemarie T. Dempsey ’83 VSB says that Harry Perretta ’95 MA, head coach, Women’s Basketball, and the Athletics staff nurtured the studentathletes, from finding a compatible major to connecting with alumni.

“Harry and the coaches were the catalysts in helping the athletes balance sports and academics,” Dempsey says. “They understood each person’s strengths and helped all of us move forward.”

Berkeley, Calif., native Dominique Clark ’18 CLAS had looked at many colleges at which to continue her water polo career after high school, but she wanted a school with a Communication department as strong as its Athletics one.

Villanova and Dominique were a perfect fit. She has been dominant in and out of the pool, turning in multiple semesters with a 4.0 GPA and leading the team in goals with 72 this past spring.

“The staff and tutors gave me the confidence I needed to establish academic success,” says Dominique, who was named to the All-Metro Atlantic Athletic Conference First Team, as well as the MAAC All-Academic Team, last year.

Jalen Brunson ’18 CLAS has worked closely with staff and coaches to succeed in academics and athletics.

Mary Snyder ’17 CON, who won four Big East titles as a member of the Women’s Swimming and Diving team, sees a teamfirst mentality reflected across Athletics, from the director to the coaches to the support staff.

“In nursing, we talk about caring for the patient as a whole. At Villanova, everyone motivates one another. You always know you’re cared about as an individual,” she says.

Throughout college, student-athletes are expanding their horizons and figuring out who they are as people. Academic Support works alongside coaches to help student-athletes identify what they are passionate about.

In the case of Jalen Brunson ’18 CLAS, his goal was to graduate a year ahead of schedule. Jalen, well-known to hoops fans for his stellar basketball skills, brought that same dedication and work ethic to his courses.

Jalen remembers that from the moment he arrived on campus, the Athletics Department worked closely with him to help smooth the transition to college academics and athletics. They also supported his academic goal by assisting him with scheduling summer classes that matched his degree’s graduation requirements.

“I give 100 percent effort all of the time,” Jalen says, “but the academic advisers have worked so much with me, helping me to become the best student, best athlete and best person I can be for myself and my team.”

Men’s Soccer captain Andreas Bartosinski ’18 COE came to Villanova from Cologne, Germany, part of the wave of international talent flowing into the collegiate soccer game. An ocean away from his family and friends, Andreas was welcomed with open arms as a member of a whole different kind of family.

“Everyone made it clear that if I was struggling in any respect—be it academically, athletically or socially—I could go to them for help,” Andreas says.

Throughout his time at Villanova, coaches, teammates and academic support staff have regularly reached out and, when needed, connected Andreas with resources such as tutors. That support has continued as he prepares to launch his career. Staff in the Athletics Department have helped him refine his résumé and connected Andreas with alumni working in the mechanical engineering field.

Brophy says that Villanova is one of the few schools where students like Andreas and Snyder can compete at the highest level in their chosen sport and still take on a demanding curriculum like engineering or nursing whose schedule may be less flexible.

“Villanova’s culture of collaboration and commitment to students helps make it possible,” she says.

Jackson agrees with Brophy— Villanovans prove they are stronger together. That unity draws on powerful Augustinian ideals and fosters champion athletes, as well as exceptional students. Bound together, driven to always greater heights, Villanovans achieve ever more.

“This is a tight-knit community. Students don’t just come to Villanova for four years. This is a decision that lasts a lifetime,” he says. 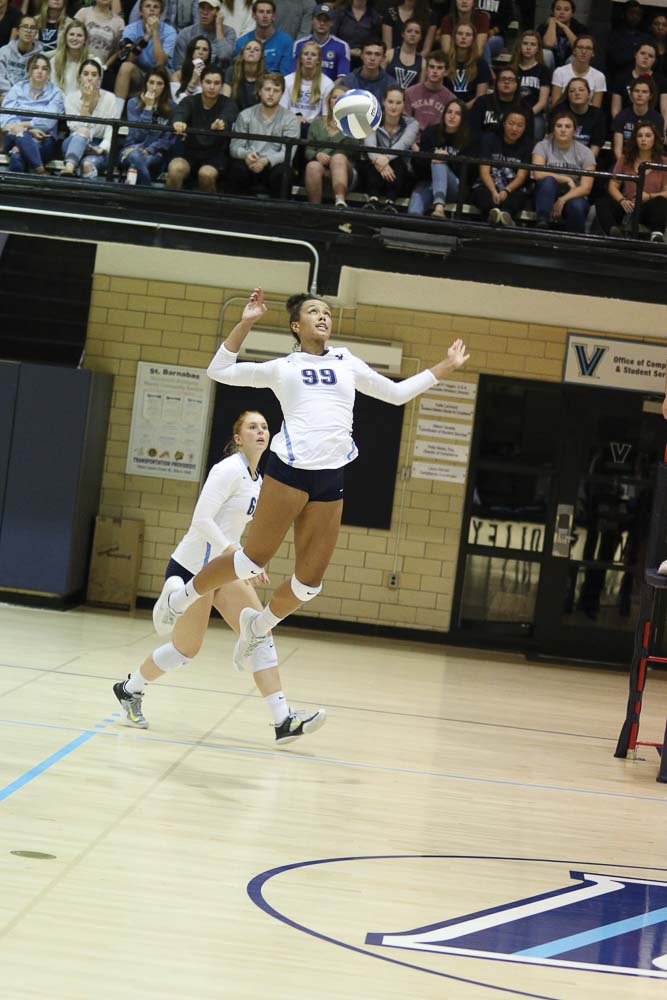 Amanda Pedersen-Henry ’19 CLAS is a standout player on the Women’s Volleyball team and was named to the 2016–17 Big East All-Academic Team.

Whether in uniform or in the classroom, Villanova’s student-athletes— more than 550 men and women competing on 24 teams—win the right way. Humble and driven, they strive for Villanova and for excellence. And they continue to build on the legacy of success established by those who came before them. Accolades announced in 2016–17 for the University’s student-athletes include the following: