The low down on Omega fatty acids

You’ve probably heard about Omega-3’s, but did you know that there are also Omega-6’s and Omega-9’s? All those numbers get confusing. Which is the best for your body and what is the difference between all of them? In a nutshell, the difference between each fatty acid is their molecular configuration. Each number corresponds to the number of carbon atoms they contain and designate where the double bond is. These differences allow each fatty acid to work in their own way, which is why one is not necessarily better than the other. They are all important! The low down on Omega fatty acids

Omega-3 fatty acids are extremely important for our health. One major reason is because they work as anti-inflammatories in our bodies and counteracts the effect of Omega-6’s. Our bodies cannot make Omega-3’s so it is important to get them from our diets. Good sources of Omega-3 include wild salmon, anchovies, walnuts, flaxseed and green leafy vegetables.

It is important to have a balance between Omega-3 and Omega-6 to prevent chronic diseases including diabetes and heart disease. You probably already get enough Omega-6 in your diet because it is found in soybean oil, sunflower oil, canola oil, and corn oil. These are common ingredients in the American diet.

Omega-9 fatty acids are the most abundant fatty acids in nature. Our bodies can make Omega-9’s on their own and you can also find it in olive oil and other vegetable oils. Our bodies use Omega-9 when we do no have a supply of Omega-3 or Omega-6. 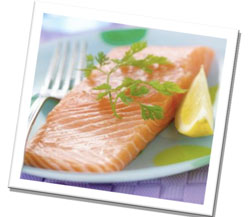 Which kind of Omega-3?

Omega-3 fatty acids can be broken down into three different categories: ALA, DHA, and EPA. EPA and DHA are anti-inflammatory. They help with heart health and mood and are found in fatty fish (salmon, mackerel). The plant source of Omega-3 is ALA. This is found in flax seed and flax seed oils. Foods that are enriched and marketed as “enriched with Omega-3’s” generally contain this form. Most people are deficient in EPA and DHA. Sometimes ALA can be converted to EPA and DHA, but unfortunately this is less likely when consuming an “American diet” high in animal protein, processed foods, and refined sugars. This means that we are lacking the benefits to our heart that come along with those fatty acids. Increase your consumption of fatty fish to protect your heart! At Villanova, we are proud to serve sustainable wild-caught salmon, high in Omega-3’s EPA and DHA.