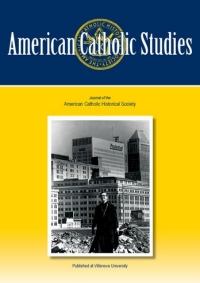 We are happy to inform you that the authors of all three articles found in this issue are at the beginning of what we hope will be long and productive careers in the emerging field of American Catholic Studies.

Michael Lombardo, a doctoral candidate at the University of Dayton, explores the controversy between America and the Encyclopaedia Britannica over the representation of Roman Catholics in the encyclopedia’s 1911 edition. Using history of the book methodology, the article discusses the issues involved, key players in the controversy, and the way in which a final resolution was achieved.

The relationship between the Catholic Church and the city of Milwaukee during the industrial era is discussed by Jason Hostutler, Mount Mary College, Milwaukee. Hostutler examines the ways in which the city’s captains of industry, Catholic and non-Catholic, became important benefactors of the Church in Milwaukee and its immediate suburbs. Religion was not just good for the soul; it was also good for business.

The ways in which Protestant churches and the press in the United States responded to the appointment of Myron Taylor as Franklin Roosevelt’s personal representative to Pius XII is the subject of Kyle Haden, OFM’s essay. A doctoral candidate at Fordham University, the author looks at the issues of anti-Catholicism and separation of church and state in relation to this issue.

Our cover essay by Thomas McCabe focuses on St. Benedict’s Prep, an important institution in the Catholic history of Newark, New Jersey. It’s a great story, and the photos add to the telling.

As always, we thank you for your support and encouragement; and we wish you all a happy and healthy 2010.