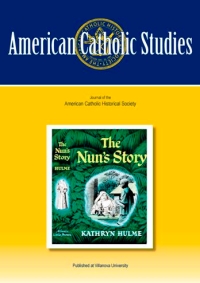 American Catholic Studies is pleased to invite you to examine our last issue of 2008. We hope you find it both interesting and enjoyable.

Elesha Coffman (Waynesburg University) has written on "The 'Religious Issue' in Presidential Politics." Professor Coffman examines the impact of religion on the elections of 1928, 1960, and 2004. She suggests that examining these campaigns (particularly Alfred E. Smith's run for the presidency in 1928) in light of multiple narratives can provide new insight into the worlds of both religion and politics. In light of recent events in our nation's history, I think you will find this a very timely essay.

The recognition of the government of the Union of Soviet Socialist Republics by the United Sates is the subject of Richard Gribble, C.S.C.'s (Stonehill College) article. Examining the writings of a number of contemporary Catholic authors, Father Gribble argues that by the time Franklin Roosevelt became president in 1933, most Catholic intellectuals were resigned to the renewal of diplomatic ties between the two countries.

Katie Oxx (McDaniel College) combines the fields of geography and religion in her discussion of Philadelphia's St. John the Evangelist Church. Dr. Oxx notes that St. John's illustrates the effect a Catholic presence had on the urban landscape of Philadelphia in the early nineteenth century.

We are pleased to be able to provide you with a symposium on The Faithful: A History of Catholics in America by James M. O'Toole (Boston College). Thanks to Chester Gillis, Margaret O'Brien Steinfels, and Rodger Van Allen for submitting their reviews and questions in a timely manner, and to the author for his willingness to respond to their queries.

As always, we invite you to let us know "how we are doing." Your comments and suggestions are both welcomed and appreciated.