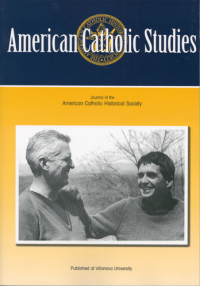 "And all the monkeys aren't in the zoo, everyday you meet quite a few." If that sentence doesn't puzzle you, but instead stirs you to put a tune with it, you will bring your own reflective experience to the reading of our lead article by Anthony B. Smith on Bing Crosby, religion and cultural pluralism in 1940s America. The brief quoted lyric is from "Swinging on a Star," the 1944 Academy Award winner for best song from a film Crosby as Father O'Malley sang it with a group of school children in "Going My Way." A Photo in Professor Smith's article captures that moment in the film The photo also graced the cover of the sheet music for the song, one that I grew up with. But you don't have to be of a certain age to appreciate Smith's article, for it is no mere nostalgia trip. Rather it is a serious analytical essay based on extensive research that will reward every reader.

Our second article, by Kristy Nabhan-Warren, focuses on Marian apparitions to Estela Ruiz, a middle-aged Mexican-American woman, who claims that Mary appeared to her from 1988-1998. The article offers a broad review of the literature on Marian apparitions, and is marked by its careful and respectful scholarship.

Distinguished historian Christopher J. Kauffman's article deals with Edward McSweeney, the Chairman of the Knights of Columbus Historical Commission 1921-1925, a time when the new Ku Klux Klan dominated many state legislatures and several governors' mansions. As Kauffman states: "The KKK energized the nativism, racism, anti-Semitism, and the drive for one-hundred percent Americanism that masked the intense intolerance of the period." Read how McSweeney and others responded to these forces.

We are pleased to offer also a good number of timely book reviews and the cover essay, "The Berrigans: History, Witness, Memory" by David J. O'Brien, Loyola Profess or Roman Catholic Studies at the vigor of Catholic intellectual life in America through the past four decades.

We are grateful to all of our authors and reviewers and proud of this issue of American Catholic Studies. Please make sure your library is a subscriber to our award-winning journal, and consider a gift subscription for a friend for 2004.