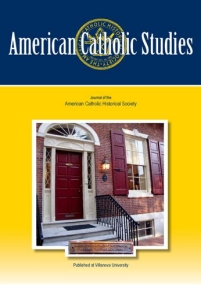 We do not usually begin "About This Issue" with a description of the cover photos and their accompanying essay; but this issue of American Catholic Studies commemorates the 125th anniversary of the American Catholic Historical Society. Our cover essay by Rodger Van Allen focuses on the society's founding and highlights some key events and figures in the history of the ACHS.

In addition to Professor Van Allen's cover essay, you will find three very interesting articles within these pages. "Pamphleteering against Prejudice: The Catholic Press Attacks Jim Crow in Twentieth-Century America" by R. Bentley Anderson, S.J. (St. Louis University) examines the ways in which racial issues were addressed by the Catholic press in the United States during the mid-twentieth century.  American Catholics – like all Americans – held many different views related to civil rights and racial equality, and Anderson demonstrates the efforts made by various Catholic writers to explain the church's teachings in the area of race relations.

Glen Gendzel (San Jose State University) writes about Catholics and Senator Joseph McCarthy in "Pride, Wrath, Glee, and Fear: Emotional Responses to Senator Joseph McCarthy in the Catholic Press, 1950-1954." By documenting the many different responses to McCarthy found in the Catholic press, Gendzel sheds new light on the relationship between United States Catholics and the senator from Wisconsin.

"Lay People Can Teach": Rural Life, Edwin O'Hara, and the Confraternity of Christian Doctrine, 1920-1960" by John Bieter (Boise State University) reminds us that there has been a vibrant and active program to provide religious education for Catholic students attending public school since the early years of the twentieth century. It is a subject that deserves more attention, especially as CCD continues to play an important role in American Catholic religious education.<

We are happy to participate in the celebration surrounding the 125th anniversary of the American Catholic Historical Society. The society, of course, sponsors American Catholic Studies, and we are grateful for all of the support and encouragement we have received from the officers and members over the years. Here's to 125 more years of the ACHS!