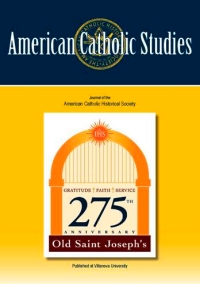 We hope you enjoy Volume 119, No. 2 (Summer 2008) of American Catholic Studies. You will find that the articles contained in this issue deal with several figures and issues central to American Catholicism.

Arnold Sparr (St. Francis College, Brooklyn) provides readers with a study of "'The Most Memorable Labor Dispute in the History of U.S. Church-Related Institutions': The 1949 Calvary Cemetery Workers' Strike against the Catholic Archdiocese of New York." Some of our readers will be familiar with the story of the strike and Cardinal Francis Spellman's use of seminarians as strikebreakers. Dr. Sparr not only tells the story of the strike and notes its place in American Catholic history of the 1940s and 1950s; he discusses it within the context of Catholic Social Teaching as well.

Walter J. Burghardt, S.J., and his response to Humane Vitae is the subject of Samuel J. Thomas' (Michigan State University) article. Professor Thomas details the encounter between Burghardt and Henry Soenneker, Bishop of Owensboro, Kentucky over the eminent theologian's dissent from the 1968 papal encyclical on birth control.

The influence of Father John Fletcher's work on Archbishop John Carroll is documented by Thomas W. Jodziewicz (University of Dallas). Fletcher's work impacted Carroll's own apology for his religion, and the first American archbishop was convinced it would be helpful to anyone hoping to counter Protestant arguments against Catholicism.

Bobbye Burke, archivist for Old St. Joseph's Church, Philadelphia, was asked to write the cover essay for this issue of American Catholic Studies several months ago. Although she was undergoing chemotherapy at the time, Mrs. Burke – to the surprise of no one who knew her – agreed to write about the history of Old St. Joseph's, the first Catholic Church in Philadelphia (275 years old) and its place in the American story. Bobbye Burke passed away on April 18, 2008, leaving her essay on Old St. Joe's "almost finished." We are pleased to publish it here as a way to remember Bobbye Burke and her valuable work uncovering the history of early American Catholicism. Have a wonderful summer, and enjoy this issue of American Catholic Studies.