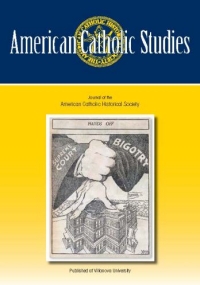 American Catholic Studies is not exactly "beach reading," but we do hope you take some time to enjoy the summer 2006 issue.

"'A Well-Balanced Education': Catholic Women's Colleges in New Jersey, 1900-1970," by Fernanda Perrone (Rutgers University), is a valuable contribution to the growing literature on the history of Catholic higher education. Recent scholarship has demonstrated the importance of regional studies for those working in the area of American Catholicism. Perrone's study makes it clear that many more studies of this sort are needed if we are to truly understand the history of Catholic women and Catholic higher education.

Rodger Van Allen, co-editor of American Catholic Studies (Villanova University), offers a new interpretation to an old story in "What Really Happened?: Revisiting the 1965 Exiling to Latin America of Daniel Berrigan, S.J." Was Francis Cardinal Spellman involved in the events that led to Berrigan being assigned to Latin America following the death of Roger LaPorte? If not, what really happened? Van Allen uses oral history as one important source of information as he offers a fresh interpretation of this story.

"Advocate for Ethnic and Religious Diversity: The Ecumenical Spirit of Archbishop Edward Hanna," by Richard Gribble, CSC (Stonehill College), provides readers with a new look at the popular archbishop of San Francisco. By focusing on Hanna's outlook on immigration and anti-Semitism – topics that remain relevant today – Gribble allows us to see another side of an important figure in the history of California Catholicism.

We have just been informed that American Catholic Studies has received four awards from the Catholic Press Association. Anne Butler, Richard Gribble, CSC, and Robert Ellsberg received awards for articles appearing in the journal during 2005. The journal itself received First Place for General Excellence in the category of "Scholarly Magazines." We will provide more information about these awards in our next issue, but we wanted you to have the headlines as they came "off the press."

Enjoy this issue of American Catholic Studies, and have a safe, relaxing, and productive summer.