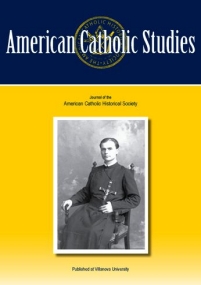 In our lead article, "Meeting Multiple Demands: Catholic Higher Education for Women in Chicago, 1911-1939," Ann Marie Ryan (Loyola University, Chicago) compares four diverse Catholic institutions, finding that the expansion of higher education for women was driven largely to prepare sister teachers.  It was also driven, however, by the demand of Catholic women who had educational aspirations beyond those considered acceptable at the time.

"From the Melting Pot to the Multicultural Table: Filipino Catholics in Los Angeles," by Kathleen Garces-Foley (Marymount University) explains how the American Catholic Church's response to ethnic diversity and immigration has evolved during the past century form assimilation to cultural pluralism to multiculturalism.  She examines this changing stance through the experience of Filipinos in the Archdiocese of Los Angeles.

The story of the Sister Formation Conference (SFC) has drawn the attention of a number of historians.  Founded in 1954, the SFC changed its name in 1976 to the Religious Formation Conference (RFC) when it included secular institutes and congregations of male religious.  Regina Siegfried, ASC, who teaches a group of inter-community novices in St. Louis, explains the Conference's stress on educating religious for their role in an increasingly global society.

William Portier (University of Dayton) in his cover essay, "Divided Friends: Portraits of the Roman Catholic Modernist Crisis in the United States," says that the modernist crisis "ripped through Catholic intellectual life like a tragic storm."  He tells us of John R. Slattery and Denis J. O'Connell, and William L. Sullivan and Joseph McSorley, two pairs of friends, caught in the midst of this tragic storm.  Review the pictures of these four priests and let Portier describe the agonized personal decisions that set friend against friend.

Our bi-annual selection of dissertation abstracts appears in this issue, and a nice range of timely book reviews.

There is one more item to note.  Nine years ago, Monsignor Timothy M. Dolan, then at the North American College in Rome, joined the Publication Committee of American Catholic Studies.  A professional historian, he is the author of Some Seed Fell on Good Ground: the Life of Edwin V. O'Hara (The Catholic University Press of America, 1992) and other books and articles.  He has conscientiously served as a reader of manuscripts in his field, even while serving as the Archbishop of Milwaukee.  Pope Benedict XVI has now named him to succeed the retiring Cardinal Edward M. Egan.  His installation as the Archbishop of New York is scheduled for April 15.  In his new position of service and leadership, he has the prayers and best wishes of American Catholic Studies and the American Catholic Historical Society.