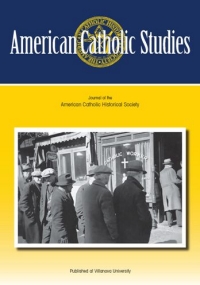 Alert readers of American Catholic Studies will note that a new line of identification is found on the inside front cover.  After the statement that ACS is the journal of the American Catholic Historical Society, a line of italicized print states that you are reading "the oldest, continuously published Catholic scholarly journal in the United States."  No one knows better than its current co-editors the debt of gratitude that is owed to those who through their long years of support and work have brought us to the 118th volume of publication.  As we say "thank you" for the past, we also want to acknowledge our recent contributors whose articles have won seven awards in the last four years, and have brought the journal in 2006, the first place General Excellence Award for Catholic scholarly journals in the Catholic Press Association's refereed competition.

"The Transformation of a U.S. Missionary: The Recollections of Bishop Nicholas D'Antonio on His Ministry in Honduras" by Edward T. Brett (LaRoche College) tells the story of a U.S. Franciscan missionary whose thirty years of service found him the object of a murder plot in 1975.  Richard Gribble, CSC, (Stonehill College) in "Daniel Hudson, CSC, and the American Catholic Hierarchy, 1884-1899," reports on the influential editor of Ave Maria weekly magazine, a leading voice during the pivotal period of American Catholic history.  Paul Kahan, a doctoral candidate at Temple University, tells the story of the "Latin Question" and the rivalry between American Jesuits and Christian Brothers, and their two competing visions of Catholic education.

Commonweal managing editor Patrick Jordan's cover essay, "A Work of Many Hands" shares an insight into four lesser known but very significant figures in the history of the Catholic Worker.  Fourteen book reviews and a selection of dissertation abstracts completes this issue.