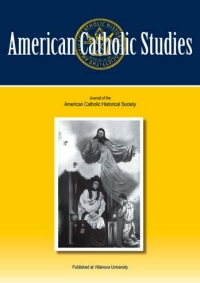 Our lead article is contributed by Myja R. Thibualt (Virginia Commonwealth University), who shares his careful analysis of an African-American Catholic parish in Virginia both before and after the Second Vatican Council.  His close examination proves quite interesting, both in its methodology and findings.

In "Catholic Education in Progressive-Era San Francisco: Theory and Practice," Richard Gribble (Stonehill College) tells us of Father Peter Yorke and Archbishop Edward Hanna, who through their different roles, led the drive to advance Catholic education in San Francisco between 1900 and 1935.

The distinguished scholar Gerard S. Sloyan, currently teaching at both Georgetown and The Catholic University of America, writes of Monsignor John Montgomery Cooper (1881-1949) who had a major impact on religious instruction in Catholic higher education, and in the field of Anthropology while embodying the ideal of the diocesan priest academic, something the writer has also embodied.

Our cover essay is contributed by co-editor Margaret M. McGuinness (LaSalle University) who writes of Eastern State Penitentiary in Philadelphia.  The story is instructive and rewarding, and the photos are really special.

Reviews of eleven books and our twice a year sharing of notable dissertation abstracts complete the issue.