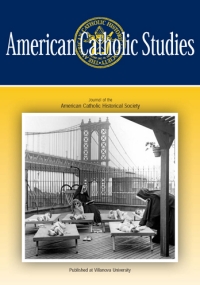 This issue of American Catholic Studies, we think, is a good example of how we strive to publish articles that relate to all areas of Catholic Studies in the United States.  In “Biblical Christianity as a Category in Nineteenth-Century American Apologetics,” William Shea (College of the Holy Cross) examines the debates between Restorationist Alexander Campbell and Cincinnati Archbishop John Purcell in an attempt to determine just how different Catholics and evangelical Christians are.  This debate, of course, continues into the twenty-first century, and Shea’s work nicely relates this historical account to the present issues in Catholic-evangelical relations.  John T. Donovan’s article, “The American Catholic Press and the Cold War in Asia: The Case of Father Patrick O’Connor, S.S.C. (1899-1987)” will appeal to those interested in the history of the United States during the 1950s and 1960s.  As a journalist who covered the Korean and Vietnam conflicts, O’Connor clearly influenced American Catholic ideas about Communism during the Cold War era.  Sr. Madeleine Grace, CVI (University of St. Thomas, Houston) writes about two men who are very significant in the history of Catholicism in the Americas: Jean de Brébeuf and Isaac Jogues.  It is important to remember that those missionaries facing martyrdom today are part of a long line of men and women who have risked their lives to preach the gospel in “strange lands.”

We are very happy to announce that American Catholic Studies has been recognized by the Catholic Press Association at its 2004 annual meeting, and is the recipient of two awards.  Timothy Neary’s article, “Crossing Parochial Boundaries: Interracialism in Chicago’s Catholic Youth Association, 1930-1954” (Vol. 114, No. 3) received first place in the category, “Best essay, scholarly magazines.”  In addition, the journal received second place in the category, “General excellence, Scholarly magazines.”  We congratulate Dr. Neary on his accomplishment, and we thank all our contributors for helping us maintain the quality of the journal.  We, of course, also thank you, our readers, for your continued support.