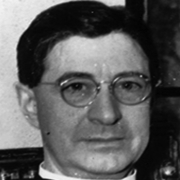 Father Mortimer Augustine Sullivan was born in Lawrence, Massachusetts, on 2 January 1887. He entered the Augustinian novitiate at Villanova, Pennsylvania in 1904 and two years later went to Rome to study at the International College of Saint Monica. He was ordained to the priesthood in Rome in 1909.

After ordination Father Sullivan returned to the United States where he served as an assistant at Saint Laurence's parish in Lawrence, Massachusetts; at Saint Rita's in Philadelphia, Pennsylvania, and at Immaculate Conception in Hoosick Falls, New York. From 1914 to 1917 he was a member of the Augustinian mission band. He also served as a chaplain in the United States Navy during the First World War.

At the Chapter of 1932 Father Sullivan was elected Prior Provincial of the Province of Saint Thomas of Villanova. After serving two terms in this office, he became Prior and Pastor at Saint Nicholas of Tolentine in Atlantic City, New Jersey. He served again as Provincial from 1944 to 1949. During his last term as Provincial, Merrimack College in Andover, Massachusetts, was established, and negotiations were proceeding for the opening of Carroll High School, Washington, D.C.

Father Sullivan was 62 when he died in Atlantic City Hospital, Atlantic City, New Jersey, on 13 July 1949. He is buried in the Augustinian Community plot of the Saint Mary's cemetery in Lawrence, Massachusetts.