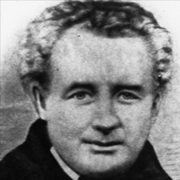 Father William Harnett was born in Philadelphia, Pennsylvania, in 1822. He was the first American-born to enter the Augustinian Order in the Province of Saint Thomas of Villanova. He entered the novitiate and continued his studies in Italy, where at Genazzano his Novice Master was Blessed Stephen Bellesini. He returned to the United States in 1843 and taught Latin and Greek at Villanova College. He was ordained to the priesthood in 1844 by Bishop Francis Patrick Kendrick of Philadelphia.