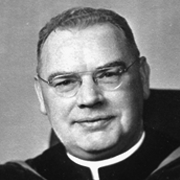 Father James Donnellon was born in Niagara Falls, New York, in 1906, and was raised in Lawrence, Massachusetts. He graduated from Augustinian Academy, Staten Island, in 1924 and from Villanova College in 1930. He pursued his theological training in Washington, D.C. at Augustinian College, and the Catholic University, and was ordained a priest in June 1932.

Father Donnellon received an M.S. and a Ph.D. in Biology from the University of Pennsylvania in 1936 and 1938, respectively. He also did graduate studies at Harvard Medical School and at the Marine Biological Laboratory at Woods Hole, Massachusetts.

Father Donnellon taught Biology at Villanova College, where he was also chairman of the department at Fordham University. In 1954 he was named president of Villanova College. In June 1959 he was elected Provincial of the Province of Saint Thomas of Villanova and served in that capacity until 1965. He was then appointed Prior of the Augustinian Monastery at Villanova.

Father held many professional memberships, as a member of the advisory Panel of the Joint State [of Pennsylvania] Government Commission of the New York Academy of Sciences, and of the International Biometero Logical Study Commission. He received honorary doctorates from La Salle College, Philadelphia; Merrimack College, North Andover, Massachusetts; and Saint Joseph's College, Philadelphia, Pennsylvania.