-In the first 20 years of the Curvey Scholars Program, 41 students from Schuylkill County (Pa.) have graduated from Villanova with 15 others currently enrolled at the University 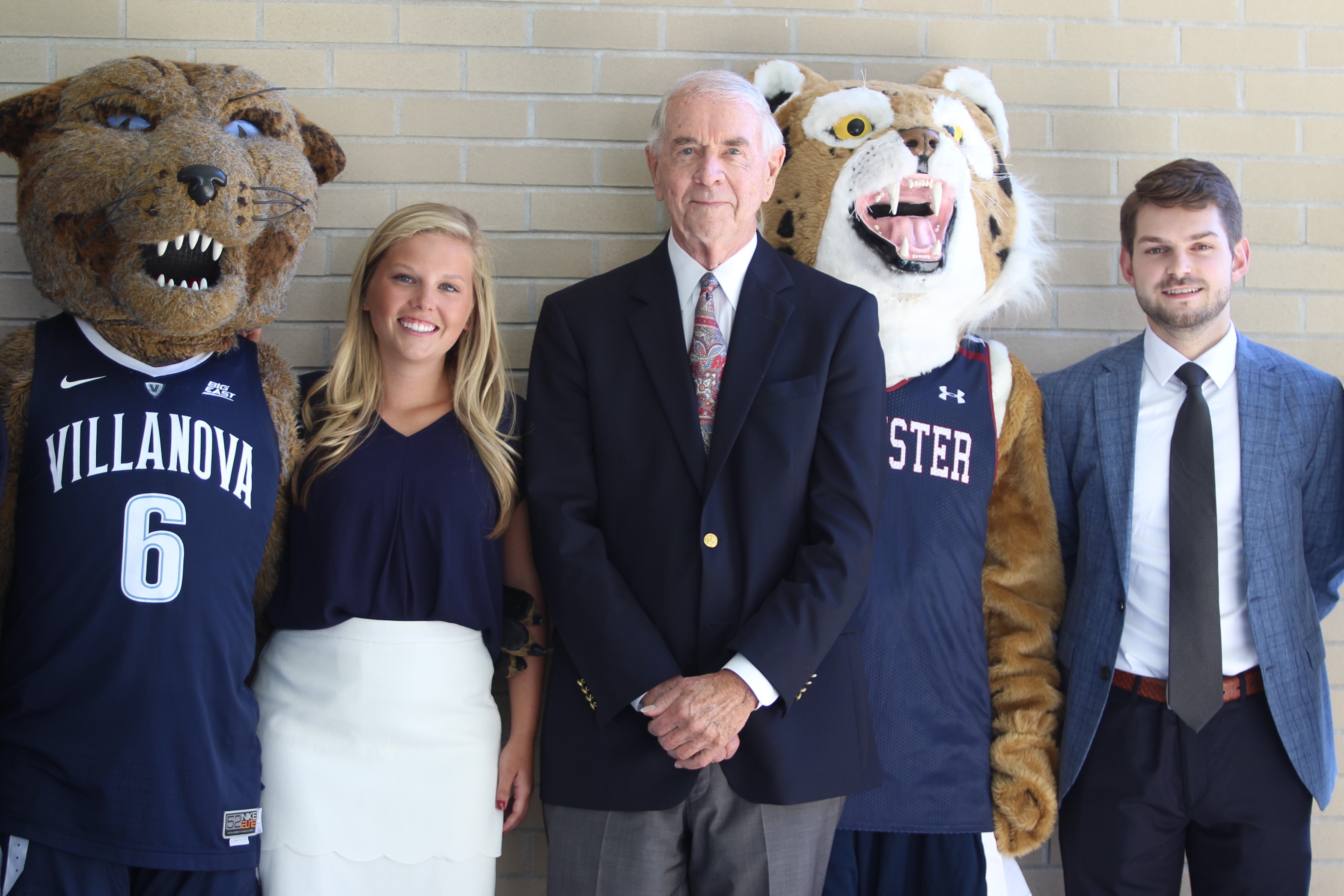 VILLANOVA, Pa.—Villanova University alumnus James C. Curvey '57 VSB, has added to his giving legacy of scholarship support, committing $2.8 million to create a scholarship for students from Brewster Academy in Wolfeboro, New Hampshire to attend the University, and provide essential programmatic support for donor-endowed scholarship programs. With this gift, he has increased his lifetime contributions to his alma mater to more than $11 million. Two decades ago, a gift from Curvey created a scholarship program for students from his hometown of Mahanoy City, Pa. to attend Villanova University. As the Curvey Scholars Program marks its 20th anniversary, 56 students from Mahanoy City and four nearby high schools in Schuylkill County, Pa., have now come to Villanova through the program.

As part of Curvey’s recent $2.8 million gift, a new scholarship was created for one student per year to attend Villanova from Brewster Academy, where he serves on the board of trustees. In addition to this new scholarship, the gift provides programmatic support for the Curvey Scholars Program and other prestigious donor-funded scholarships through a new named endowed position—the James C. Curvey Assistant Director of Endowed Scholarship Services.

“Scholarship is just one component of providing students access to a Villanova education,” says Curvey. “To ensure their success once they arrive on campus, we must provide them with a robust network of support. This position provides a centralized point of contact at the University—someone who is invested in their success and can work with them to help them meet their goals and reach their full potential.”

Through Curvey’s generous support, the Curvey Scholars Program began in 1999 with the first student enrolling at Villanova. As part of the program, four graduating seniors each year from five eligible Schuylkill County high schools are selected to receive partial scholarships at Villanova—on top of the University’s financial assistance package. The Schuylkill County high schools included as part of the program are Mahanoy Area, Marian Catholic, Nativity BVM, North Schuylkill and Shenandoah Valley. All applicants to the University from these schools are considered for the Curvey Scholars Program. To date, 41 Curvey Scholars have graduated from Villanova, with 15 others currently enrolled.

A unique complement to The Curvey Scholars Program is the Curvey Fellowship, which provides resources for a focused period of independent study. This component provides selected Curvey Scholars with a post-graduation fellowship of up to $20,000 to travel internationally, enhancing their personal and academic growth and developing and gaining an invaluable life experience.

“It has been an absolute honor and privilege to see so many students from Mahanoy City and Schuylkill County come to Villanova and thrive. These are amazing individuals, whose experiences at Villanova over the last 20 years have helped put them on a path to achieve greatness,” said Curvey. “I look forward to seeing what the future holds at Villanova for all of the Curvey Scholars from Schuylkill County and Brewster Academy.”

“Through the Curvey Scholars Program, Jim continues to transform the lives of scores of Villanovans,” said Michael O’Neill, Senior Vice President for University Advancement. “His generosity extends far beyond his philanthropic contributions to the University—he been a mentor to these students, helping them realize their full potential. Jim’s new gift elevates his commitment to making a Villanova education possible for students—and supporting these scholars during their educational journeys. The creation of a visionary new endowed position will add to an already remarkable system of support for Curvey Scholars and will benefit other donor-funded endowed scholarships as well.”

Curvey is a vice chairman of the Board of Directors of FMR LLC, the holding company for the businesses of Fidelity Investments. He retired from day-to-day work at Fidelity Investments in December 2002, after a 20-year career in which he served in a number of roles, including president and chief operating officer. Prior to joining Fidelity, Curvey was vice president of Human Resources for Chase Manhattan Bank. He received a Bachelor of Science degree from Villanova University in 1957 and a Master of Arts degree from George Washington University in 1962. In 1999, he was selected as one of the Top 25 Managers of the Year by BusinessWeek magazine. Curvey also received an honorary Doctor of Commercial Science degree from Villanova University in 1999.

Curvey’s involvement with Villanova spans decades. He is a former member of the University’s Board of Trustees and served as Vice Chair of a previous University capital campaign, "Transforming Minds and Hearts: The Campaign for Villanova," which launched in 2004 and concluded in 2007.