-Adam Langley, PhD, associate professor of Biology at Villanova, was a principal investigator in the study, partnering with scientists from the Smithsonian and Virginia Institute of Marine Science. 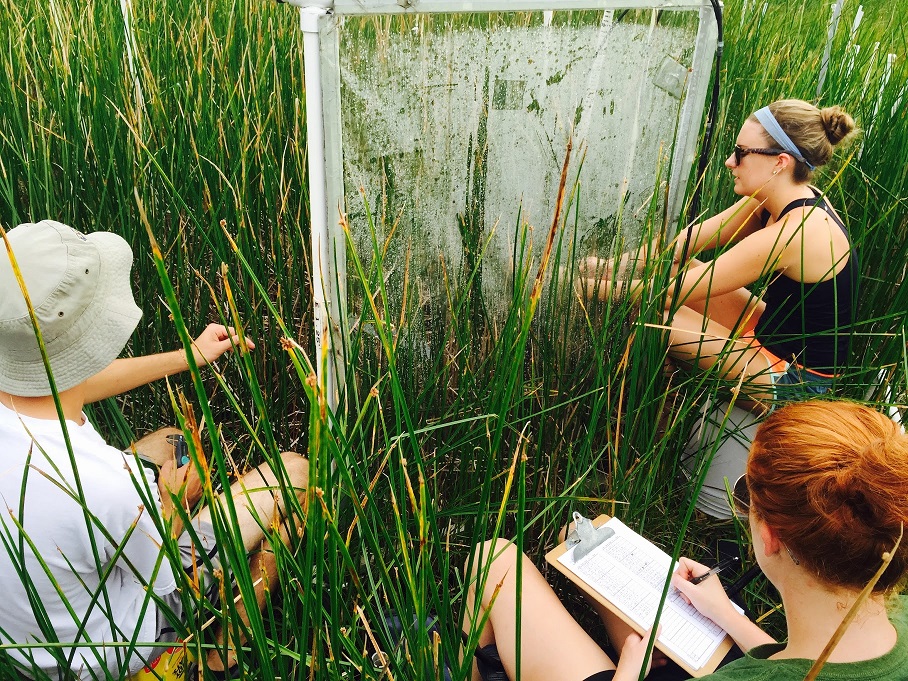 Villanova Biologist Adam Langley and a group of undergraduate and graduate students team up with Smithsonian researchers to carefully measure the plants in exactly the same way each year.

VILLANOVA, Pa.—For many plants, carbon dioxide acts like a steroid: The more they can take in, the bigger they get. But in a new study published Sept. 25 in Nature Climate Change, scientists discovered something strange happening in marshes. Under higher levels of carbon dioxide, instead of producing bigger stems, marsh plants produced more stems that were noticeably smaller.

Villanova University Biologist Adam Langley, PhD, was a principal investigator in the study—partnering with scientists from the Smithsonian Environmental Research Center and the Virginia Institute of Marine Science.

For years, scientists had known that carbon dioxide was bulking up the total biomass of marsh plants, so it seemed natural to think individual plants were getting bigger too. However, the research team discovered something surprising.

“Rising CO2 is predicted to make plants grow more, but here we found the counterintuitive result that it makes some plants appear smaller,” said Langley, an associate professor of Biology in the College of Liberal Arts and Sciences. “But what looks like one plant, may actually be one small part of a much larger superorganism. The focus of our study is a sedge that is clonal, meaning it spreads horizontally by producing genetically identical stems from a single connected root system.”

Clonal plants, like many grasses and aspen trees, are common in nature, and are particularly important in coastal marshes where their communal architecture helps them resist the stressful environment and hold soil together. Because many “individual” stems of a clonal plant may actually be connected belowground, the strategies of how they respond to environmental changes can be very different from nonclonal plants.

Meng Lu, a research professor at China’s Yunnan University and lead author of the new study, made the discovery while a postdoc at the Smithsonian Environmental Research Center (SERC). He worked on a tidal marsh called the “Global Change Research Wetland,” home to one of the longest-running field experiments on climate change in the world. Inside experimental chambers, Smithsonian scientists have been raising carbon dioxide for more than 30 years. They are tracking how marsh plants grow in a world with carbon dioxide levels nearly twice as high as today—levels we could see by the end of the century.

Langley started the second experiment, adding extra nitrogen and CO2, in 2005 while serving as a postdoc at SERC, working with Pat Megonigal, SERC’s senior scientist who oversees the Global Change Research Wetland and a co-author of the paper. Langley and a group of Villanova undergraduate and graduate students team up with Smithsonian researchers to carefully measure the plants in exactly the same way every year.

“Here, we found that these clonal plants produce smaller, but more numerous, stems when exposed to future concentrations of CO2,” added Langley. “We show that this strategy is partly in response to nutrient limitation—where we add nitrogen in the second experiment, the plants behave more like individuals again and grow larger stems.”

“If we get more carbon, we need more nitrogen to feed the plants,” Lu said. According to Lu, carbon dioxide and nitrogen are like food for plants. If carbon dioxide provides their sugar, nitrogen provides their protein. Without nitrogen, the extra carbon dioxide will not spur the plants to grow bigger stems. Instead, the plants will spread their roots farther belowground, attempting to draw more nitrogen from the soil. And because most marsh plants are clonal, they naturally send up more stems aboveground as their roots spread. This means more stems rather than bigger ones.

“We knew that giving plants more nitrogen favors shoot growth over root growth, and vice-versa for carbon dioxide, but we never considered what this means for the numbers and sizes of plants,” said SERC's Pat Megonigal. “We think that shrinking stems may be occurring in many other ecosystems with clonal plants.”

This may be good news for the marsh and for people living nearby. Having a thicker wall of stems—even shorter ones—strengthens the marsh’s defense against hurricanes and other storms. Denser roots, another side effect of the high carbon dioxide, could be another plus. Roots enable a marsh to build soil. When a marsh builds soil, its entire elevation goes up, giving it a chance of outpacing sea level rise.