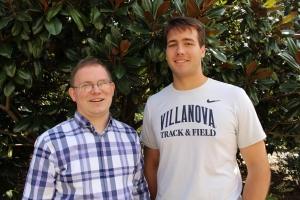 VILLANOVA, Pa. — Villanova University Assistant Professor of Physics, Joey Neilsen, PhD, and his student Jadyn Anczarski, ’20 College of Liberal Arts and Sciences, who were a part of the team to capture the first image of a black hole earlier this year, have won the Breakthrough Prize in Fundamental Physics for the work. The $3 million prize will be split among the 347 authors of the original papers by the Event Horizon Telescope (EHT) Collaboration. The Breakthrough Prize, known as the “Oscars of Science,” annually recognizes achievements in the Life Sciences, Fundamental Physics and Mathematics, disciplines that ask the biggest questions and seek the deepest explanations.

"We were thrilled to be a part of this groundbreaking work,” says Neilsen. “It was so exciting to see the black hole’s shadow for the first time, and to count ourselves among the prizewinners is a wonderful surprise.”

“It was a real honor to work on this project as an undergraduate student,” says Anczarski. “I am very thankful to Dr. Neilsen for the opportunity, and to the collaboration for sharing the award."

Neilsen and Anczarski contributed analyses of X-ray observations on behalf of the EHT’s Multiwavelength Working Group.

“X-ray observations help connect the dots between high energy emission and the behavior of matter near the event horizon,” Neilsen said at the time of the announcement in April.

About the Breakthrough Prize: For the eighth year and renown as the “Oscars of Science,” the Breakthrough Prize will recognize the world’s top scientists. Each prize is $3 million and presented in the fields of Life Sciences (up to four per year), Fundamental Physics (one per year) and Mathematics (one per year). In addition, up to three New Horizons in Physics and up to three New Horizons in Mathematics Prizes are given out to junior researchers each year. Laureates attend a live televised award ceremony designed to celebrate their achievements and inspire the next generation of scientists. As part of the ceremony schedule, they also engage in a program of lectures and discussions.