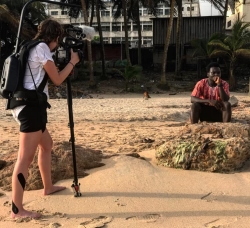 VILLANOVA, Pa. — Sankofa, a documentary produced by students at Villanova University has been named as a finalist for the Student Academy Awards in the Documentary/Domestic Film Schools Category. Winners will be announced October 17, 2019 at the Samuel Goldwyn Theater in Beverly Hills, Calif. This is the fourth time that a Villanova student-produced documentary has been selected as a finalist.

Created and produced by 21 Villanova students under the name Riptide Pictures, Sankofa tells the story of mental slavery and its negative systemic impact on black males across the world. The film explores the complexities and parallels between the United States and Ghana to illuminate the prevalence of mental slavery internationally. Riptide Pictures shot on location in Ghana and the U.S. during the fall of 2017. Since the documentary debuted in May 2018, a number of the students have gone on to pursue careers and work in the film and entertainment industries.

“For Riptide Pictures to attain this status is big because it not only tells us that we made a good film, but that viewers actually want to hear honest stories no matter how hard that truth may be,” said Princess Garrett, ’18 College of Liberal Arts and Sciences (CLAS) and director of the film. “It lets us know that the world is becoming more open to showing and discussing these once-taboo topics.”

In addition to the Student Academy Awards, Sankofa has been selected to seven film festivals worldwide, receiving first place in the Student category at the 2019 San Francisco Black Film Festival.

Riptide Pictures was formed in the Social Justice Documentary course offered by the Department of Communication in Villanova’s College of Liberal Arts and Sciences. The course gives students an opportunity to create documentary films that spotlight a contemporary social justice issue. The class is made possible through the support of Villanova’s Waterhouse Family Institute for the Study of Communication and Society.

The Student Academy Awards is an international student film competition conducted by the Academy and the Academy Foundation. The Academy established the Student Academy Awards in 1972 to support and encourage excellence in filmmaking at the collegiate level. Each year over 1,700 college and university film students from all over the world compete for awards and cash grants, with films being judged in seven categories.