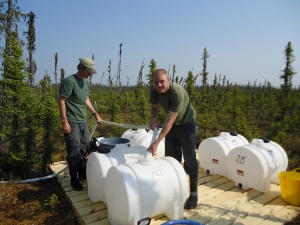 VILLANOVA, Pa.—Three Villanova University researchers, part of a team that through a five-year study in Alberta, Canada determined the “critical load”—or recommended maximum amount of nitrogen that can enter the region’s peat bogs through precipitation without causing damage to its ecosystem—have released their findings in an article published June 18 in Ecological Monographs.

Titled “Experimental Nitrogen Addition Alters Structure and Function of a Boreal Bog: Critical Load and Thresholds Revealed,” the article details how R. Kelman Wieder, a professor in Villanova’s Department of Biology, Melanie Vile, an assistant professor in Villanova’s Department of Geography and the Environment, and Kimberli Scott, Research Associate in Biology, worked together with researchers from Southern Illinois University* in experimentally applying nitrogen-enriched simulated rainfall to a pristine bog in order to quantify plant, soil and chemical responses. The group recommended that the critical load of nitrogen should be set at 3 kg of nitrogen per hectare per year.

They also discovered that, in comparison, development of the region’s vast Oil Sands Administrative Area, which mines or drills for bitumen—a heavy, thick oil that coats grains of sand and other minerals in a deposit that covers about 54,900 square miles—has increased the atmospheric nitrogen deposition in rain and snow in that area to 17 kg per hectare per year, almost six times that of the researchers recommended critical load.

“Nitrogen and sulfur oxide emissions from diesel trucks used in oil sands mining and from oil upgrader stacks return to what was once a pristine boreal landscape as acid rain,” Wieder explained. “In pristine Alberta bogs, Sphagnum mosses cover nearly 100 percent of the peat surface. These mosses take CO2 out of the atmosphere through photosynthesis and store this carbon as peat.”

But, when challenged by high levels of nitrogen like those produced by the oil sands mining operations, changes in the vegetational composition of the bogs lowers the strength of the bog’s CO2 sink function, with implications for climate change, according to Wieder.

In addition, the Northern Alberta landscape, home to over 400 plant species, some of which are endangered or threatened, could upset the ecological balance for wildlife that inhabit the area.

The most straightforward approach to minimizing the negative impacts of oil sands development on bogs is to lower nitrogen emissions from both diesel-fueled fleet vehicles and upgrader stacks, Wieder said. “Better technological approaches and a will to implement them industry-wide will be key.” The research team plans to continue studying the area, he added.

“This was an ambitious research project, conducted collaboratively with researchers from Southern Illinois University under the direction of Dr. Dale Vitt,” Wieder said. “Many graduate students, undergraduate students, and research technicians worked on this project.  It was a pleasure to work with such a dedicated and talented group of people whose commitment, enthusiasm, and team spirit made this project a joy from start to finish.”

The study was funded by grants from the Cumulative Environmental Management Association.