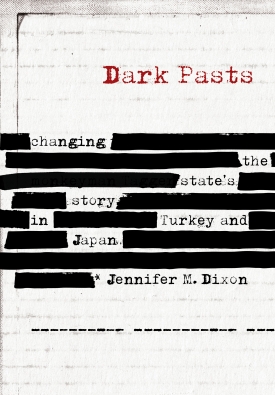 VILLANOVA, Pa. ­— Many countries have dark pasts, ranging from colonialism and slavery to ethnic cleansing, genocide and mass killing. Some have tried to come to terms with their histories by taking steps toward acknowledgment, apology and commemoration. In other cases, however, perpetrators stay silent, denying and rationalizing atrocities in their pasts.

The book was recently selected as a co-winner of the 2019 Dr. Sona Aronian Book Prizes for Excellence in Armenian Studies. The latter are awarded annually by the National Association for Armenian Studies and Research and recognize outstanding scholarly works in the English language in the field of Armenian Studies.

Intrigued by variations in whether and how states deal with skeletons in their closets, Jennifer Dixon, PhD, Assistant Professor of Political Science, investigates how and when states’ stories about past atrocities change over time. Focusing on Turkey’s narrative of the Armenian Genocide and Japan’s narrative of the Nanjing Massacre, she set out to understand when and why countries change the stories that they construct about past atrocities. Her analysis is laid out in her new book, Dark Pasts: Changing the State’s Story in Turkey and Japan, which is published and available now from Cornell University Press.

The Armenian Genocide took place in the Ottoman Empire between 1915 and 1917, against the backdrop of World War I. In the genocide, an estimated 800,000 to 1.5 million Ottoman Armenians were killed. The Nanjing Massacre occurred in the context of World War II, between late 1937 and early 1938, when an estimated 100,000-200,000 Chinese were killed by the Japanese army.

To conduct her analysis, Dixon looked at official speeches, statements, commemorative activitiesand publications, as well as government-approved history textbooks, over a 60-year period beginning in 1950. To identify and compare changes and continuities in each state’s narrative, she constructed a conceptual framework that includes the range of possible elements of a state’s narrative, from denying and silencing to commemorating and offering compensation. She then examined what was or was not said over time and used her framework to identify points of substantive change and periods of continuity in each state’s story.

The analysis revealed that, in spite of increasing calls for states (and others) to face their pasts, “Change is not simple, straightforward or immediate,” reports Dixon. Instead, states’ narratives of dark pasts exhibit strong continuities and change is contingent on interactions between a set of domestic and international political factors. One of the book’s central findings is that international pressure increases the likelihood of change, but domestic factors – such as electoral concerns and domestic activism – shape the content of change in states’ narratives. On the flipside, if government officials fear that greater acknowledgment might strengthen demands for territory, property, restitution, or reparations, then change in the direction of greater acknowledgment and contrition is less likely. Similarly, if a state’s narrative is connected to key national narratives, then officials are going to be reluctant to change the narrative, since to do so might destabilize elements of national identity.

Combining historical richness and analytical rigor, Dark Pasts unravels the complex processes through which international pressures and domestic dynamics shape states’ narratives and the ways that state actors negotiate between domestic and international demands in producing and maintaining such narratives. In so doing, the book sheds light on the persistent presence of the past and reveals how domestic politics functions as a filter that shapes the ways in which states’ narratives change – or don’t – over time.