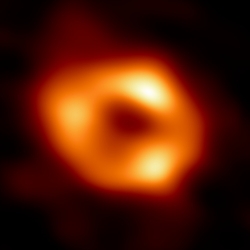 This image of Sagittarius A* released Thursday is the first visual evidence of the black hole at the center of our galaxy. Credit: Event Horizon Telescope collaboration

As cutting-edge science and technology begin to uncover more secrets of the universe, a scientist from Villanova University’s College of Liberal Arts and Sciences (CLAS) is helping continue to piece together one of space’s great mysteries.

Joey Neilsen, PhD, assistant professor of Physics, is a part of a team of astronomers unveiling the first image of the supermassive black hole at the center of our own Milky Way galaxy. The findings were announced at a press conference Thursday morning, yielding valuable clues about the workings of these massive objects believed to live at the center of most galaxies. The image was produced after years of work by a global research team called the Event Horizon Telescope (EHT) Collaboration using observations from a worldwide network of radio telescopes.

Scientists have long attempted to image the previously invisible Sagittarius A* (Sgr A*) and the image released Thursday provides the first visual evidence of the black hole’s existence. Astronomers cannot see the hole itself because of its complete darkness, but glowing gas around the center reveals a telltale sign of its presence. The EHT team’s results are being published in a special issue of The Astrophysical Journal Letters (link).

“This is the first view of the closest supermassive black hole, our black hole,” Neilsen said. “It’s one of only two black holes whose shadow can be detected, so it’s an important test of general relativity. It’s a big community effort.”

To image Sgr A*, the team created the EHT by linking together eight radio observatories across the world to create one large virtual telescope. The black hole was observed on multiple nights and data was collected over a period of consecutive hours, like using a long exposure time on a camera. Neilsen worked with colleagues in the team’s Multiwavelength Working Group to secure coordinated observations of Sagittarius A* with other facilities including NASA’s Chandra X-ray Observatory and the NuSTAR (Nuclear Spectroscopic Telescope Array) X-ray Observatory.

The latest announcement comes on the heels of the EHT Collaboration’s release of the first image of a black hole in 2019. Neilsen also played a role in observations of the more distant black hole M87*, located in the galaxy M87.

“One thing that makes this image particularly significant is that the image of Sgr A* varies much more rapidly than M87*,” he said. “But we still expect similar images according to general relativity, so it’s important that both sources are consistent with bright rings surrounding a dark region.”

The latest image is the culmination of a five-year journey. The team of more than 300 researchers from around the globe used supercomputers to combine and analyze data while comparing observations with its library of simulated black holes. Neilsen and undergraduate student Caleb Kwon, ’22 CLAS, studied X-ray “flares” with the team to help understand the rapid, energetic variability of the EHT target.

The work being done by Neilsen and the EHT Collaboration continues. A major observation campaign this spring included more telescopes than ever before. The expanding network and technology will allow scientists to take more impressive images and movies of black holes in the near future.

“We’re so excited to continue these campaigns in the future,” Neilsen said. “They give us a chance to connect the dots between Sgr A*’s most energetic flares and structure near the event horizon that is finally visible to the EHT.”