Dr. Guinan, professor of Astrophysics and Planetary Sciences at Villanova University, is a renowned leader in Astronomy and Space Science Research 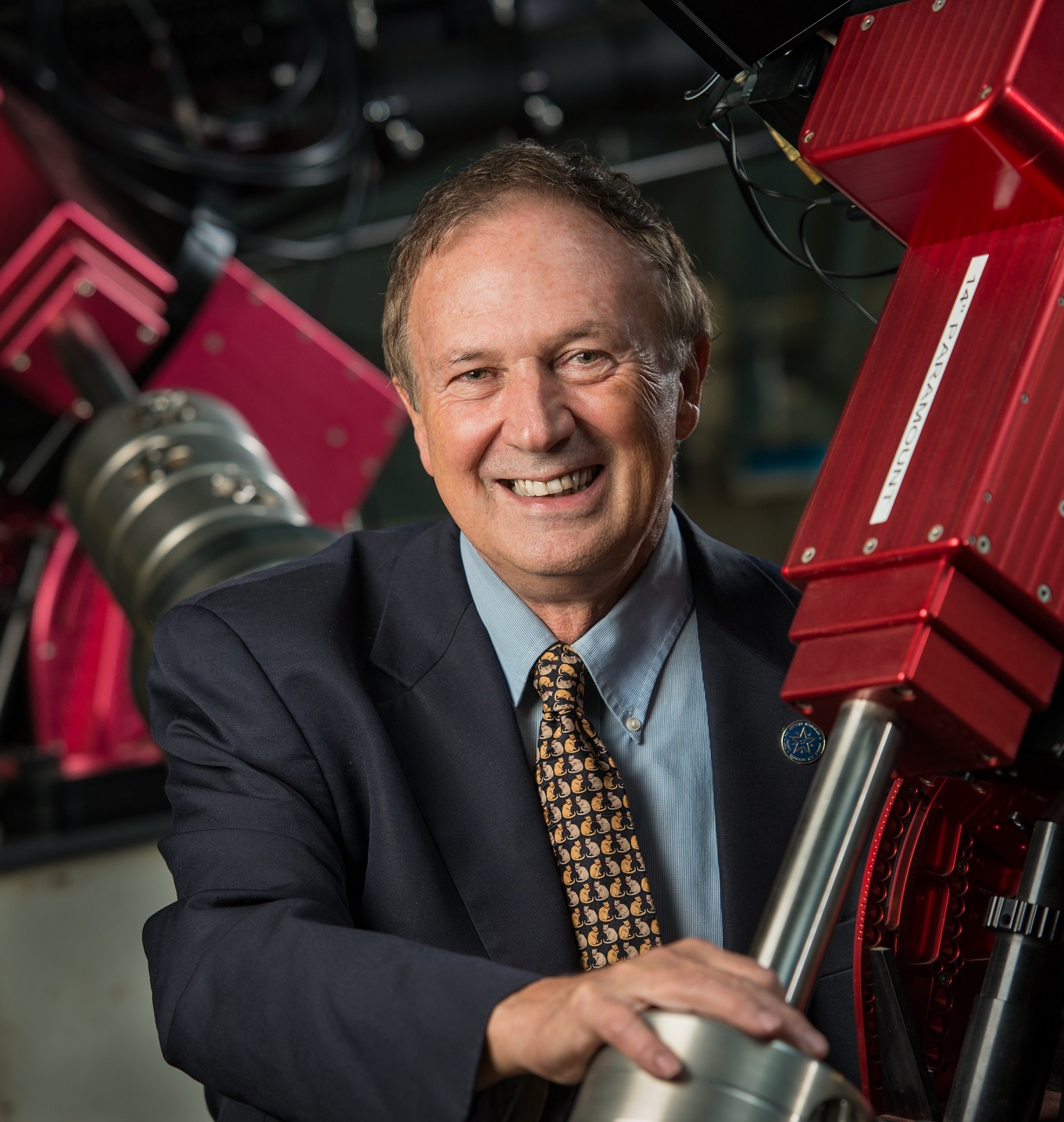 As the 50th anniversary of the Apollo 11 Moon landing approaches, another golden jubilee has also arrived—50 years of teaching and research at Villanova University for Dr. Edward Guinan, Professor of Astrophysics and Planetary Sciences.

Dr. Guinan is a pioneer in astronomy and space science research, who studies the Sun, stars, and planets inside and outside our solar system—as well as the search for potential life on these planets. His recent research efforts are primarily aimed at studying the effects that X-ray and UV radiation from host stars have on their planets and to determine if these exoplanets could be habitable. Dr. Guinan also carries out research in astrobiology on Earth to study extremophiles (life in extreme conditions) as proxies for potential life on Venus, Mars and Titan. He is a principal and guest investigator on numerous NASA astronomy, and NASA and NSF sponsored research programs.

Dr. Guinan is also active in establishing and promoting astronomy education worldwide. He is one of the founding members of the African Astronomical Society and has served as Chair of the International Astronomy Union’s (IAU) Teaching Astronomy for Development program. He currently is a member of the Steering Committee for the IAU / Norwegian Academy of Science and Letters for the International School of Young Astronomers (ISYA) and co-chair of the Task Force of the IAU Office for Astronomy for Development (OAD) for advancing education and research in developing countries.

We caught up with Dr. Guinan about his memories of the Apollo 11 mission, the impact it had on his career and what the future of space travel holds.

When and how did you first become interested in space exploration?

I first became interested in space travel when I was in grade school and listening, watching and reading science fiction shows and books. I liked the Flash Gordon movie series that were shown at kids’ matinees. I still have fond memories of Ming the Merciless from the Planet Mongo. I didn’t relate much to Flash Gordon. I related much more to the scientist character, Dr. Zarkov. I seriously became interested in the space program with the launch of Sputnik, followed by NASA’s Vanguard satellite. In high school, I became a rocket builder along with friends and formed a rocket club.

Did you watch the landing on live TV July 20, 1969? Describe your feelings in witnessing this historical event?

I would have never missed it. I was a space fanatic! I saw the launch from Hayden Planetarium in New York City, where I had a summer job. I followed the landing and moon walk from my wife’s (Ann Guinan) parents' house on Long Beach Island on Sunday, July 20. I skipped the beach to watch—actually listen—since there were no photos of the landing of the lunar module (Eagle) on Sunday afternoon. I stayed glued to the TV and several hours later watched Neil Armstrong make his first “Small Step” on the Moon’s surface, closely followed by Buzz Aldrin.

What do you recall were the most striking moments or images of the coverage?

I liked the takeoff and landing, but like everyone else, the first steps on the Moon were by far the most memorable. Even today when I arrive at a place after a long airplane trip, or even car trip, I sometimes say to my wife (to annoy her), “The Eagle has landed.”

What were the most important scientific aspects and findings from this mission?

The moon rock samples returned from Apollo 11 and later missions rewrote the history of the solar system. The chemical analysis and radioactive isotope dating of the moon rocks returned to Earth were the most important science take-aways.  Radioactive isotopic dating using U-238, Th-232 and other isotopes revealed ancient ages of the moon rocks of between 3.6-4.0 billion years. The moon rocks are nearly as old as the Earth and the rest of the solar system that are 4.57 billion years old. Since the moon doesn’t have plate technics (continental drift) like the Earth, these rock samples provide the precise times when the lunar rocks first solidified from a global magma (lava) lunar ocean. This information and chemical analysis led to the theory that the moon was formed by a violent collision of a Mars-size proto-planet with the Earth some hundreds of million years after the formation of the solar system. Fragments of the Earth’s mantle and crust were ripped away forming a ring of debris that eventually (via collisions) formed our Moon.

However, the most important technological and humanistic aspect of the Apollo 11 mission was the demonstration of space flight to another celestial body. It meant that we, as a species, were no longer bound to only the Earth. It is a pity that that the after the last flight of Apollo 17 in 1972, the lunar human missions were discontinued. However, these programs cost a lot a money and, at the time, we were not ready technologically to establish a moon base. The other important aspect of Apollo 11 was the view of our blue and white planet from the Moon, showing how precious and beautiful our Earth is: One world, home to all people.

What affect did an event like the Moon landing have on your career aspirations?

I was a PhD student at University of Pennsylvania from 1964-1970 and was studying stellar astrophysics. During 1967-68, I was in New Zealand carrying out observations of mostly eclipsing binary stars for my thesis. While there, by luck I observed the occultation of the star by the planet Neptune and found the first evidence of its segmented ring system. A lot of exciting things were going on in astrophysics with the discovery of black holes, quasars and the first evidence of the microwave cosmic background radiation during the mid-1960s. So, I was extremely happy with what I was doing, and the lunar landing just added to the excitement. I started teaching at Villanova part-time in Fall 1968 and full-time a year later—and forever since.

NASA has set a goal of landing on the lunar South Pole in 2024. Will they meet this goal?

I think that setting up a Moon base by 2024 is feasible, but unlikely. I feel 2026-27 is more likely. We have the technology for doing this now. There is strong evidence that water (ice) is present on the lunar south pole shielded from sunlight by a large crater. It would be great to tap into that natural water supply and oxygen could be made from the water for breathing. Also, the Moon, unlike Mars, is not too far away for a rescue—if needed. The Moon is approximately 230,000 miles away, while Mars is more than 100 times farther—at roughly 30 million miles away when nearest to the Earth.

Where do you think space exploration goes from here?

In terms of human-missions (from a recent Trump administration directive), it looks like a Moon-base may be next on the agenda—maybe by mid-2020s. There is water (ice) on the moon near the lunar South Pole that could make a base possibly self-sufficient. For me, the more interesting and exciting (but more expensive and riskier) human mission would be to establish a permanent base on Mars. SPACEX-Mars Mission for Human Habitation on Mars plans doing this by mid-2020s. Elon Musk talks about “making Human-kind a Multi-planet species.” I also believe in this. Because in the very unlikely event that Earth should be hit by large asteroid, comet, or a rogue planet wiping out most life on Earth, our species can survive. I think that SpaceX has an optimistic schedule. On the other hand, NASA has more conservative (realistic) plans for a Mars base by the mid-2030s.

Even though most of my research has focused on stellar astrophysics over the last 25 years, more recently this research has also focused on the effects of star’s magnetically-driven X-ray and ultraviolet radiation on hosted planets. This high energy radiation of stars like the Sun has strong effects on the potential habitability of hosted planets, since it can cause hosted planets to lose their atmospheres and water inventories—making most life impossible. Along with Villanova colleagues Scott Engle and Larry DeWarf, as well as undergraduate students, we have determined changes in stars’ X-ray and Ultraviolet radiation with a star’s age and spectral type. This data has been used in studies to estimate the habitability of planets both inside and outside the solar system. Most of these X-ray and Ultraviolet observations have been made with NASA space missions such as the International Ultraviolet Explorer (IUE), Hubble Space Telescope, and Chandra X-ray Observatory, and also using X-ray observations with the German ROSAT mission and ESA’s XMM-Newton X-ray observatory. We are looking forward to the launch of the large James Webb Space Telescope in 2021. Webb may be able to image and secure spectra of the some of the Earth-size planets orbiting in the habitable zones of nearby stars to determine the composition of their atmospheres, presence of water and biosignatures for alien life. 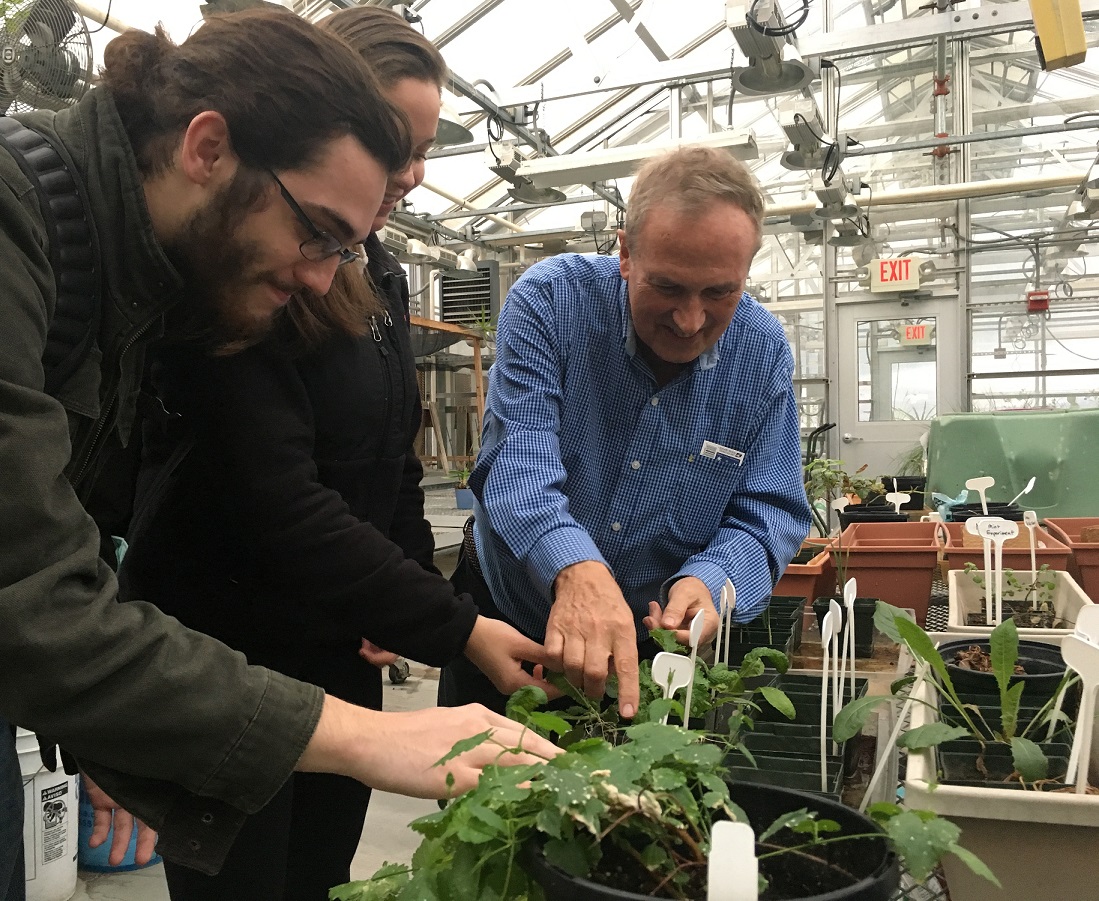 Dr. Guinan (right) talks with Astrobiology students about the growth of plants in the Mars simulant soil.

During the last two years, as part of the Villanova Mars Gardens program, we have been experimenting with growing plants and farming in greenhouses on Mars. The results indicate that most plants can grow in simulated Martian soil under the reduced ambient sunlight on Mars. This summer, astronomy major Alicia Eglin is testing growing plants both hydroponically grown, as well as in the Martian simulated soil. In these studies, in very small way, Villanova is contributing to a future Mars base, since food will have to be grown there.

In terms of space exploration, are there other missions of interest to you which focus on search for life elsewhere?

Human missions are very exciting but not cost effective because of carrying along food, water and life support as well much needed human safety support systems. The NASA missions that I am most excited by are the Europa Clipper and the Dragonfly mission to Saturn’s icy moon Titan. In my opinion Jupiter’s ice covered moon Europa may be one of the best places in the solar system to search for life. Observations of Europa indicate that the moon likely has a salty, liquid water ocean under its icy surface that could harbor alien life. The Europa Clipper mission is set to fly within the next several years. The primary goals are to determine if the ocean exists and to search for spectroscopic clues of primitive life. Likewise the Dragonfly mission will, among many things, search evidence of extremophile life in the very cold liquid hydrocarbon lakes known to exist on the Nitrogen-rich atmosphere of the moon and possibly under its icy surface. On Earth cold-loving extremophiles, called psychrophiles, are most often bacteria, fungi or algae found living at sub-freezing temperatures beneath ice sheets of Siberia and Antarctica. But it is very, very cold on Titan with temperatures near -179 C / -290 F). Who knows?  With luck the Dragonfly Mission could launch within the next decade and answer these important questions.