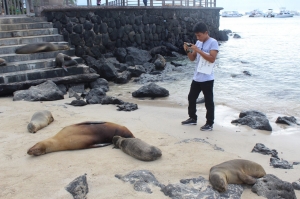 “In Philadelphia, you've got squirrels. In Galapagos, you have sea lions,” said Deena Weisberg, PhD, assistant professor of Psychological and Brain Sciences. Her recent research efforts include the study of Galapagos sea lions and their reactivity to human disturbance on beaches. The study is forthcoming in the journal, Wildlife Biology.

If you frequent popular beaches, you are familiar with the high amount of activity and commotion that occurs. In the Galapagos, these popular beach destinations are shared by sea lions, Weisberg and her team of researchers see this as a potential stressor to sea lions, one that could have negative effects on their wellbeing.

In this study, sea lion behavior was observed over two, seven-month time spans. “In the observational period you're looking at gender, age, and how closely the sea lions are grouped. You’re watching who is calling to whom, or who is nursing their young, or other behaviors that they're engaged in,” said Weisberg.

Weisberg co-led this project as a collaborative effort between faculty from other universities and the local Galapagos community. To collect the observations on the sea lions, the US-based researchers relied on International Baccalaureate students at the UAE-San Cristóbal School. These students participated in a community science effort called Project LAVA (Laboratorio Para Apreciar La Vide y El Ambiente), an initiative led by the Galápagos Education and Research Alliance, which is co-directed by Weisberg. 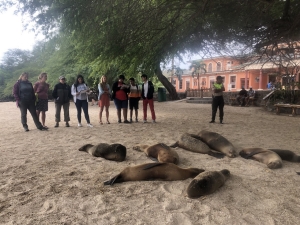 “One of the reasons Project LAVA is so exciting and innovative is that it involves members of the local community at every stage of the research: coming up with the idea for the project, implementing the research and reporting the results back to their community,” said Weisberg. “It's especially exciting because all of the data for this journal article was collected by the high school students, under the auspices of this project. They really became the experts on these sea lions over the course of their observations, and we're hoping that they'll continue to advocate for better ways for members of their community to productively co-exist with this species.”

The sea lions’ reactions to the presence of humans were also recorded. “There is an approach where you walk slowly toward a sea lion that you’ve identified from 10 meters away, until you get up to two meters, which is the limit of approach. And you want to see, how do they react? Do they come towards you? Do they move away from you?” added Weisberg.

Another question the team asked was how reactivity could differ between beaches of various levels of popularity for humans.

“Different beaches have different levels of human disturbance. There is one beach that is in the center of town. It is very popular, and people are there all the time, having picnics, with their dogs or surfing,” said Weisberg. Sea lions on more popular beaches like this one demonstrated less reactivity to human disturbance.

Although sea lions reacted less on more human-populated beaches, sea lions still showed signs of aggressive behavior throughout the beaches that were studied. These results provide a reason to believe human interaction and disturbance of sea lions should be reduced, as further close contact could cause additional stress to the sea lions.

They’re also a species whose wellbeing should be prioritized. “Galapagos sea lions are in danger. They're endangered and endemic. They’re only found in Galapagos islands, so this is a species of concern globally,” Weisberg said.