Center for Peace and Justice Education

The Adela Dwyer | St. Thomas of Villanova Peace Award recognizes an individual or group for outstanding contributions to the understanding of the meaning and conditions of justice and peace in human communities. 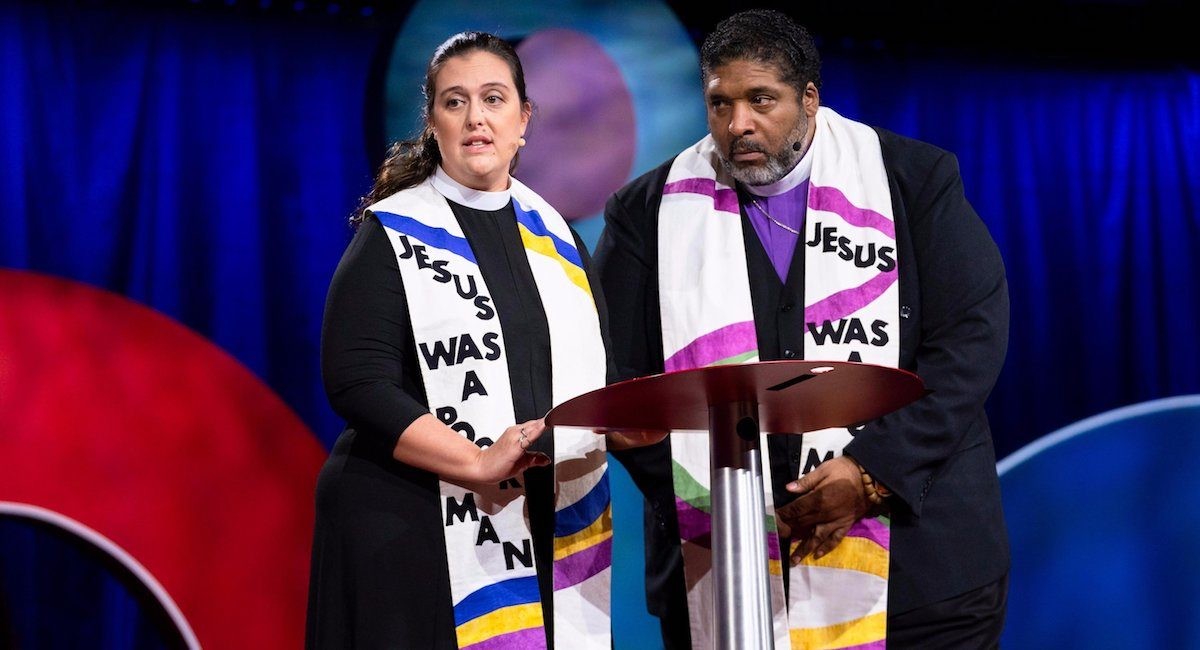 The Poor People’s Campaign: A National Call for Moral Revival has picked up the unfinished work of the civil rights movement begun in 1968. People are coming together to confront the interlocking evils of systemic racism, poverty, ecological devastation, militarism and the war economy, and the distorted moral narrative of religious nationalism.

Rev. Dr. Liz Theoharis accepted the award during an online ceremony and delivered moving remarks about the organization's important work. Rev. Naomi Washington-Leapheart moderated--and sang us out at the end! It was an inspiring evening.

Please click the link below to view the video presentation.

2020: Las Patronas This incredible group has been operating in the state of Veracruz, Mexico, for twenty-five years, feeding Central American migrants in transit, escaping conflict or in hope of building a better future. The work of Las Patronas embodies a generosity of heart and selflessness of spirit that speaks directly to the mission of our University and, most especially, to the concerns of our Peace Award. Because Las Patronas was not able to travel to us, we present a video celebration of the award. Video Celebration

2019: Fr. Gregory Boyle, SJ. Fr. Boyle is the founder of Homeboy Industries in Los Angeles, Calif., the largest gang intervention, rehabilitation, and re-entry program in the world. A Jesuit priest, from 1986 to 1992 Father Boyle served as pastor of Dolores Mission Church, then the poorest Catholic parish in Los Angeles that also had the highest concentration of gang activity in the city. In 1988, he and his parish started what would eventually become Homeboy Industries, which employs and trains former gang members in a range of social enterprises, as well as provides critical services to thousands of men and women who walk through its doors every year seeking a better life.  Watch the award presentation.

2018: Bryan Stevenson. Mr. Stevenson founder/executive director of the Equal Justice Initiative, and a clinical professor at New York University School of Law. Stevenson has challenged bias against the poor and minorities in the criminal justice system, especially children. He has helped achieve United States Supreme Court decisions that prohibit sentencing children under 18 to death or to life imprisonment without parole. Stevenson has assisted in cases that have saved dozens of prisoners from the death penalty, advocated for poor people, and developed community-based reform litigation aimed at improving the administration of criminal justice. He spoke on his book, Just Mercy, the 2018 One Book for Villanova. Bryan Stevenson has advocated tirelessly on behalf of the marginalized and condemned and who continues to challenge the legacy of racial inequality in America.

2017: Susan Burton. Ms Burton's topic, "From Prison to Recovery to Leading the Fight for Incarcerated Women" drew on her personal experiences of nearly two decades in the criminal justice system, Ms. Burton founded A New Way of Life Re-Entry Project (ANWOL) in 1998, dedicating her life to helping others break the cycle of incarceration. ANWOL provides resources including housing, employment, legal services, and community organizing on behalf of, and with, people who struggle to rebuild their lives after incarceration. Ms. Burton is also a co-founder of All of Us or None (AOUON) and the Formerly Incarcerated and Convicted People’s Movement (FICPM), both national grassroots civil rights movements comprised of formerly incarcerated individuals, their families, and community allies. Susan Burton recipient of  the 2017 Peace award presentation is available online

2015: General Romeo Dallaire. General Dallaire commanded the United Nations peacekeeping mission in Rwanda prior to and during the 1994 genocide.  His courage and leadership during this ill-fated mission have earned him recognition, affection, and admiration from around the globe. In recent years he has turned his attention to the use of child soldiers. General Dallaire will receive the 2015 Adela Dwyer-St. Thomas of Villanova Peace Award for his work to raise awareness about and eradicate the use of children as weapons of war.

2014: Covenant House. Kevin Ryan joined the Covenant House and provided civil legal aid to homeless, abused and trafficked youth in New York City. He helped teenagers at Covenant House in the Bronx, Brooklyn, Manhattan, Atlantic City and Newark, New Jersey, before being named New Jersey’s first public Child Advocate in 2003. Kevin exposed conditions of illegal overcrowding in many of the State’s juvenile detention centers and the plight of children languishing in the State’s then-floundering foster care system. Kevin Ryan currently leads the Covenant House International, one of the largest charities in the Americas devoted to serving homeless and trafficked children and youth, which reaches more than 50,000 trafficked and exploited children and youth. For more information about Covenant House.

2013: Network. Is a national Catholic social justice lobby that has been advocating for peace and justice in Washington for over 40 years.  NETWORK’s recent “Nuns on the Bus” campaign has famously spoken out on the federal budget and immigration reform. The award will be accepted by Executive Director, Sr. Simone Campbell SSS, a noted speaker on public policy issues

2012: Wendell Berry. Wendell Berry is a poet, author, cultural critic,  conservationist and farmer.Often referred to as a “21-st century Henry David Thoreau,” he has used pen and hand to teach us about ourresponsibilities for the land and for one another.

2011: Leymah Gbowee, helped organize and then lead the Liberian Mass Action for Peace, a coalition of Christian and Muslim women who sat in public protest, confronting Liberia’s ruthless president and rebel warlords. Gbowee emerged as an international leader who changed history, marking the vanguard of a new wave of women taking control of their political destiny around the world.

2010: The Coalition of Immokalee Workers. The CIW is a community-based organization that strives to build the strength of the community on a basis of reflection and analysis, constant attention to coalition-building across ethnic divisions, and an ongoing investment in leadership development to help their members continually develop their skills in community education and organization.

2009: Judy Wicks, Founder and President of White Dog Community Enterprises. Ms. Wicks is committed to building a local food economy in the Philadelphia region. She is also Chair and Co-founder of the nationwide Business Alliance for Local Living Economies.

2007-08:  On behalf of The Philadelphia Mural Arts Program, Jane Golden, director of the Program accepts the award. Since 1984 she has supervised the completion of 2000 indoor and outdoor murals. Jane’s accomplishments have been recognized both locally and nationally. While coordinating the city-wide mural art program, Jane remains committed to art education. She is an instructor at the Pennsylvania Academy of Fine Art and teaches at the University of Pennsylvania.

2006: Jonathan Kozol. A non-fiction writer, educator and activist, best known for his books on public education in the United States. He has become deeply involved in social justice work and is a critic of the voucher movement.

2005: Michael Berg. A local peace activist for forty years who stood opposed to Operation Iraqi Freedom, Berg, with his family, were thrust into the national and international spotlight when his son, Nick Berg, was brutally murdered in Iraq in May, 2004.

2004: Archbishop Desmond Tutu. In 1984, Tutu's contribution to the cause of racial justice in South Africa was recognized when he received the highest award the world can offer - the Nobel Peace Prize.

2003: Voices in the Wilderness. Founded in 1996 to campaign for an end to economic and military warfare against the Iraqi people, talk by co-founder Kathy Kelly.

2002: Noam Chomsky. Professor emeritus of linguistics at MIT and one of America's most prominent political dissidents, a strong advocate for peace and justice.

2001: Congressman John Lewis. US Congress Representative from Georgia, one of the key figures in the Civil Rights Movement who has been in the vanguard of progressive social movements and the human rights struggles of the United States for over 40 years.

2000: Daniel J. Berrigan, S.J. A celebrated Jesuit poet, anti-war activist and radical advocate of human rights for more than half a century.

1999: Project H.O.M.E. Founded in 1988, Project H.O.M.E. has been a leader in providing comprehensive and effective services to persons who experience chronic homelessness in Philadelphia and in responding to the root causes of homelessness through low cost housing and political advocacy, talk by cofounder Mary Scullion, R.S.M.

1997: The Catholic Worker Movement, House of Grace. Talk by Mary Beth Appel. The Catholic Worker Movement is a collection of autonomous communities of Catholics and their associates founded by Dorothy Day and Peter Maurin in the United States in 1933. Its aim is to "live in accordance with the justice and charity of Jesus Christ." One of its guiding principles is hospitality towards those on the margin of society, based on the principles of communitarianism and personalism. To this end, the movement claims over 240 local Catholic Worker communities providing social services. Each house has a different mission, going about the work of social justice in its own way, suited to its local region.

1996: Sr. Helen Prejean, C.S.J. Passionate advocate for abolition of capital punishment and the author of Dead Man Walking, made into a 1995 film starring Susan Sarandon.

1995: Jim Wallis. Author, preacher, activist and editor of Sojourners, a magazine reporting and analyzing the intersection of faith, politics, and culture, making a direct link between strong biblical faith and active social engagement, theology and action, spirituality and politics.

1994: Rev. John P. McNamee. Author of Diary of a City Priest, pastor of St. Malachy Church in Philadelphia, inspired by the Rev. Daniel Berrigan, S.J., wrote several books of poetry and prose championing the rights of poor persons, including Diary of a City Priest, which was made into an inspiring film for public television (2001) available on DVD & VHS.

1991: Habitat for Humanity. A nonprofit, nondenominational Christian housing organization working to build simple, decent, affordable, houses in partnership with those in need of adequate shelter, talk by founder and president Millard Fuller.

1990: John Sobrino, S.J. Author, advocate for the poor and oppressed.