Andrew Ahr ’18 CLAS and Austin Rios ’18 CLAS, Computer Science majors in Villanova University’s College of Liberal Arts and Sciences, wanted to come up with a senior project that would benefit others. The result is IXAM, a mobile application that allows users to test their vision against the 20/20 benchmark right on their iPhone or Android and find out what kind of prescription they might need.

“So many people never go to an eye doctor and think their eyesight is normal,” Andrew says. “This app allows them to self-administer a traditional eye test to see if they might be starting to have a vision problem and need to see a professional.”

The idea for the app was also inspired by a friend of Andrew’s family who was a missionary in Africa. With IXAM, doctors working in rural areas can administer eye exams quickly to large numbers of people who otherwise may not have access to eye care.

In Dr. Klassner’s courses, the students learned to develop an initial framework for the app, and he encouraged the them to further develop the project. As they moved further along with it, Dr. Kim connected Andrew and Austin with an ophthalmologist, who helped them understand the medical side and what features the app would need in order to be truly effective. 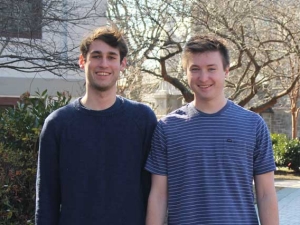 Austin Rios ’18 CLAS, left, and Andrew Ahr ’18 CLAS created IXAM, a mobile application that allows users to test their vision against the 20/20 benchmark right on their iPhone or Android

“This type of application can be used as a preliminary screening process before seeing an ophthalmologist, or as an accessible tool to those who may not have access to eye care,” Dr. Kim says.

A Diversity and Inclusion class taught by Jason Javier-Watson EdD of the Department of Education and Counseling gave Andrew background in the importance of philanthropy and a global worldview. That class was also key to developing the app.

Andrew and Austin did a beta test of IXAM in December 2017. They implemented it on a few cell phones and recruited users to test  and critique it. Based on some of that feedback, the two senior students plan to add voice recognition, among other features. The students would like to release the app into the market by summer 2018, according to Andrew.

Both Andrew and Austin plan to pursue careers in mobile programming. “I want to create things that the user sees, that people interact with,” Andrew says.

IXAM is seen as a disruptive technology—an innovation that creates a new market and value network that eventually disrupts an existing one.

“Technology that brings healthcare to the masses has great potential to improve the wellbeing of society,” Dr. Kim says. “I am hopeful that with further development and testing, Andrew and Austin’s IXAM can be that further disruptive technology for eye care.”