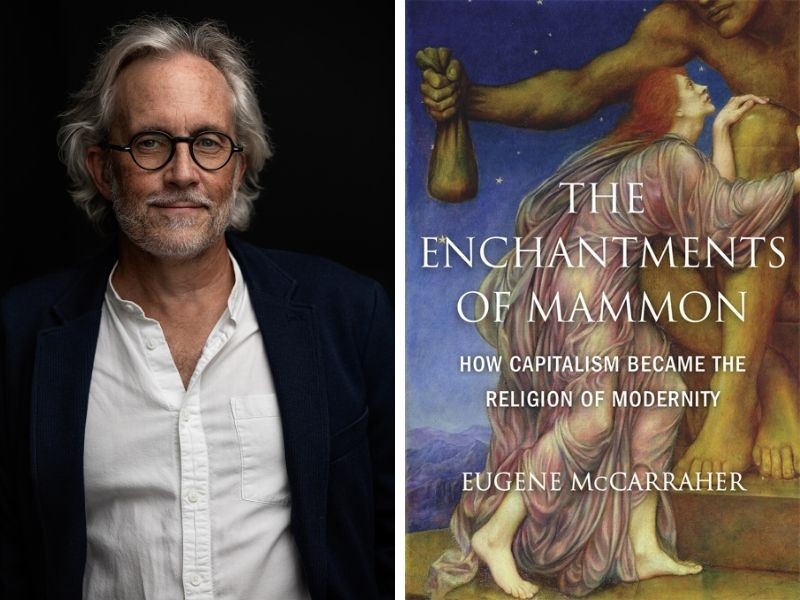 VILLANOVA, Pa. – A new book by a Villanova University historian challenges the conventional view that capitalism rejects the awe-inspiring divine for the economics of supply and demand, arguing instead that it has become a religion—with money as its deity.

In The Enchantments of Mammon: How Capitalism Became the Religion of Modernity (Belknap Press of Harvard University Press, 2019), historian Eugene McCarraher, PhD, associate professor of humanities in Villanova’s College of Liberal Arts and Sciences, reveals how mammon ensnared us—and how we can find a more humane, sacramental way of being in the world.

“One way to read modern history is as a story of capitalist enchantment and a theology of money,” Dr. McCarraher says. “That history is the subject of my book.”

In The Enchantments of Mammon, he argues that the new world created by capitalism is characterized not by disenchantment but by a “migration of the holy” to the realm of production and consumption, profit and price, and trade and economic tribulation.

“This is truly a game-changer—the history of capitalism will never look the same again,” said reviewer Jackson Lears, author of Rebirth of a Nation, calling it “a beautiful, stirring achievement.”

“One of the most impressive books I’ve ever read… a must-read for anyone serious about the mesmerizing power of capitalism,” noted reviewer Mark Dunbar of The Humanist.

“The Enchantments of Mammon is a landmark in American cultural and intellectual history, synthesizing vast swathes of writing and experience into a singular vision,” wrote James G. Chappell in the Boston Review.

The Enchantments of Mammon looks not to Marx and progressivism but to 19th-century Romantics for salvation. Dr. McCarraher makes the case that capitalism has hijacked and redirected our intrinsic longing for divinity—and urges us to break its hold on our souls.

Dr. McCarraher specializes in American cultural, intellectual and economic history, as well as theology, anthropology, economics and business culture. His work on The Enchancements of Mammon was supported by fellowships from the National Endowment for the Humanities and the American Council of Learned Societies.  He is the author of Christian Critics: Religion and the Impasse in Modern American Social Thought (Cornell University Press, 2000). He has written for Dissent and The Nation and contributes regularly to Commonweal, The Hedgehog Review, and Raritan. He received his doctorate from Rutgers University.