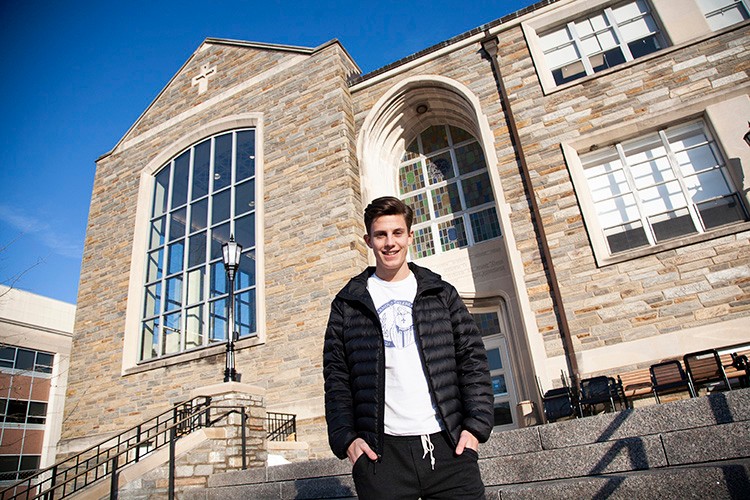 Trekking in Nepal while juggling five college courses is not your typical study abroad experience. But with his interest in Asian religions and schools of thought and practices, it was exactly what Philosophy major Jack Swick ’20 CLAS had in mind.

His faculty mentors—Sally Scholz, PhD, professor and chair of Philosophy, and James Wetzel, PhD, professor of Philosophy and the Augustinian Chair in the Thought of St. Augustine, were supportive of his trip, which included coursework in the subjects he wanted to study as well as a fascinating research opportunity.

While in Nepal, Jack conducted an on-site research project, “The Profane and the Sacrosanct: Buddhist Lay and Monastic Conceptions of Money.” He interviewed Tibetan Buddhists and explored the role of money in Tibetan Buddhism, including the themes of economic ethics and the economic role as the monastery as an institution.

In addition to his research project and classes—which included Politics of Tibetan and Himalayan Borders, Religious Change in Tibet and the Himalayas, and Beginning Tibetan Language, Jack was able to pursue his interests in Buddhism, Hinduism, yoga and meditation in a country he had long wanted to visit.

“I had seen stunning photos of the Himalayas and the diverse biomes in Nepal, and I wanted to see them for myself. The real thing was as beautiful as I had anticipated.”

Along with his Philosophy major, Jack is pursuing a concentration in Cognitive Behavioral Science and minors in Psychology and Classical Studies. After graduation, Jack plans to pursue a joint PhD in Philosophy and one of the brain and psychological sciences.

“My Philosophy major has developed my writing, reading, rhetorical and analytical skills, which are necessary not only for studying philosophy but I think for any kind of intellectual work.”