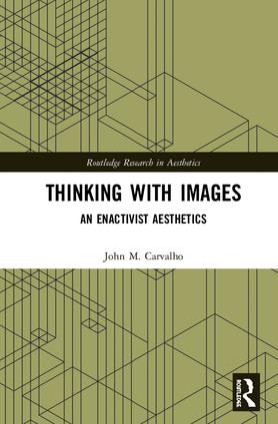 Art is sometimes thought of as an indulgence of the senses. In his recent book, Thinking with Images: An Enactivist Aesthetics (Routledge, 2018), John Carvalho, PhD, professor of Philosophy, is less interested in Art and more interested in artworks, specific paintings, photographs, films and artifacts. He does not sensibly indulge these artifacts; rather, he thoughtfully engages them in an effort to draw out what they are thinking and what they ask the viewer to think. He argues that this practice can impact the way one thinks about the world in general.

"What does it mean to think with images?” asks reviewer Deborah Knight, associate professor of Philosophy at Queen’s University. “For Carvalho, it means freeing ourselves from the constraints of aesthetic theories and instead really engaging with works of art as particular objects. Starting with works by Bacon, Michals, Duchamp and Godard, Carvalho shows us how to discover the questions these works set for us but do not directly answer, questions we didn’t previously realize we should care about. Engagingly written, this book will change the way you think about art."

This book is written for scholars working in the philosophy of art and philosophical aesthetics, art historians, and researchers concerned with the meanings of contemporary artwork and how we engage with these artworks.

“I want readers of my book to be encouraged to thoughtfully engage with artworks and to share what they think with these artworks especially when they don’t know what to think,” Dr. Carvalho explains. “I am not interested in art in general, but in what about a particular artwork makes us think.”

Dr. Carvalho teaches in Villanova’s doctorate program in Philosophy as well as undergraduate courses in the department. His research focuses on ancient philosophy, Contemporary Critical Theory, 20th and 21st century French philosophy and aesthetics. He has published numerous essays on aesthetics including “Annunciations: Figuring the Feminine in Renaissance Painting” and “A Strange Fruit: Music Between Violence and Death.”