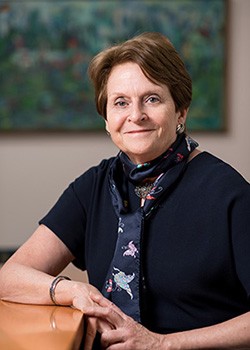 Villanova, PA—Adele Lindenmeyr, PhD, Dean, Villanova University College of Liberal Arts and Sciences, will be a panelist at the 50th annual Association for Slavic, East European and Eurasian Studies Convention, an international forum that attracts scholars from around the world. The event will take place Dec. 6 - 9 in Boston, Massachusetts.

Established in 1948, ASEEES is the leading international organization dedicated to the advancement of knowledge about Central Asia, the Caucasus, Russia and Eastern Europe in regional and global contexts. The convention provides the opportunity for more than 2,600 scholars, professionals and graduate students from around the globe to exchange new research and information.

Sometimes called “Russia’s Jane Addams,” Panina was the first woman in history to hold a cabinet position and was one of the most remarkable women of the generation that made the Russian Revolution.

An internationally-recognized expert in modern Russian history and culture, Dean Lindenmeyr has researched the history of charity and social welfare in Russia, tracing its evolution from a civil society with privately funded, organized relief for the poor to an autocratic state like Imperial Russia, to today’s new Russia, a reconstructed civil society underpinned by a network of private charities and organizations.

Dean Lindenmeyr also is a professor of history at Villanova and has received numerous fellowships and awards. Her book Poverty Is Not A Vice: Charity, Society, and the State in Imperial Russia (Princeton University Press, 1996), won the Heldt Prize for Best Book Published by a Woman in Slavic Studies from the Association for Women in Slavic Studies. The same organization also honored her in 2003 with its Outstanding Achievement Award.

She has also received a research fellowship from the National Endowment for the Humanities and her research has been published in American, European and Russian scholarly outlets. She is a frequent presenter at national and international conferences, recently served as a co-editor of an international collaborative project devoted to publishing the latest scholarship on the Eastern Front in World War I and the 1917 Russian Revolution.