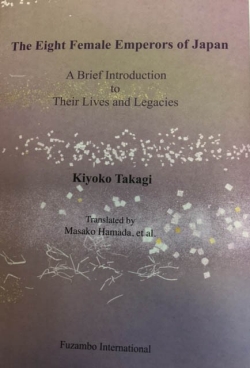 Princess Aiko is the only child of Crown Prince Naruhito and Crown Princess Masako of Japan. However, according to current Imperial Household Law she may not succeed her father on the Chrysanthemum Throne because she is a woman. While Japan grapples with the future of imperial succession, a new English translation of an important text explores a time in Japanese history unfamiliar to many Westerners: Japan had six female emperors, two of whom reigned twice, who ruled before the 9th century and for a time in 16th and 17th centuries.

Masako Hamada, EdD, director of the Asian Studies program in Villanova University’s College of Liberal Arts and Sciences, provides a history of those women in the translated book, The Eight Female Emperors of Japan: A Brief Introduction to Their Lives and Legacies (Fuzambo International, 2018). Over the course of four years, Dr. Hamada translated the text originally written by Kiyoko Takagi, into English, expanding access to this important piece of Japanese history.

“If a woman becomes emperor in Japan in the future, the histories of these eight female emperors will be a critical guide to understanding Japan’s imperial legacy,” Dr. Hamada said.

Dr. Hamada says the resurfacing conversation about female emperors raises a more general question about gender equality in Japan. As part of this timely discussion, the Asian Studies program—in collaboration with the Gender and Women’s Studies and Cultural Studies programs—hosts “Women’s Leadership in Japan: Past and Present” on Wednesday, Sept. 19 from 3 to 4 p.m. in room 31, Garey Hall featuring:

Following the lecture is a reception and a book signing with Dr. Hamada. The event is free and open to the public.