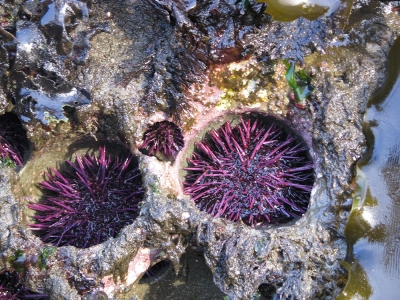 VILLANOVA, Pa. – A team of Villanova University biologists researching sea urchin bioerosion on rocky temperate reefs have settled the centuries-old question of whether the prolific spiny echinoderms sculpted the pits into which they fit snugly, along with quantifying the speed and consequences their activity poses to nearshore systems.

Detailed in an article titled, “Bioerosion by pit-forming, temperate-reef sea urchins: history, rates, and broader implications,” published Feb. 21 in PLOS ONE, the study provides the first data-driven results demonstrating that sea urchins do, indeed, drill cavities in the reefs to which they attach—and at a rapid rate that produces thousands of tons of sediment each year.

“We were not surprised that sea urchins excavate rock. What shocked us was how fast they were able to form pits, particularly in sandstone,” says Michael P. Russell, PhD, a professor of Biology in the College of Liberal Arts and Sciences at Villanova University, who led the year-long research study. “It turns out that the rate of bioerosion on sandstone is so great that across their geographic range, sea urchin excavations probably produce as much sediment as a typical river delivers to the coast.”

The purple sea urchins, collected from locations north and south of the Golden Gate area of San Francisco, California, rasp their teeth across the rock’s surface, not only abrading it, but ingesting and defecating it as sediment or sand, Russell explained. The researchers observed bioerosion on three types of rock: granite, mudstone and sandstone.

Sea otters, which inhabit the Northeast Pacific, help to maintain a balance in these nearshore temperate systems by feasting on the urchins. Otters limit urchin populations and prevent them from overgrazing kelp beds that are vital to many other marine organisms. Left unchecked, the sea urchins decimate kelp beds creating “urchin barrens” and disrupting the marine habitat. By limiting sea urchin populations, sea otters also indirectly control the level of urchin bioerosion in these systems.

To conduct the study, Russell and his students built a 1,000-liter recirculating seawater system in his Villanova lab where the California samples of urchins were studied in two experiments. The research team included Villanova Post-Doc Victoria K. Gibbs and several undergraduate students. Emily Duwan, an undergraduate in the lab, contributed to the publication with data from her senior thesis. Russell and his colleagues are preparing to conduct follow-up experiments.

The Villanova research was funded by grants from Villanova University, the National Science Foundation and the United States Department of Agriculture.