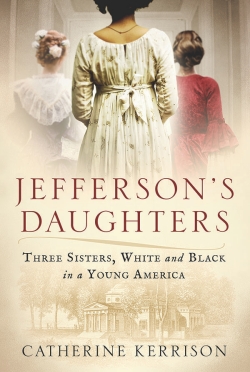 VILLANOVA, Pa. – Issues of race and gender have plagued generations of Americans and remain prevalent in our society today. Villanova University history professor Catherine Kerrison, PhD, revisits the late 18th and early 19th centuries in her upcoming book, Jefferson’s Daughters: Three Sisters, White and Black, in a Young America, which unfolds the stories of Thomas Jefferson’s daughters and the vastly different experiences they faced in life.

“It’s important to look at this period to better understand why things are the way they are today for different groups of people,” said Dr. Kerrison. “These three women lived fascinating lives. In this book, I wanted to share their stories and experiences from 200 years ago to encourage conversations about what we’re still experiencing today.”

Dr. Kerrison’s book tells the stories of Martha and Maria Jefferson and Harriet Hemings. Martha and Maria were the daughters of Jefferson's marriage, and grew up in both Virginia and Paris, where their father was posted as America’s ambassador to France. Harriet was Jefferson’s daughter from a longstanding relationship he maintained with his slave Sally Hemings. Martha, who had 11 surviving children, wrote letters that show a devotion to shaping Jefferson's legacy. Maria had remained in Virginia with relatives until her father called her to join him in Paris. She would later marry her cousin and lived happily with him until four successive pregnancies cut her life short at the age of 25.

Harriet Hemings’ story is both fascinating anda mysterious. She was born into slavery. But, at age 21, Harriet boarded a stagecoach bound for Washington, D.C. Jefferson had given her $50 for her travel expenses. Thereafter, passing as a freeborn white person, Harriet disappeared from the historical record.

“The American Revolution was a pivotal and defining experience in our history, and so it is important to examine its impact on issues of race and gender,” said Dr. Kerrison. “I hope my book will show, both in the past and today, how the powerful have cultivated and manipulated our fears of one another to retain their power, by pitting constituencies against one another rather than uniting us in a pursuit of the common good. I also hope that my book exposes the utter artificiality of these systems that separate us, so that we can begin a collective effort to dismantle them and embrace our common humanity.”

Jefferson’s Daughters is set to be released January 30, 2018 and is published by Ballantine Books, an imprint of Random House.

"The most poignant literature gives a voice to the voiceless. And in Jefferson’s Daughters: Three Sisters, White and Black, in a Young America, Catherine Kerrison, tells us the stories of three of Thomas Jefferson’s children, who, due to their gender or race, lived lives whose most intimate details are lost to time."

"The book’s most innovative chapters attempt to reconstruct, from scattered fragments, Harriet’s life in slavery and freedom."

"An insightful contribution to women’s history."

“‘'Jefferson’s Daughters,’ both white and black, get spotlight in new book,” USA Today

"How did we lose a president's daughter," Catherine Kerrison, The Washington Post

Learn more about Dr. Kerrison's research and process for writing the book.