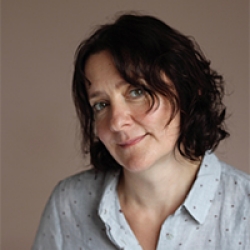 VILLANOVA, Pa. – Villanova University has selected acclaimed Irish poet Colette Bryce as the 2018 Charles A. Heimbold Jr. Chair of Irish Studies in its College of Liberal Arts and Sciences. The visiting writer-in-residence program offers Irish Studies students the enriching experience of a close classroom experience with one of Ireland’s finest contemporary poets.

Bryce has published four poetry collections including The Full Indian Rope Trick (Picador, 2004); Self-Portrait in the Dark (2008); and The Whole & Rain-domed Universe (2014), which was awarded a special Ewart-Biggs Award in memory of Seamus Heaney. She received the Cholmondeley Award for poetry in 2010.

Selected Poems (2017), which draws on all of Bryce’s books, recently received a Poetry Book Society Special Commendation. In reviewing the collection, The Irish Times noted: “Selected Poems shows that hers is a singular, original body of work.”

“I see poetry as a faithful kind of art, and I think faith in love, the idea of love as a solution, can be the thing that guides us,” she says.

Villanova’s Center for Irish Studies provides collaborative, interdisciplinary courses open to all Villanova University students to study Ireland and its diaspora. Home to of one of the nation’s oldest and largest undergraduate curriculums of its kind, the Center also offers an exchange program with the Abbey Theatre, the National Theatre of Ireland. The Center for Irish Studies has been made possible by a generous gift from the Connelly Foundation.