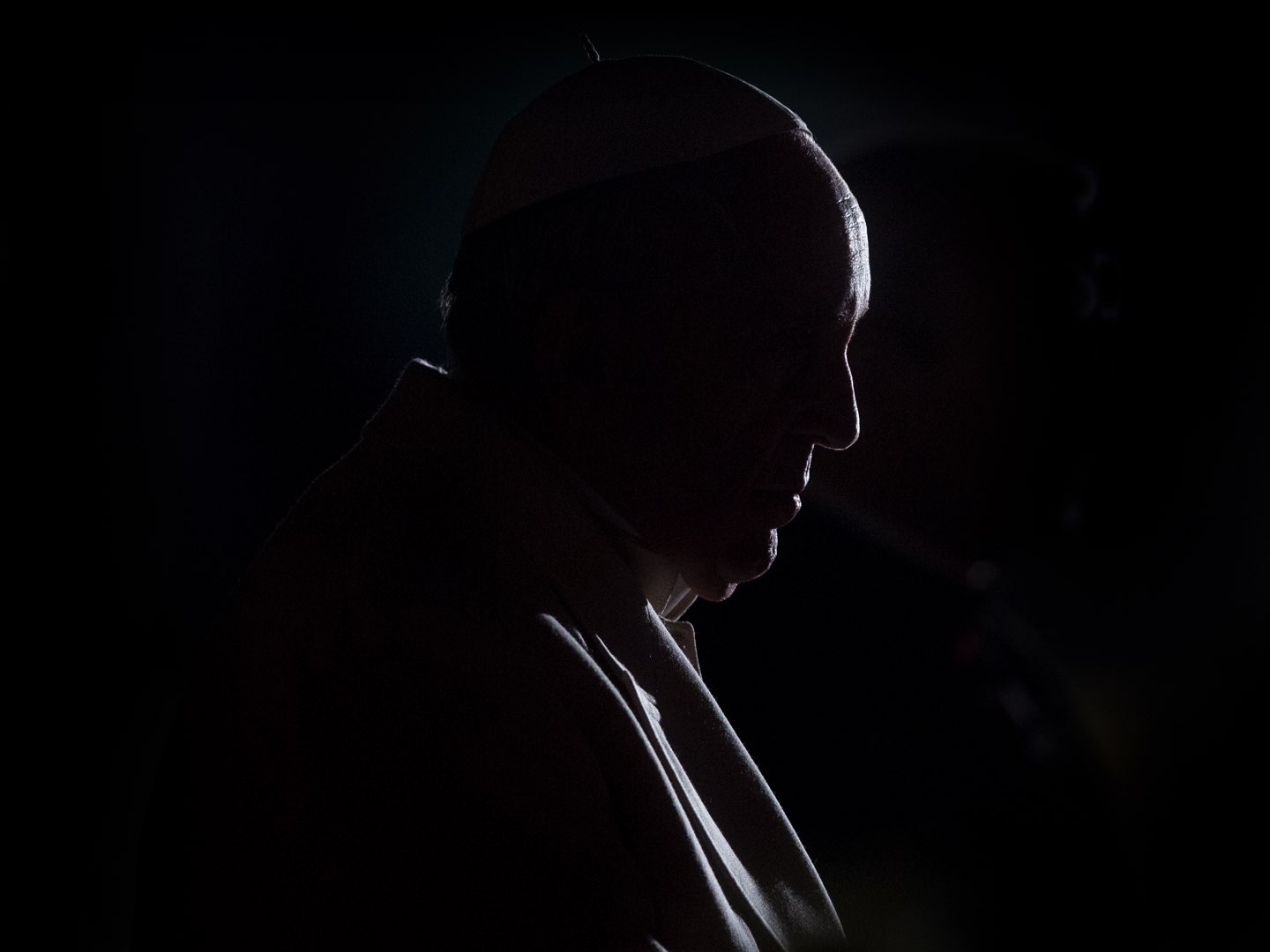 Ever since Jorge Mario Bergoglio was introduced to the world as Pope Francis in March 2013, the 266th pontiff has been busy identifying priorities, tending his global flock and exercising his role as a head of state. Through his writings, audiences, speeches, travels and tweets, the former archbishop of Buenos Aires has had a powerful, if complicated, effect as a spiritual leader and communicator.

That effect has a lot of people talking. Many laud Francis’ simplicity and concern for the poor, but some also challenge his ideas on change and reform within the Church. Debates swirl across dinner tables, church aisles and social media platforms as people from all walks of life try to better understand this pope.

Using the occasion of both the five-year anniversary of the papal election and the 50th anniversary of the closing of the Second Vatican Council, Villanova invited some of the world’s most prominent experts to campus for an unprecedented theological and historical analysis of Francis’ papacy. “Dr. Massimo Faggioli and I wanted to provide a forum to examine the pontificate of Pope Francis and its relationship to the unfinished work of Vatican II,” says Barbara Wall, PhD, vice president for Mission and Ministry, which organized the conference. 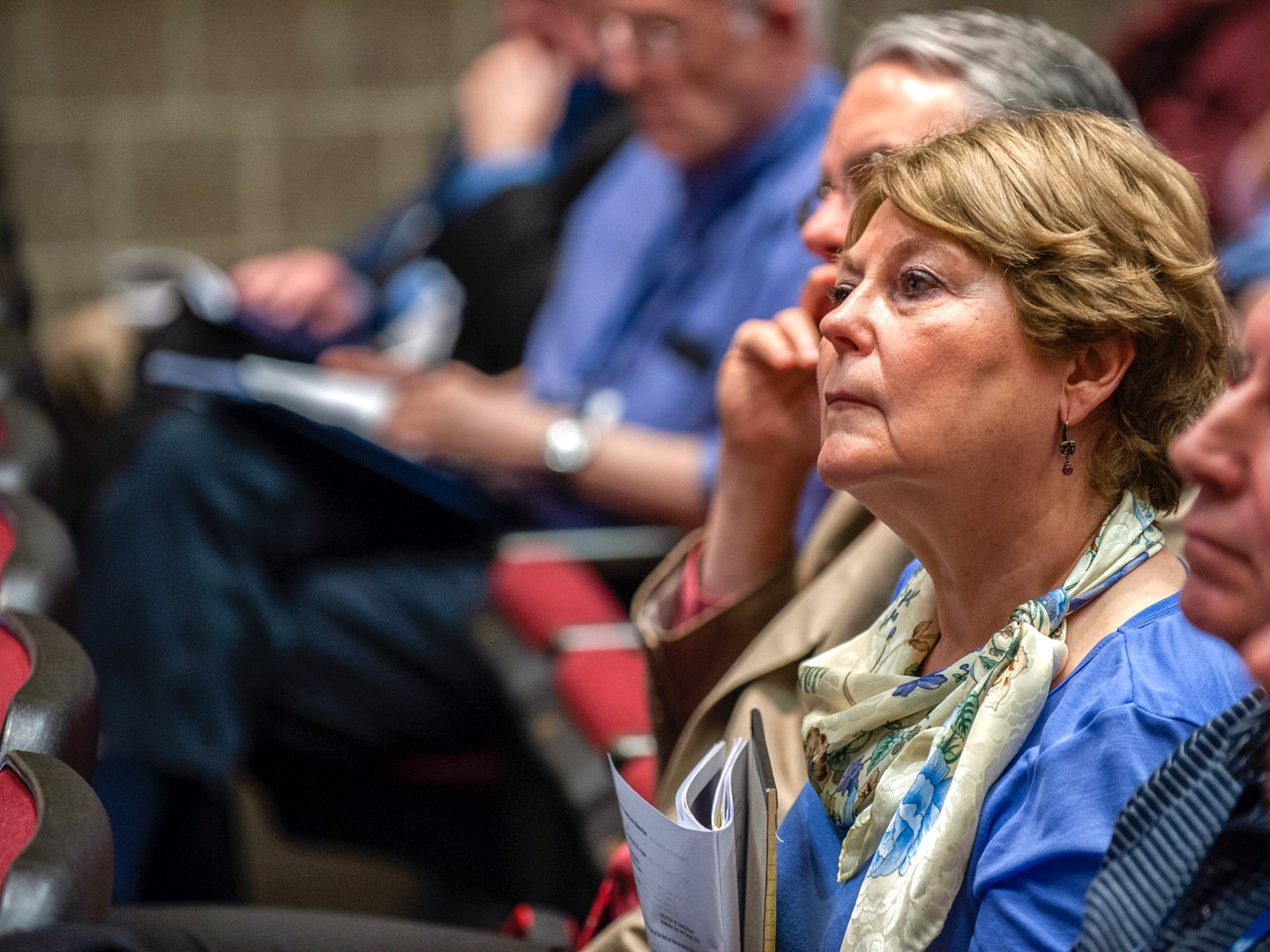 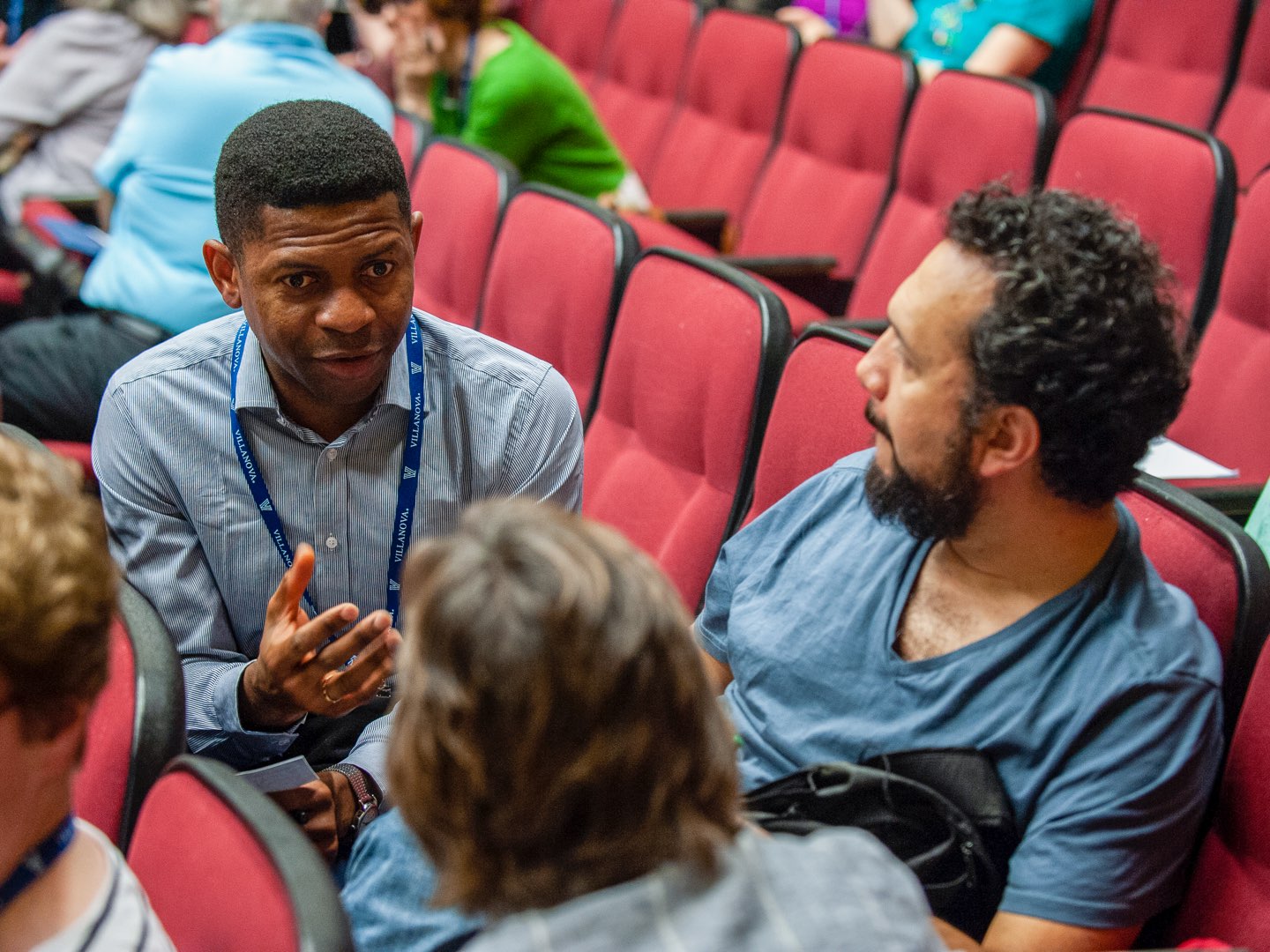 From across the globe came women and men, laity and ordained, to take part in “Francis, a Voice Crying Out in the World: Mercy, Justice, Love and Care for the Earth.”

Presenters opened windows into Francis’ life, spirituality and mindset. They shed light on what makes him tick and dispelled misconceptions. For example, they examined how Francis’ words and actions build on those of previous popes. In particular, the speakers pointed out ways in which Francis is continuing the renewal begun at the Second Vatican Council.

Called Vatican II for short, the historic council brought together bishops, theological experts and non-Catholic observers from around the world in the early ’60s to discuss how to reinvigorate the life and mission of the Church in the modern world. While the Church experienced immediate outcomes from the council’s decisions — Mass in people’s native tongues, a stronger role for laypeople and openness toward other faith traditions — some changes are still unfolding.

Keynote speakers making the case that Francis supports this ongoing renewal have devoted their careers to understanding all things Vatican II. Harvard-educated historian and Georgetown professor the Rev. John O’Malley, SJ, PhD, has written internationally acclaimed books on church councils and other topics. Villanova’s own Professor of Theology Massimo Faggioli, PhD, a leading church historian, spent years studying in the Vatican Secret Archive and is frequently consulted by the media.

“The conference placed Pope Francis within the Church’s tradition without idolizing him,” says the Rev. Ikenna Paschal Okpaleke, a Nigerian priest earning his doctorate at the Catholic University of Leuven in Belgium. “It stressed that what is at the center of these types of discussions is our fidelity to Christ and our love for the faith.”

In some ways, though, the current pope breaks the mold. He is the first to take the name Francis; first to have come from the order of priests known as the Society of Jesus, or Jesuits; first to have been born in South America; and first since the Second Vatican Council not to have participated in that momentous event. How have these factors shaped him?

“Francis’ perspective of the post-Vatican II era differs from that of people in the industrialized West,” Dr. Faggioli says. “In the United States especially, many Catholics associate the political and social upheaval of the 1960s and 1970s with a weakening of the Church. Because Francis lived in South America, he saw a Church that was becoming more authentic, distancing itself from militarist regimes and opening up relations with other Christians.”

Cardinal Óscar Andrés Rodríguez Maradiaga, SDB, the archbishop of Tegucigalpa, Honduras, shared his reflections as a fellow Latin American clergyman. Having known the pope for years, he drew on personal experience to speak about Francis’ concern for human welfare, devotion to Mary and simple lifestyle.

The Church in Africa can relate to Francis’ “global south,” developing-world perspective, according to the Rev. Agbonkhianmeghe Orobator, SJ, PhD, the president of the Conference of Major Superiors of Africa and Madagascar. In his address, Father Orobator described how Francis’ leadership style, which emphasizes outreach to the peripheries, resonates with a continent that has suffered much.

The Rev. Antonio Spadaro, SJ, took up the topic of what it means that Francis is a Jesuit. The editor of La Civiltà Cattolica, Father Spadaro connected Francis’ ideas on church reform with the spirituality of St. Ignatius of Loyola, who founded the Society of Jesus in 1540.

Like Ignatius, Francis believes that reform begins with oneself — a conviction he made clear when, in a 2013 interview with Father Spadaro, the new pope announced to the world, “I am a sinner.”

Pope Francis finds many ways to be a bridge builder — the meaning of the Latin word “pontifex.” One oft he most efficient is his use of Twitter. As of July 1, he had 1,622 tweets and 17.9 million followers. In messages on timely issues and timeless truths, he prays, teaches, encourages, corrects and consoles. (Villanova students interning at the Vatican helped to launch the @Pontifex account in 2012.)

Poverty is not an accident. It has causes that must be recognized and removed for the good of so many of our brothers and sisters.

Political activity must truly be conducted at the service of the human person, with respect for creation and for the common good.

A person's dignity does not depend on them being a citizen, a migrant, or a refugee. Saving the life of someone fleeing war and poverty is an act of humanity. #WithRefugees @M_RSection

We must overcome all forms of racism, of intolerance and of the instrumentalization of the human person.

The Holy Spirit gives us the strength we need to achieve holiness in the midst of our everyday lives.

“Francis’ leadership eminently embodies the principle of selfless and self-sacrificing service of the Gospel.”

The Rev. Agbonkhianmeghe Orobator, SJ, PhD, the president of the Conference of Major Superiors of Africa and Madagascar

Healing Humanity and the Planet

Several leaders in their respective fields discussed how the pope advances the Church’s commitment to social justice. As his predecessors have done for more than a century, Francis draws on the Gospel and Church teaching to respond to the signs of the times.

For example, guided by the principle that human beings are called to be stewards of creation, Francis has addressed the urgency of the environmental crisis. He spelled out the causes and consequences of destructive behaviors in his encyclical Laudato Si’. That document is high on the reading list of economist Jeffrey Sachs, PhD, the director of the Center for Sustainable Development at Columbia University and an adviser to the United Nations. In his keynote, Dr. Sachs echoed a critical insight from the document: If a market economy is not embedded in a moral framework, it will never defend the common good.

Francis repeatedly summons the world to address human rights violations. In her keynote, Margaret Archer, PhD, an eminent English sociologist and the president of the Pontifical Academy of Social Sciences, chronicled the academy’s efforts to investigate, at Francis’ request, the scourge of human trafficking. Its #EndSlavery initiative has made impressive strides.

In her closing talk, “The Pope on Migration,” Professor of Law Michele Pistone, JD, director of the Clinic for Asylum, Refugee and Emigrant Services at Villanova University Charles Widger School of Law, spoke about the plight of migrants and refugees, and the clinic’s efforts to access legal pathways. Noting that Pope Francis has called upon Catholic universities to support migrants and refugees through research, teaching and social promotion, Professor Pistone gave the audience a sneak preview of the Villanova Interdisciplinary Immigrant Training Studies for Advocates. When launched, it will be the first university-based, online, interdisciplinary certificate program designed specifically to train a community of immigrant advocates.

Francis believes in the power of dialogue to bear fruit, and Villanova hopes this conference will do the same. To engage the larger public, the University has uploaded the keynotes to YouTube and will publish many of the talks in its Journal of Catholic Social Thought.

“The conference brought together speakers and participants around critical issues facing the Church and grounded those conversations in prayer and community so that we can go forward, search for truth and live the mission of Vatican II.”

While scholars from around the world were at Villanova to discuss Pope Francis, delegates from Villanova were at the Vatican to meet the pontiff himself.

University officials visited Rome to immerse themselves in Villanova’s Augustinian heritage, a trip generously financed by members of the Board of Trustees. They especially anticipated an entry on their itinerary for April 14: a private audience with Pope Francis in the Apostolic Palace.

Pope Francis, in turn, encouraged school officials to be faithful to their Augustinian Catholic identity by addressing “ethical and cultural challenges” and promoting “the practical solidarity needed to combat the grave inequalities and injustices that mark today’s world.” 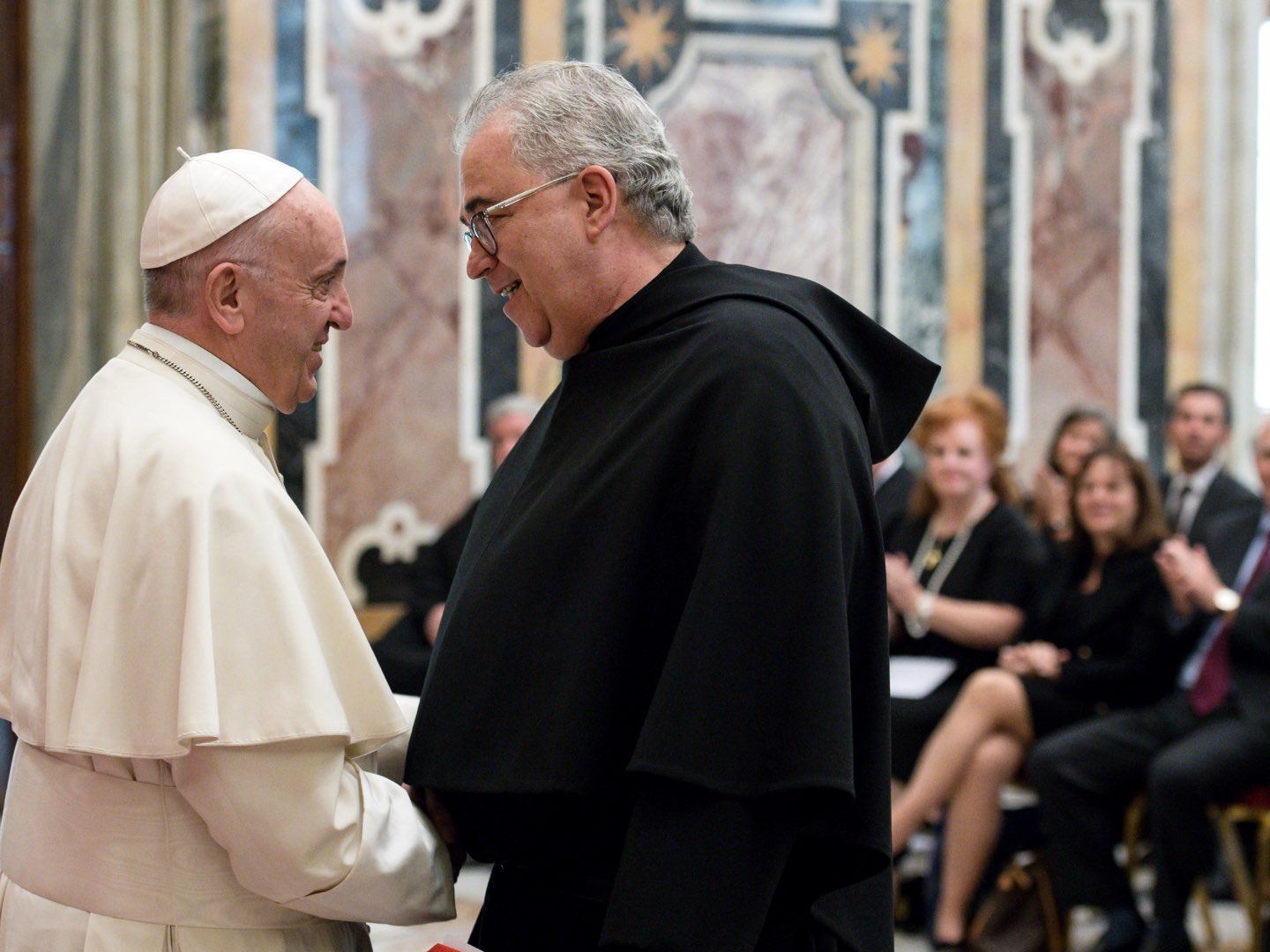 Engineers Caring for Our Home

To find scholars to speak at breakout sessions on Francis and the environment, organizers only had to look across campus for some of the panelists. The College of Engineering is a leader in applying the concepts of Laudato Si’.

Building on the pope’s 2015 encyclical, the College emphasizes in its Sustainable Engineering curriculum and research the cyclical nature of products and processes, noted Bill Lorenz ’68 COE, the program director and one of the panelists. For example, Villanovans are working with a global beauty company to explore biological sources for petroleum-based products.

Faculty and students also travel to various countries to provide technical services for the sustainability of water-supply infrastructure in low-income developing communities. In keeping with Catholic social teaching, the College teams with “organizations that have the capacity to implement local solutions,” explained panelist Jordan Ermilio ’98 COE, ’06 MS, the director of Engineering Service Learning.

For eyewitness accounts of the Second Vatican Council, Villanova can turn to Bernard Prusak, JCD, a former chair of the Department of Theology and Religious Studies, and a faculty member since 1969.

As a young man pursuing a doctorate in canon law in Rome, Prusak saw history being made from a front-row seat. Technically, he was on his feet, as his job was to distribute papers and collect votes from the bishops in the section of St. Peter’s Basilicato which he was assigned. Still, he was present for the council’s final session, held from October to December 1965, when nine of the 16 documents to come out of Vatican II were approved.

But the memory that is most poignant for Dr. Prusak came Dec. 7. Pope Paul VI and Patriarch Athenagoras I removed the sentences of excommunication that their respective churches, Roman Catholic and Orthodox, had leveled against each other 900 years earlier.

Two prominent Catholic thinkers with different visions of the Church and the current papacy decided that exchanging limited-character tweets was not the most productive form of debating.

The opportunity for a personal encounter to listen to — and, at times, disagree with — each other’s arguments and concerns paid off. It sent a powerful message that came up more than once at the April conference: Believers with opposing ideas about Francis are not enemies. As with any theological matter, they need to dialogue.

“Empathizing with those you disagree with is fundamental — not just to be nice but to understand what they mean,” Dr. Faggioli says. “I think that happened with Ross and me.”

All Can Be of Service