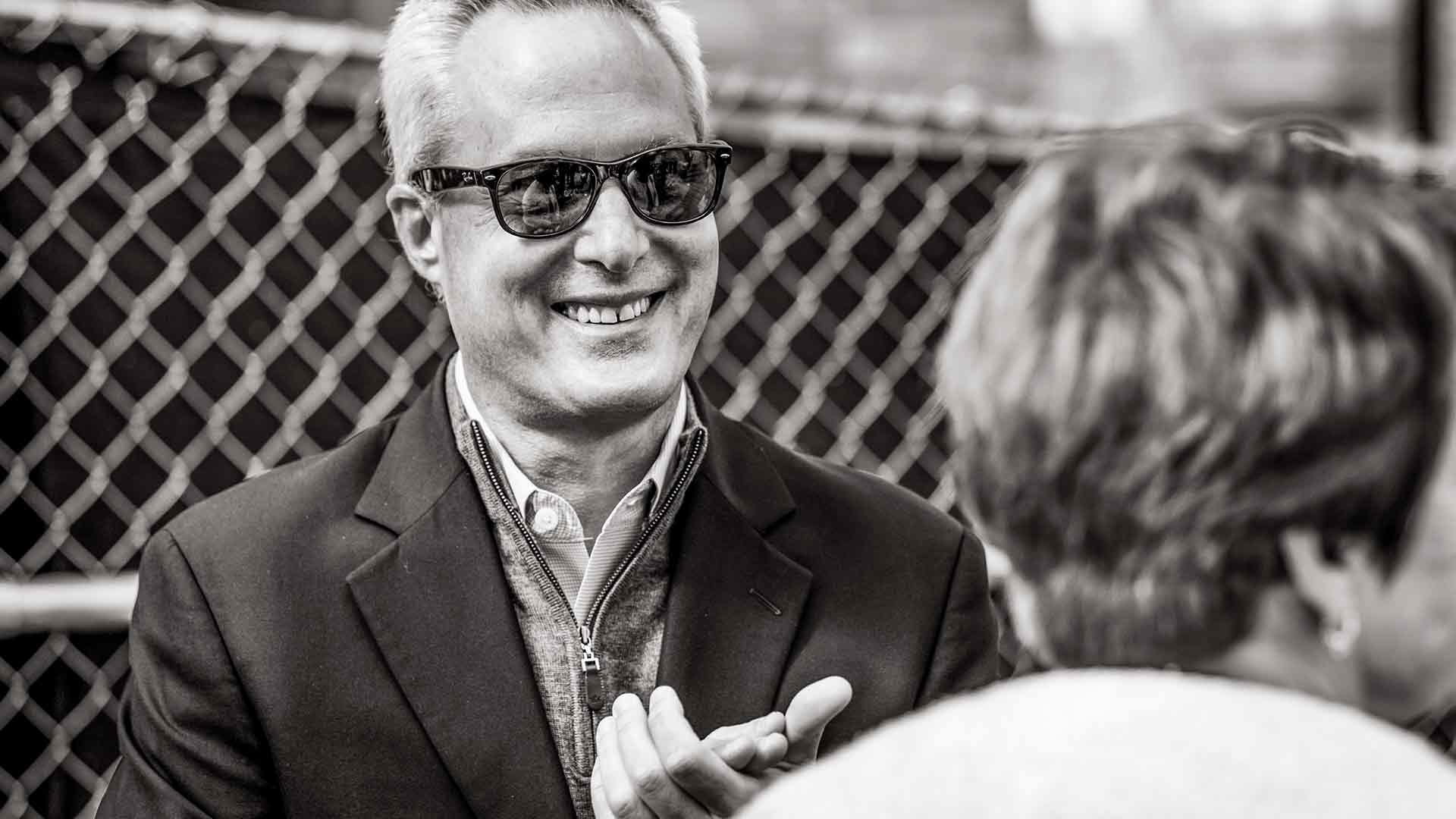 In many ways, Executive Vice President Ken Valosky ’82 VSB has the quintessential Villanova story—a degree in Accounting from the Villanova School of Business, a successful career as a CPA and finance executive that led him back to Villanova 20 years ago, a dedication to Wildcats basketball, and two daughters who followed in his footsteps as Villanovans. His ties to his alma mater are deep and true, but there is one experience he can’t claim: He never lived full time on campus as a student.

Like nearly half of Villanova’s student body in the 1970s and early 1980s, Valosky commuted to campus, driving each day from his family home in Huntingdon Valley, Pa. He traversed the vast parking lot on Lancaster Avenue to Bartley Hall for his business classes, then back through the parking lot and home again in the evening.

One summer, Valosky lived on campus to take courses, and his eyes were opened to the rewards of a residential college experience—the chance to study with friends, gather for meals in the dining hall, make yourself at home on campus, and really immerse yourself in the community. Fast forward nearly 40 years, and Valosky oversaw every aspect of the planning, financing, construction and opening of The Commons, the largest residential building project in the University’s history.

It’s the kind of full-circle moment that makes a demanding, 24/7 job feel like a gift. And a moment that also feels like the fitting capstone to a career dedicated to driving the University continually forward.

Valosky will retire in June, after two decades in various Finance and Administration roles, including six years of service as the University’s executive vice president.

“I've felt so fortunate and privileged to have been here for these past 20 years and to work with so many outstanding trustees, senior leaders, staff, faculty and students,” he says. “It's just been an unbelievable experience, and one that I couldn't have envisioned when I started 20 years ago and, really, even upon entering the halls of Villanova back in 1978. I pinch myself when I think about it.” 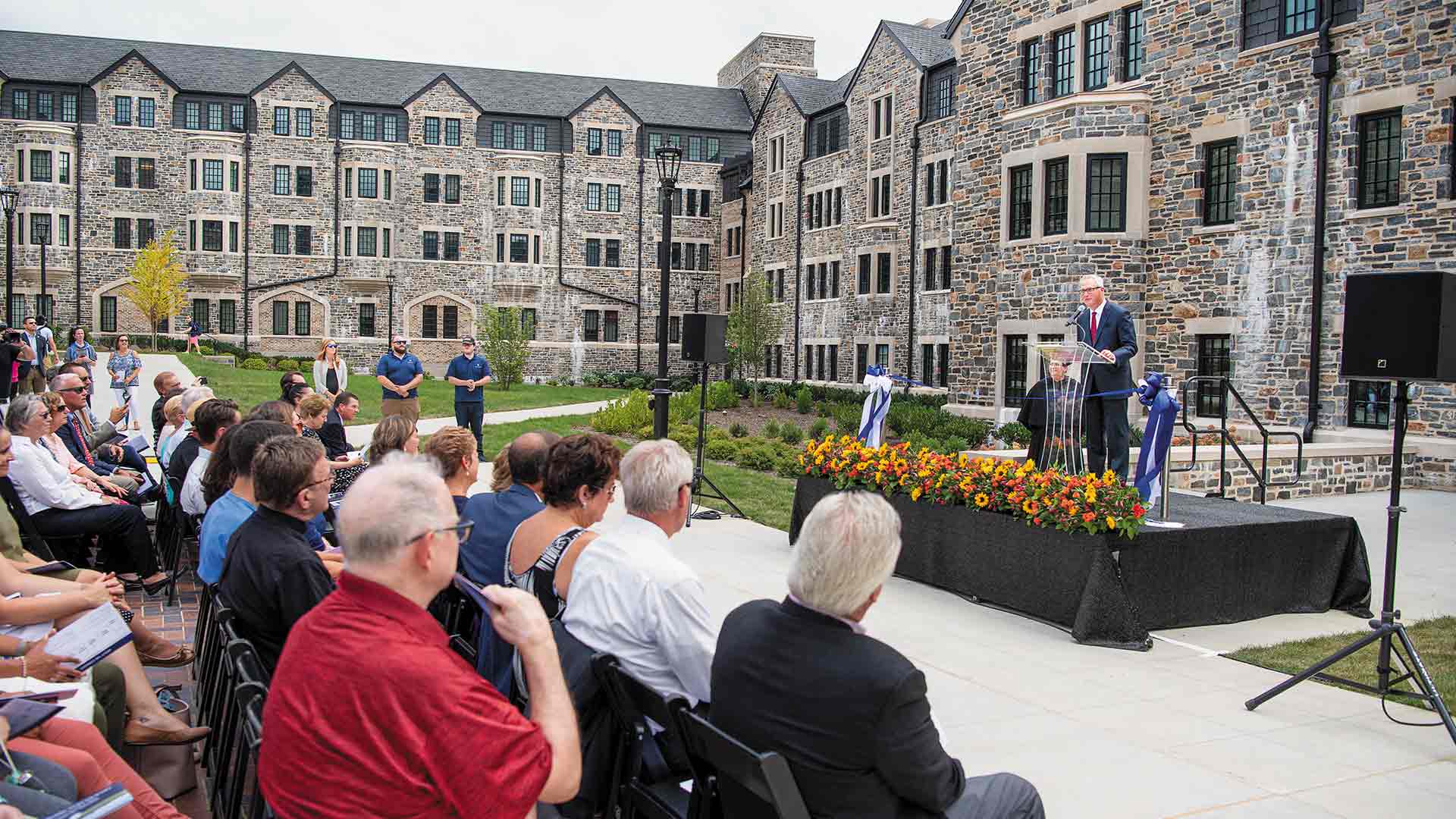 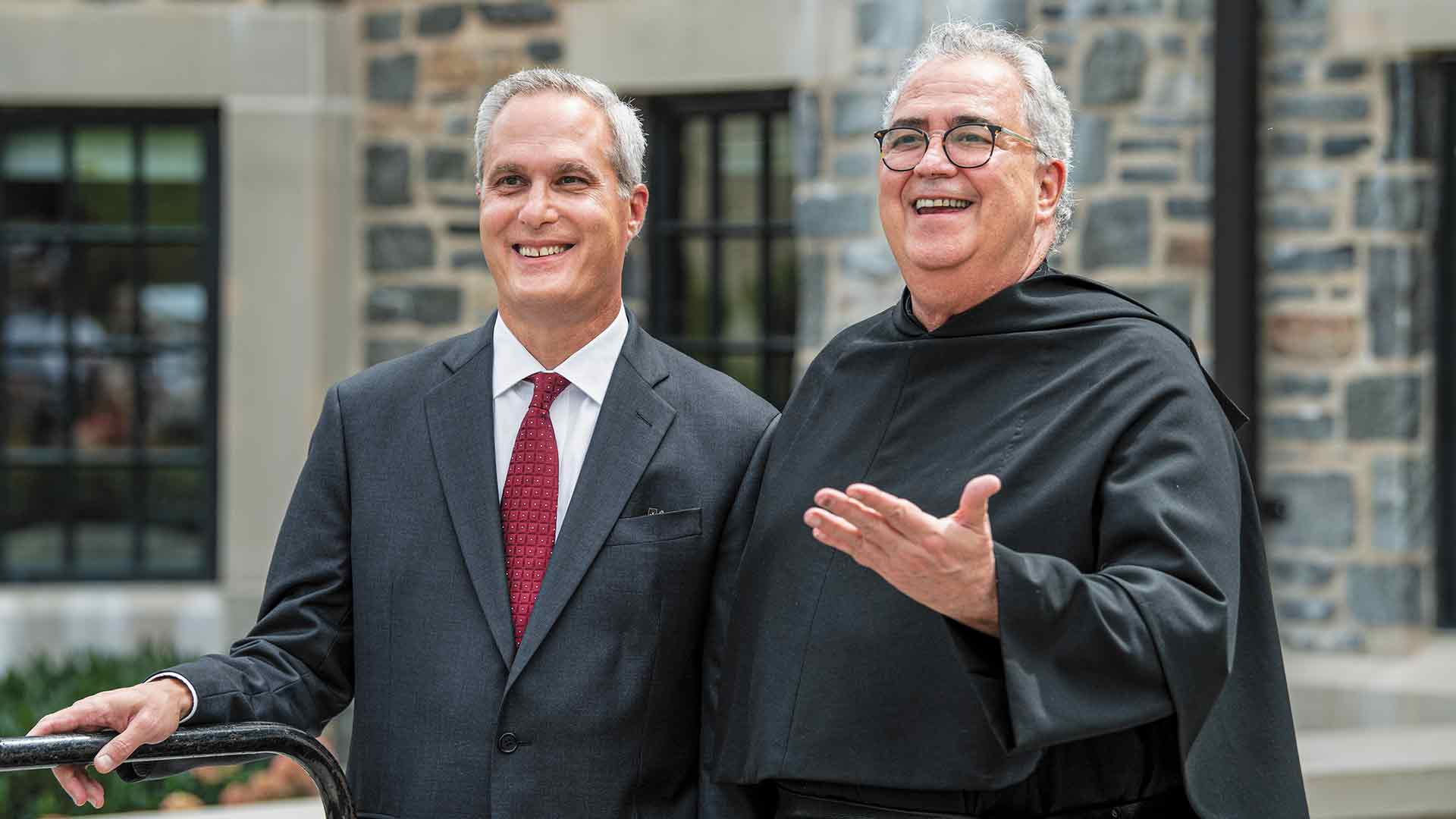 Nearly $800 million in capital projects have transformed the campus over the past two decades, and Executive Vice President Ken Valosky ’82 VSB has worked closely with University President the Rev. Peter M. Donohue, OSA, PhD, ’75 CLAS on every single one.

For someone who had never set foot on campus before his First-Year Orientation in 1978, Valosky has left some deep footprints around the place. The Commons; the John and Joan Mullen Center for the Performing Arts; Driscoll Hall; John F. Scarpa Hall, home of the Charles Widger School of Law; renovations to the Finneran Pavilion and Sheehan and Sullivan halls; the walking paths that have made the campus more attractive and walkable—nearly $800 million in capital projects have transformed the campus over the past two decades. Valosky, working closely with University President the Rev. Peter M. Donohue, OSA, PhD, ‘75 CLAS, has been a guiding force in every aspect of those projects.

But his accomplishments go far beyond what you can see. In addition to Facilities, Valosky’s areas of responsibility have included Finance, Emergency Management, Information Technology, Public Safety, Human Resources, External Affairs and Community Relations, Internal Audit and Auxiliary Services. In his purview is a vast swath of University functions that touch every aspect of the experience of students, faculty, staff and visitors.

“In my 15 years of working with him, he’s always been dedicated to wanting to make this a comfortable place for people to live and work,” says Father Peter. “It’s personal for him.”

Valosky spent nearly 20 years at a national accounting firm and at Thomas Jefferson University in Philadelphia before returning to Villanova in 2000 as chief financial officer. Over time, his role expanded, culminating in his elevation to the newly formed Executive Council in 2015, an entity that provides strategic oversight and leadership and that also includes Father Peter, Provost Patrick G. Maggitti, PhD, and Senior Vice President for Advancement Michael J. O’Neill.

A focus of Valosky’s Villanova career has been to ensure that the University remains on strong financial footing, which has provided the foundation for Villanova’s growing national stature in recent decades.

“ For Ken, it really is important that Villanova does more than survive — that it excels. And he's been instrumental in achieving that level of excellence.”

The Rev. Kail C. Ellis, OSA, PhD, special assistant to the President and dean emeritus of the College of Liberal Arts and Sciences, recalls the effort a decade ago to steer Villanova toward official recognition by the Carnegie Foundation as a doctoral-research university. To do so required resources—to add doctoral programs, to hire additional faculty and to boost the academic research enterprise. Valosky’s leadership on the financial side of the plan was critical to the Board of Trustees’ decision to move forward on this ambitious path.

“Ken had the vision to realize that Villanova now had an opportunity to advance to the doctoral program level,” says Father Ellis, who was vice president for Academic Affairs at the time. “His advocacy proved crucial to this endeavor, as did Father Peter’s support and vision.”

Elevating the standard of excellence

In the past year, Villanova’s preparedness for major events, which encompasses so much of the work of Valosky and his team, has been put to the test during the COVID-19 pandemic, when Villanova had to take swift and definitive cost-cutting steps. This quick action, coupled with the University’s strong financial position, allowed Villanova to avoid furloughs and layoffs and maintain stability throughout the pandemic.

The University has weathered these and other challenging times thanks to the financial discipline that Valosky has championed. His efforts shepherded the University through the 2008 global economic crisis and led to the University’s consistently high credit ratings from independent ratings agencies Moody’s and Standard & Poor’s. Due to Valosky’s responsible leadership, the University’s endowment and operating budget have grown substantially over his tenure.

“Villanova’s culture runs through the operations of the University, and Ken is responsible for that. He has created the culture of fiscal prudence and of constantly elevating the standard of excellence,” says Joseph V. Topper Jr. ’77 VSB, who served as chair of Villanova’s Board of Trustees from 2017 to 2021. “Everything he does is in the context of what’s in the best interest of Villanova.

Valosky is looking ahead now to a retirement that includes more time with his wife, Lisa (who also worked at Villanova for 17 years as a senior-level administrator), his twin daughters, Katie Valosky ’12 CLAS and Kristen Valosky Burns ’12 CLAS, his son-in-law, Jim Burns ’19 MBA, and his infant grandson, Gabriel. There will be more time for travel and for indulging his interest in history and genealogy, and less time tethered to a work phone that rings day and night, where he is always available to help navigate an issue or make a decision.

“Ken is so good with the financial matters, and in that way he has positioned Villanova for its future,” says Father Peter. “But there’s also the heart of it. For him, it really is important that Villanova does more than survive — that it excels. And he’s been instrumental in achieving that level of excellence. He has seen it as his responsibility to always protect Villanova — not only the image of Villanova, but the treasure that is Villanova to him.

The hours were long, the demands were high, but the rewards for Valosky — 20 years of opportunities to do so much for a place he loves so much—were priceless. He deflects credit, though, to his colleagues and to those who came before who have worked tirelessly to bring the University to this moment.

“We were really given a solid foundation by the previous generations of Villanova presidents, Augustinians, faculty and staff, who have allowed us to be able to take the University to new heights, and we can’t forget that we need to take the long view,” he says. “Villanova has been here for 175-plus years, and we have to think of ourselves as stewards of the University to ensure that it continues and that others benefit from it in the way that we and all Villanovans have.” ◼︎

From the Blue Skies to Blue Sky Thinking