As he packed his bags to return to Madagascar in June 2018, Eric Wagner ’12 CLAS checked off the items on his list: toothbrush, socks, umbrella, charger, … drones. The Villanova alumnus, an expert in geographic information systems, or GIS, was fulfilling a promise he’d made the previous summer to Catholic Relief Services in the world’s fourth largest island: to personally deliver unmanned aerial vehicles and related equipment. ◼︎ Villanova has enjoyed a 13-year institutional partnership with CRS, the overseas relief and development agency of the Catholic Church in the US. Since 2015, the University has been involved year-round with helping CRS and its Malagasy partners to carry out a project funded by the US Agency for International Development in Madagascar. The project’s goals in this nation off the southeastern coast of Africa are to promote the health and nutrition of pregnant women and young children, increase and diversify household incomes, and build communities’ resilience to disasters. ◼︎ On site and in the classroom, faculty, staff and students have shared their time and knowledge in areas such as water infrastructure, health, hygiene and microlending. Now they’ve added drone technology, which can take humanitarian work to new levels. 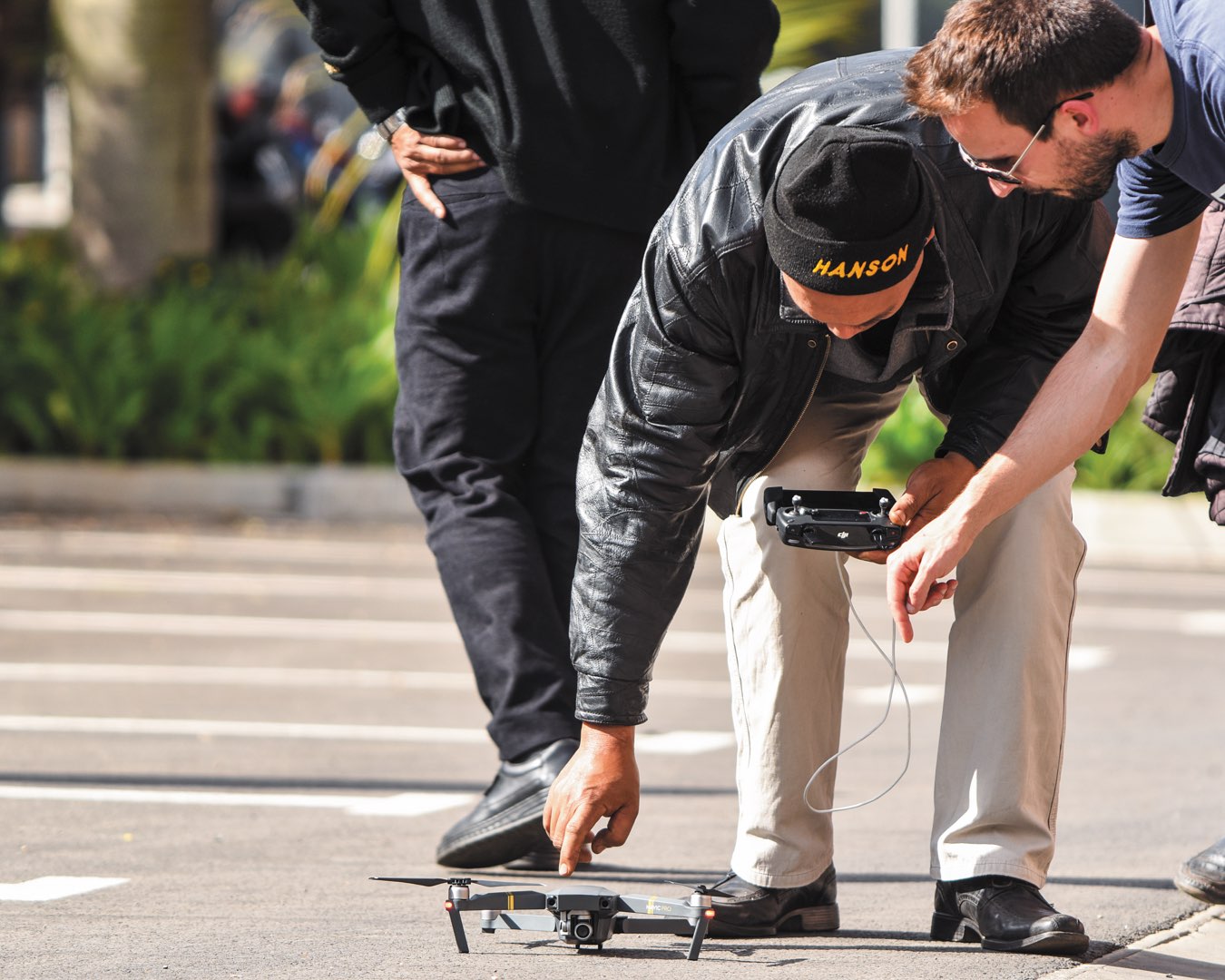 From introducing drone technology to conducting research for water-related projects, Villanovans collaborate with CRS staff in Madagascar on humanitarian initiatives.

After they arrived in Madagascar, Wagner, then an instructor and GIS lab manager at Villanova, and two graduate students laid the foundation for CRS staff to become proficient with drones. During two weeks of classroom presentations and hands-on tutorials, the Villanovans imparted their expertise, teaching staff how to develop and carry out a flight plan and to fly drones through manual controls.

The opportunity to educate others by building on what they had learned at Villanova was exciting for the graduate students. “A significant number of drone applications involve the integration of GIS software,” says Nick Zoccoli ’17 COE, who will finish his master’s in Civil Engineering in May. “My coursework in the Department of Geography and the Environment provided strong background knowledge in GIS, which aided in my explanation of certain drone concepts to the new users.”

The lessons were a success. Novice operators were soon collecting imagery of projects such as water delivery systems and dune stabilization. “It was definitely rewarding to receive a video from Madagascar showing the successful application of the drones only months after our teaching experience,” Zoccoli says.

Because drones can get detailed, real-time imagery superior to that of satellites, increasingly experienced users in Madagascar will be able to make informed decisions and respond quickly—for example, in getting aid to villages devastated by a tropical cyclone. Drones also are more affordable and efficient than helicopters at assessing situations from above.

Wagner, an FAA-certified drone pilot and now a solution engineer at Esri, an international GIS company, had discussed the advantages of drones with CRS when he and a team of Villanovans visited Madagascar in summer 2017. The staff liked what they heard. But where and how would they get the proper equipment? He was on it, Wagner said.

Back at Villanova, Wagner and the College of Liberal Arts and Sciences Information Technology team customized a computer to do the sophisticated processing required for the data the drones would collect. With CRS funding, Wagner also purchased two aerial survey drones and eight trainer drones. At every step, he got input and feedback from staff in Madagascar. 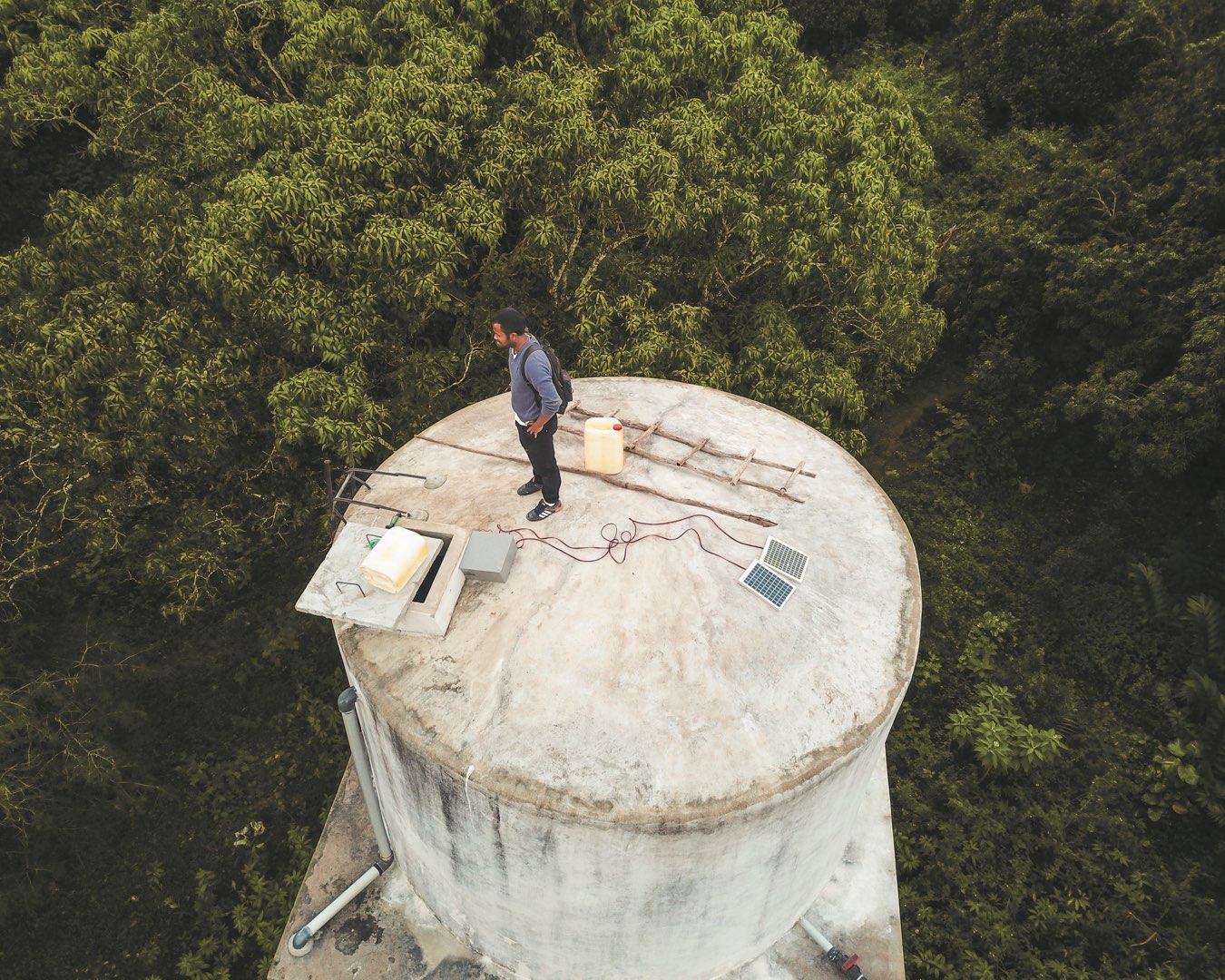 The introduction of drones was not the only reason why 2018 was a remarkable year in the Villanova-CRS partnership. A record 20 Villanova students received two-month, CRS-related internships. The 15 selected to support work in Madagascar came from nursing, engineering, French, geography and the environment, and business. In the three regions of Madagascar where most of the Villanovans interned, the mix was interdisciplinary.

“In summer 2018, we used an integrated approach to place the students,” says Josh Poole, the CRS country representative in Madagascar. “Students from different majors worked in each of three clusters, tackling the challenges of their respective communities from an interdisciplinary perspective.”

For example, nursing students in the cluster that worked with the Diocesan Development Council of Toliara gathered data on malnutrition and illnesses, such as diarrhea and malaria. The group of students then used their GIS skills in analyzing and mapping geographical data to visualize the findings. “By combining forces, we were able to map which areas had the most problems with which diseases so that local leaders could address these issues and better allocate resources,” Gaby Molina ’19 FCN says.

Julie Greenwald ’19 CLAS documented her work as a CRS intern in Madagascar, from landing in the country for the first time to interacting with local communities to applying her GIS knowledge to assess tree-planting projects that combat deforestation.

“By combining forces, we were able to map which areas had the most problems with which diseases so that local leaders could address these issues and better allocate resources.”

Beyond the number of students and the interdisciplinary benefits, Villanova’s partnership with CRS “has reached a high-water mark,” says Dan Griffin, who oversees the partnership for the University. First, an unprecedented number of undergraduates participated in 2018. Second, they got to work in the field with professionals and those closest to each situation. Students didn’t simply tag along.

They applied their skills to the real problems of people whose lives they felt privileged to enter. “The best part of my job,” says Griffin, who served with CRS for 14 years, “is when students discover the compassion and genuine solidarity that motivate the best humanitarian service.”

Being “in the field”—the agricultural kind—was, to the surprise of Zainis Bob-Grey ’19 VSB, the best part of her experience. Zainis was involved with the Saving and Internal Lending Communities, a microfinance program. One of her tasks was learning about farmers’ production processes. She met with local growers and toured the often-swampy farmland. “I think of myself as a tech person,” Zainis says. “But I realized how important it was for me to walk around with and talk to the farmers. It gave me a new perspective on agribusiness.” 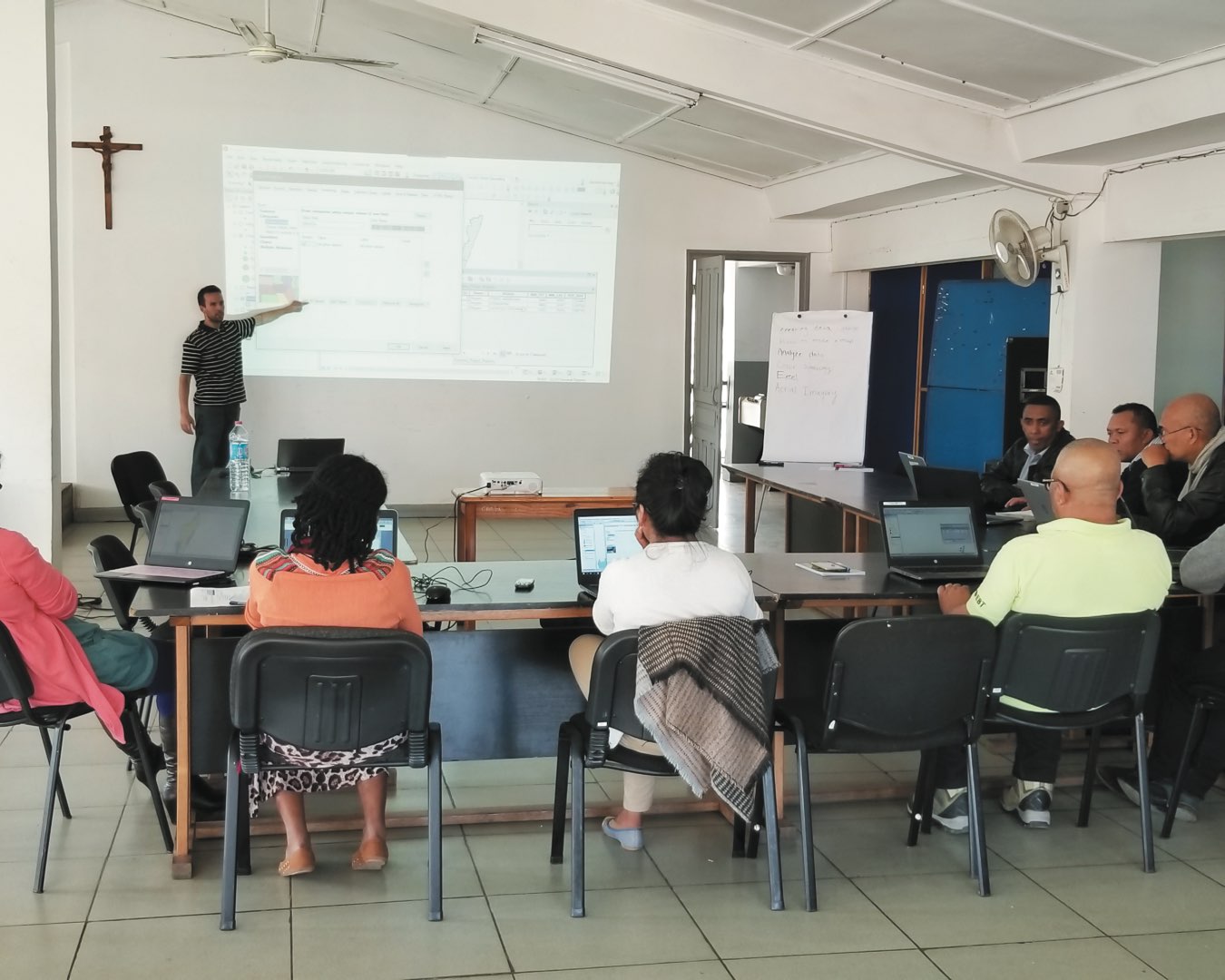 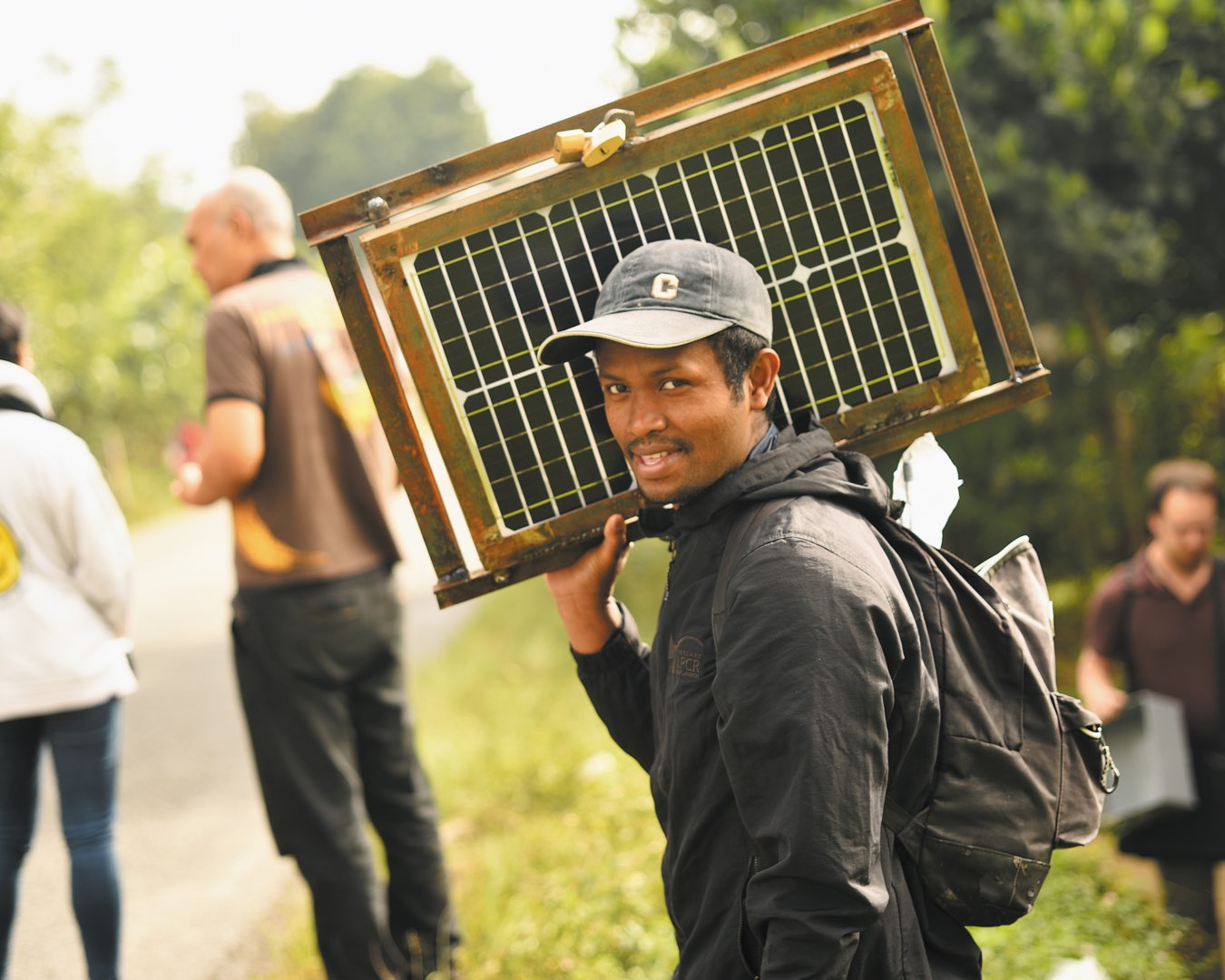 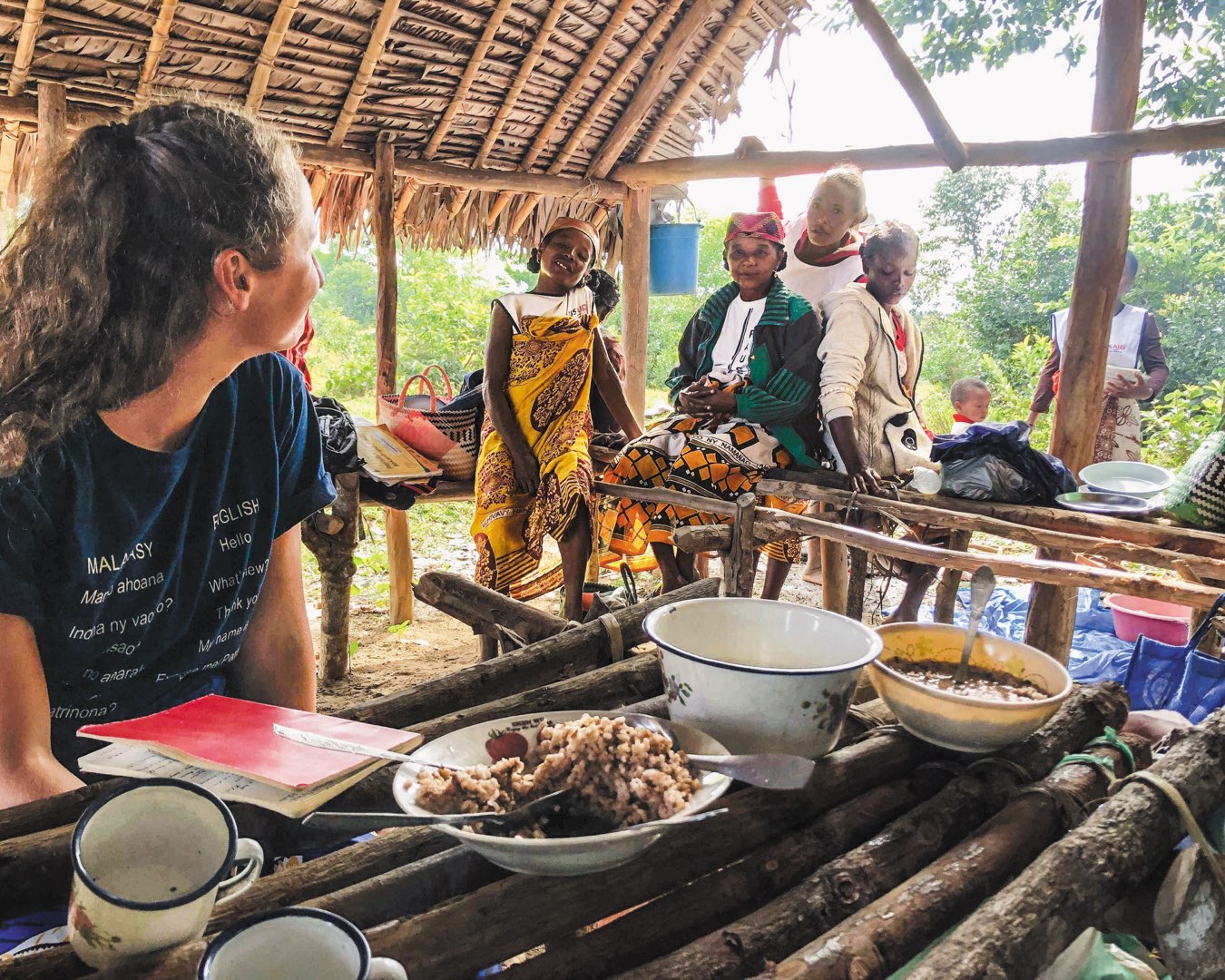 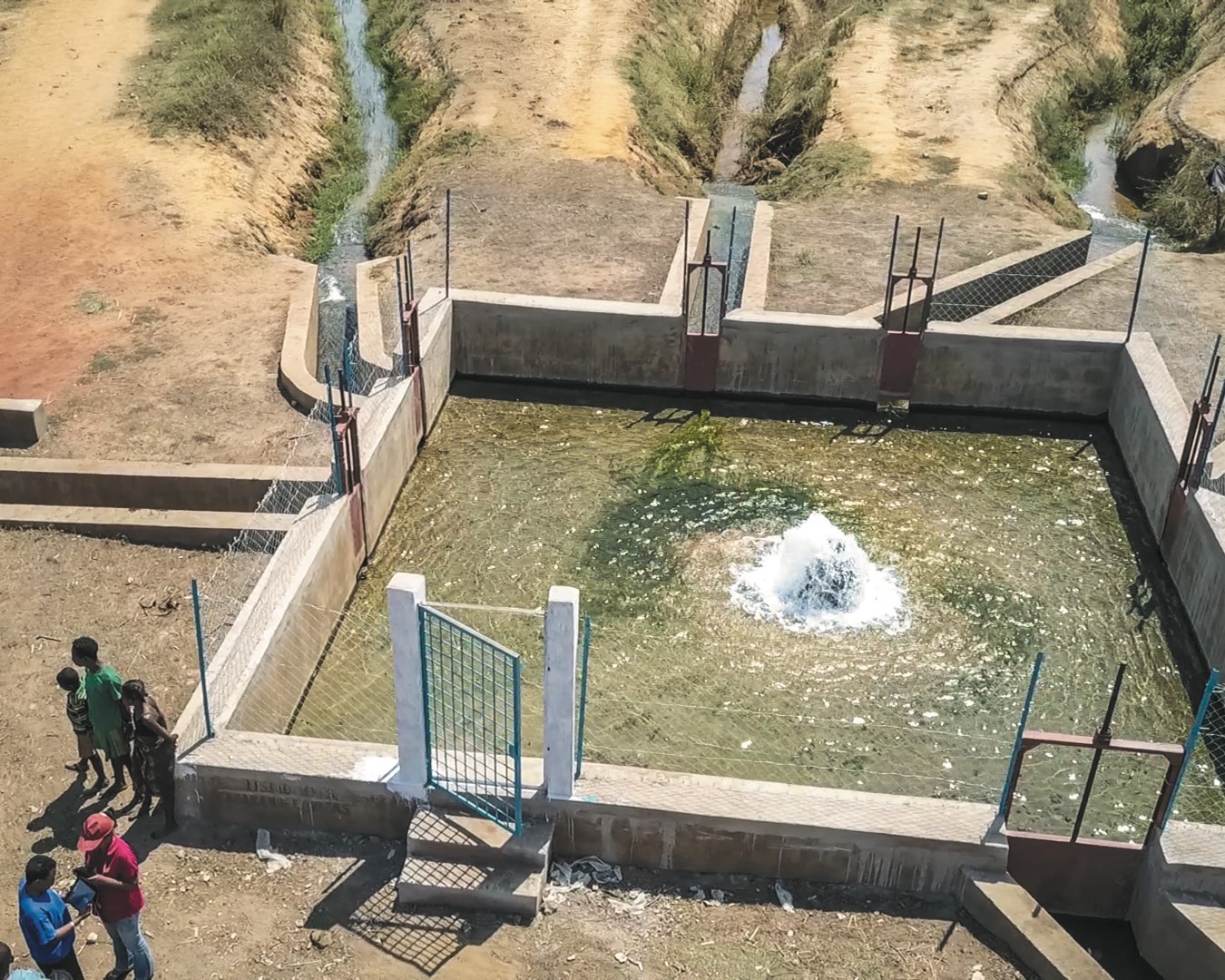 In the classroom and in the field, Villanovans and CRS work closely with Malagasy communities to develop their own solutions to local needs.

Got a Map For That?

Five undergraduates skilled in GIS interned in Madagascar in 2018. Another three stayed stateside, providing GIS support for countries in Africa via CRS headquarters in Baltimore. The demand for students with this knowledge reflects how, globally, the collection, analysis and visualization of geospatial data has become essential across industries for identifying problems, devising solutions and tracking results.

In Madagascar, which deals with food insecurity, natural catastrophes and environmental degradation, GIS can be a lifesaving tool. Villanovans help CRS and the organizations they work with to understand how to use the data they have and which data they should be amassing.

“The map is the starting point to determine how projects can be run and the people better served,” Wagner says. “By analyzing the data, you can see who takes advantage of opportunities and who doesn’t, and then figure out why. Are people not coming to food distribution centers or mobile health clinics because the route is impassable? The road unsafe? The distance too great?”

In 2018, much of the GIS work focused on collecting agricultural data. Trekking through rain forests and across wetlands, students used GIS applications on their smart - phones to map property boundaries so that farmers can more accurately estimate crop yields. As part of a data and statistics team in southwestern Madagascar, Andres Serbia ’19 CLAS mapped a canal and the agricultural parcels that it irrigates. His analyses will be useful in considering the impact of extending the canal to increase rice productivity. “We created data sets that future generations will be able to use for better analysis.”

Other students focused on infrastructure development and natural resource management. Teaming with the ECAR Development Office in Mananjary, on the eastern coast of Madagascar, Julie Greenwald ’19 CLAS used GIS to quantify data from satellite imagery to measure the success of tree-planting efforts, a critical initiative in areas where deforestation has led to ecological crises.

The Villanova students also trained their partners to use GIS analysis and mapping to organize and interpret existing data. For example, the students mapped levels of malnutrition in children ages 2 to 5, as well as the success of investments made by savings communities. They also introduced staff to state-of-the-art software. 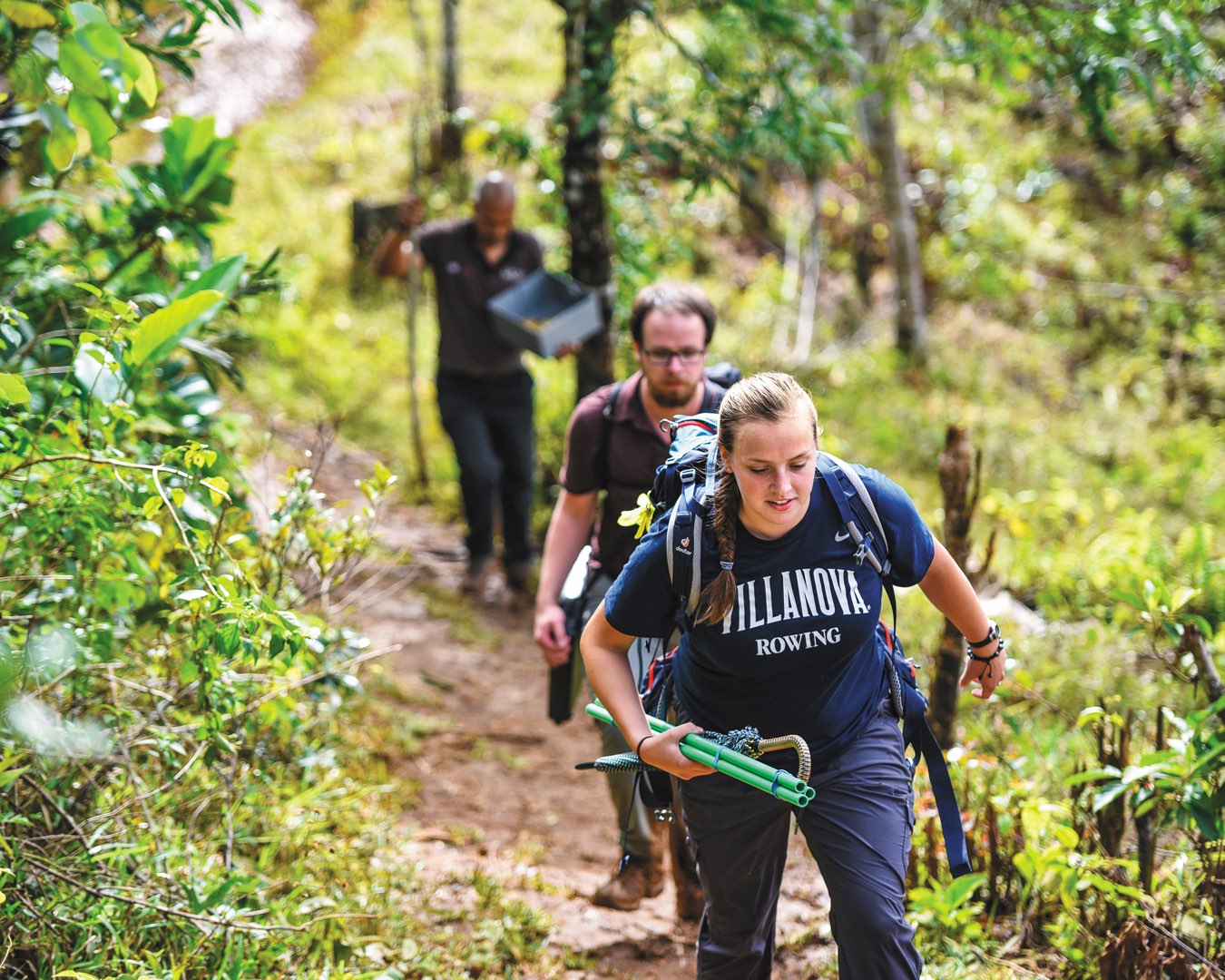 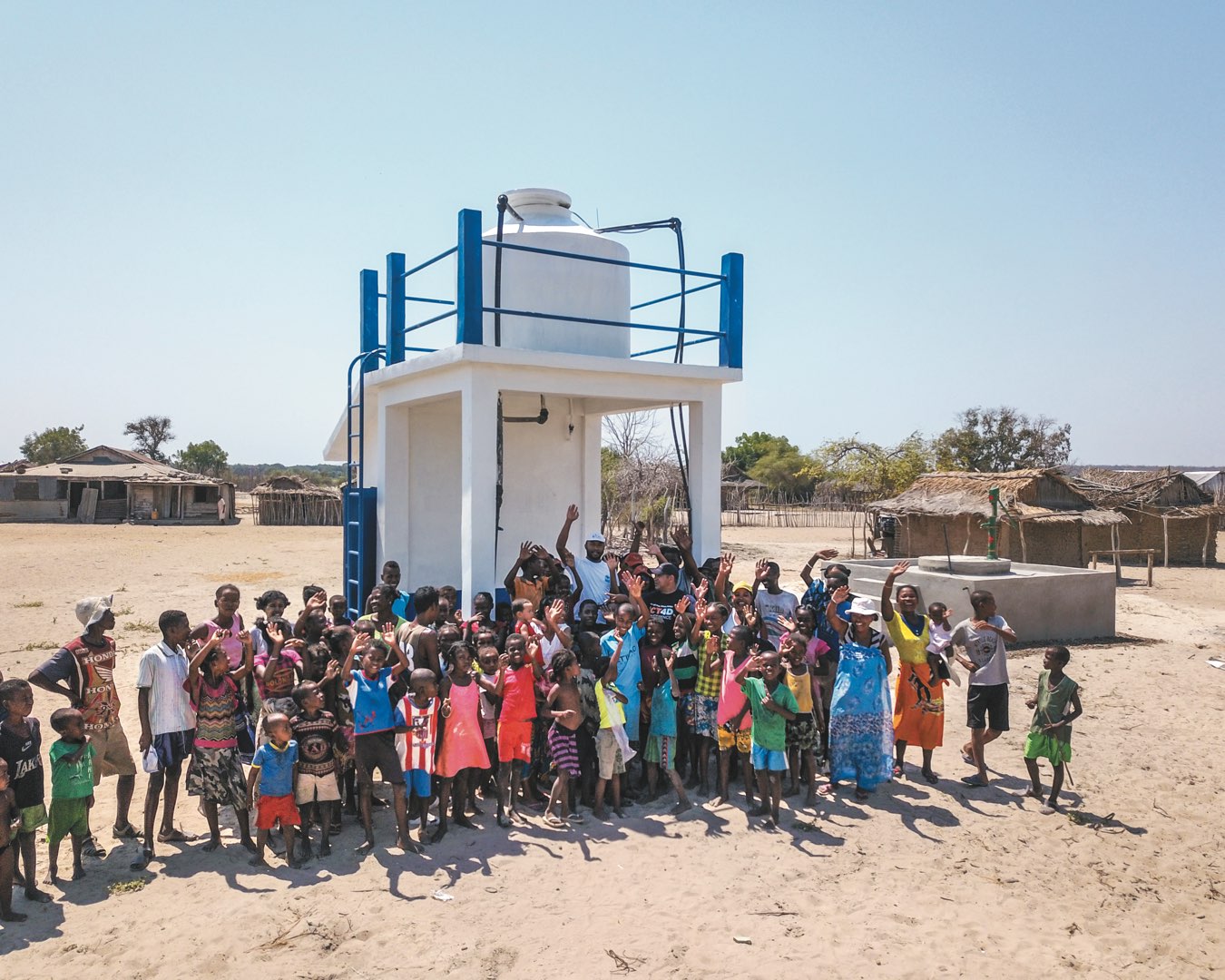 From the seriousness of testing drinking water for arsenic—more than half the population lacks access to potable water—to the enrichment of exploring Malagasy culture, Villanovans lived the University’s values. Students collaborated to bring new knowledge to light and worked with local people, joining in efforts to improve the quality of their lives, while respecting each person’s dignity.

“In the lab at Villanova, we would collect data and not think much about it,” says Jamie McGee ’19 CLAS. “But when we were in Madagascar, we saw that these numbers represented kids we were meeting and hanging out with. These numbers showed that their villages weren’t doing well. It made much more of an impact.”

For Barbara Wall, PhD, vice president for Mission and Ministry, helping CRS to promote the common good in Madagascar goes to the heart of what matters to this Catholic and Augustinian university. “We are partnering with an agency of the US Catholic Church in a part of the world that recently emerged from a history of colonialism and poverty,” Dr. Wall says. “Our students and faculty are growing in solidarity with these communities, working together for a more just and sustainable environment.” ◼︎

With slices of pizza at hand and music in the background, Villanova students can be found glued to their computer screens in the Geographic Information Systems lab, doing their part to help with disaster relief and development. They are members of GlobePlotters, Villanova’s student chapter of YouthMappers, an international network of universities that uses web-based, open-source GIS technologies to help communities be more resilient.

Started by GIS “alumni” of the 2017 Madagascar trip, the chapter contributes to humanitarian mapping projects around the world, especially those that require emergency responses.

“Helping people in vulnerable areas is the most rewarding aspect of the club,” says Amanda Bristowe ‘19 CLAS, one of the chapter’s founders. “It’s amazing that technology allows a group of students from Villanova to assist with a disaster thousands of miles away and see the impact they are creating through mapping.”

Investing in Who We Are

Seeking the good of those who are marginalized, and combining knowledge to better the world: These two values are not afterthoughts at Villanova. They guide its mission, unify its academic enterprise and calibrate its achievements. That’s why Villanova is so committed to the work of faculty and students in and on behalf of Madagascar—and why one alumni couple is so committed to Villanova, establishing the Michael J. and Theresa M. Mruz ’67 Global Peacebuilding and Social Justice Fund in 2016. Through the fund, the Mruzes support, expand and evolve the CRS partnership in Madagascar and other initiatives through the Office for Mission and Ministry.

When it comes to promoting social justice and human welfare—hallmarks of the Madagascar experience—the Mruzes recognize the importance of cross-college collaboration and strong external partnerships. Thanks to their generous gift, Dan Griffin says, “Students are seeing and learning that real-world, complex problems require a multidisciplinary approach.”