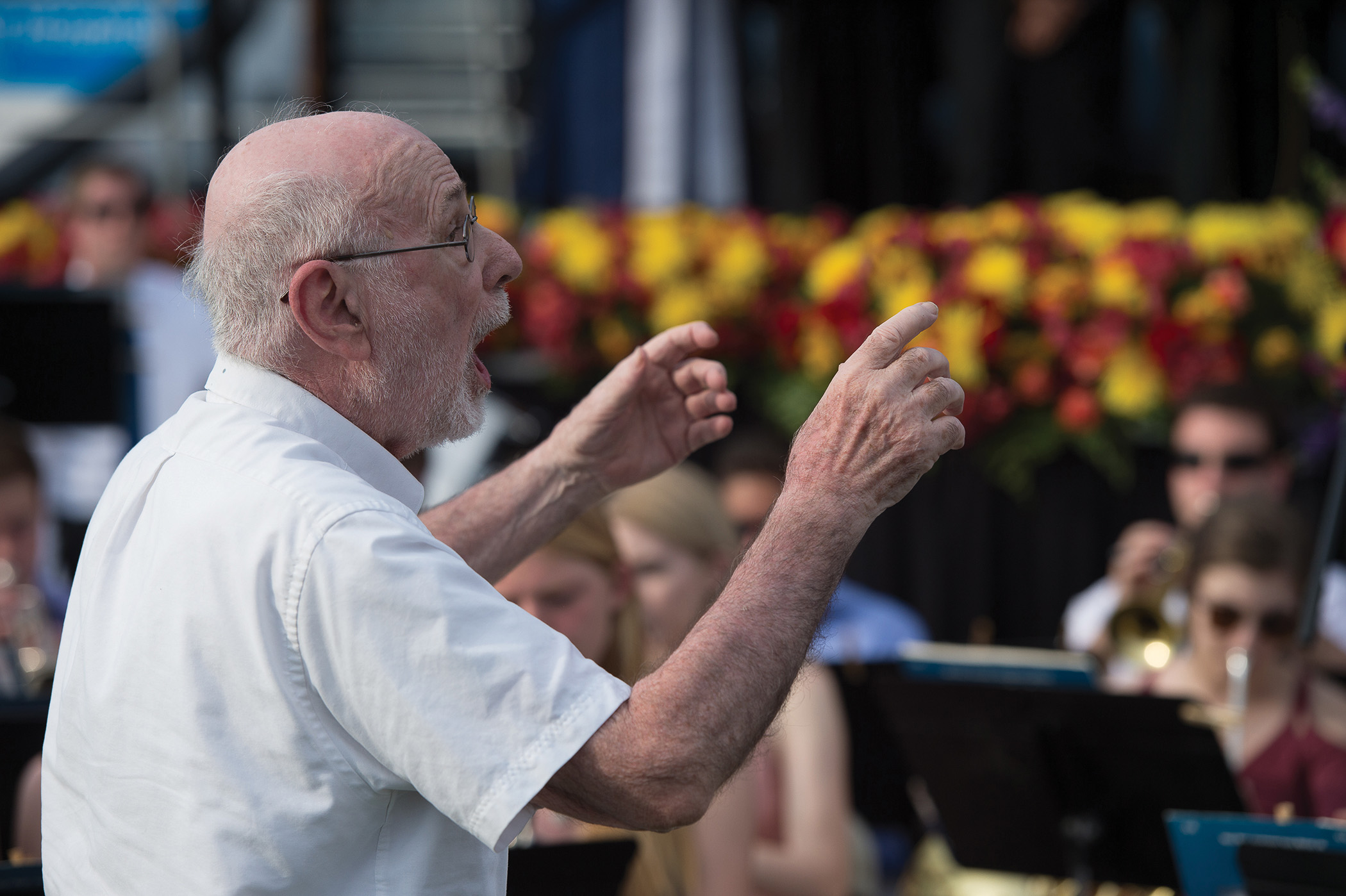 John Dunphy started his musical education on piano before picking up trombone at La Salle College High School. Later, he pursued Music Education at West Chester University, studying vocal music, brass, percussion, composition and more. He has taught music at every level from elementary school to college and has a long résumé as a liturgical musician.

At a youthful 81 years old, Dunphy still plays tuba every Sunday with a neighborhood quintet, the Wyncote Brass. He believes that music education is about more than just notes. It’s about learning to love what you do and caring for the people with whom you do it.

When Dunphy was hired as Villanova’s band director in 1979, there were three music organizations on campus: the Villanova Singers, the Villanova Women’s Glee Club (now the Voices), and a combination pep-scramble-concert band that played mainly at basketball and football games. “I reported to the director of Student Activities, who was in charge of everything from the hiking club to the cigar-smoking club,” recalls Dunphy, with his characteristic wry wit. “There wasn’t a specific focus on music, but the kids wanted the outlet. So year by year, I’d say, ‘What don’t we have?’ We started inventing groups as we went, growing where the need was.”

For 38 years, John Dunphy has “faced the music,” directing bands at every major Villanova event, including Commencement this past May.

By the time he retired this past summer, Dunphy had built an entire Office of Music Activities within the Office of Student Life, encompassing some 30 recognized student performing groups with more than 600 students participating each year. Villanova now has the multipurpose band (members call it “a Swiss army knife of a band”), 10 dance companies, seven a cappella groups, two theatre groups and a stage crew, twirlers and other band auxiliary groups, an orchestra, a gospel choir, and a jazz ensemble. They perform at sporting events, concerts and programs across campus, throughout the Philadelphia area, around the country and at international venues.

Though it doesn’t offer an undergraduate performing arts major, Villanova has always attracted a significant number of students who have backgrounds in music, dance and theatre. Dunphy saw that those students had a passion for performing, but they also craved a sense of belonging.

According to Vice President for Student Life the Rev. John Stack, OSA, ’71 CLAS, ’77 MA, Dunphy has a gift for fostering a sense of community among students. He says, “We speak about it a lot, but John makes it happen. He works at it in a way that seems effortless. Over the years, the kids have known that he cares about them. They really look up to him.” 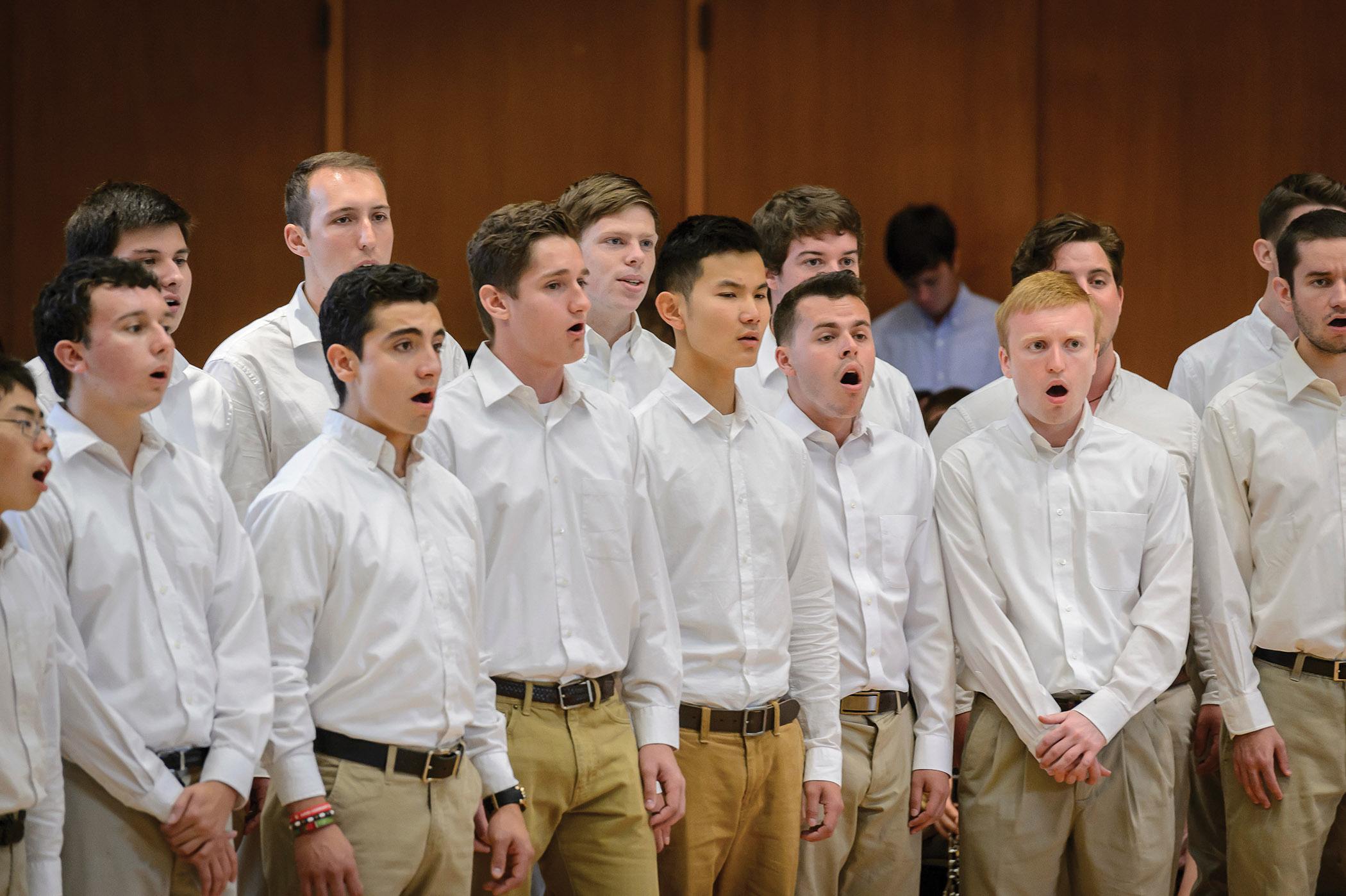 Through his love of the performing arts and his confidence in young people, Dunphy has nurtured the growth of a variety of talented student groups.

“Each of us has a short list of the people who have had a major influence and impact on our lives, and for many of us, that list starts with John Dunphy.” -George Moroney '85 COE

Dunphy developed a bottom-up philosophy for Music Activities, stressing student ownership of their organizations. The staff of the office still empower students to make decisions about scheduling, travel, budget and repertoire. In making art together, the students learn to collaborate, gain leadership experience and, of course, have fun.

Dunphy’s most visible role was with the band. He traveled to so many road games and tournaments that he jokes that his youngest daughter grew up on a band bus. Dunphy had one of the best seats in the house for both of the historic Men’s Basketball NCAA championships, in 1985 and 2016. Band alumni still refer to him affectionately as “Aldo,” a nickname he was given in 1979 after a character in a popular series of commercials.

George Moroney ’85 COE served in a variety of leadership positions during his four years in the band and says that the experience served him well on his career path toward his current position as senior manager for Mission Application Development at Lockheed Martin. “Aldo gave me leadership opportunities that have affected my whole professional career. He helped us by setting guidelines, establishing rules, and then backing out and letting us see how things would go.” 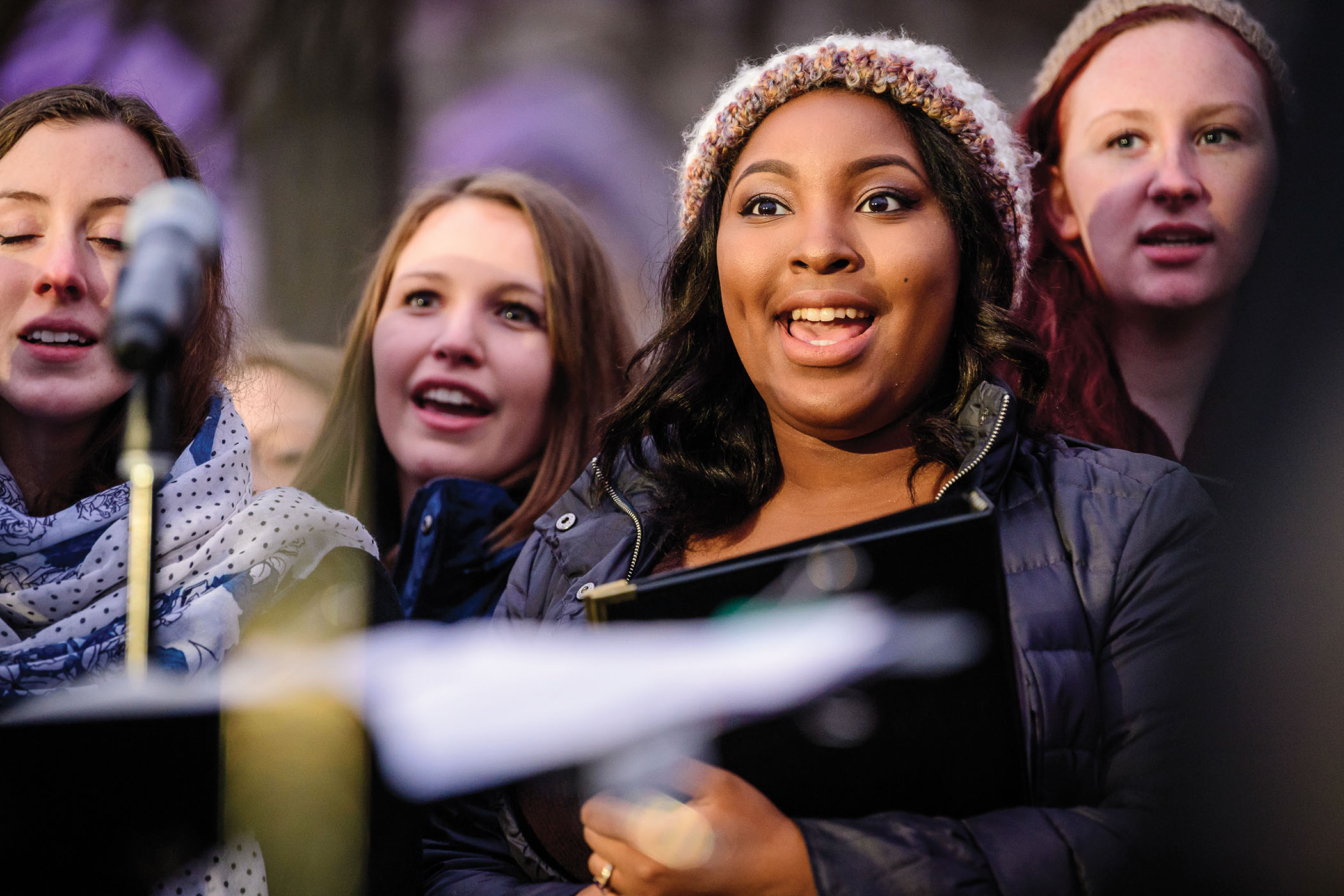 The de facto leader of the band alumni, Moroney forged lifelong friendships among band members (he even met his wife through a band connection) and says his relationship with Dunphy has only deepened through the years. “Each of us has a short list of the people who have had a major influence and impact on our lives, and for many of us, that list starts with John Dunphy.”

Mark Bowers ’17 CLAS, who was president of the band in 2016–17, stresses that the welcoming, inclusive tone Dunphy set for the band made it a respite from the rigors of academic life. “Aldo wanted us to work hard, but not to take ourselves too seriously,” he says. He recalls the time in 2013 when the band traveled to Buffalo, N.Y., to support the basketball team in the first round of the NCAA tournament. The team was scheduled to leave their hotel at 8 p.m., and alumni and fans were assembled in the lobby to offer a rousing send-off. As they waited, band members suddenly spotted their director riding the escalator up to the mezzanine level and then descending with a mischievous look.

“He said, ‘I have an idea,’” recalls Bowers. “And the next thing you know, we’re all on the escalators going up and down playing pep music before the team shows up. It was very spur-of-the-moment and very witty, and it was that kind of thing that helped define the character of the band.”

Though Dunphy hasn’t made any grand plans for his retirement, he is looking forward to spending time with his eight children, 15 grandchildren and seven great-grandchildren. He will also, undoubtedly, stay involved through the band alumni events that Moroney organizes. Every year, when the basketball team has games that fall during holiday breaks, Moroney pulls together willing alumni to get the horn out of the attic and play in support of one of the best basketball teams in the nation. If you happen to have a ticket to one of those games, look closely at the brass section. You might just see a veteran tuba player with a twinkle in his eye who is up to a little mischief.