During Villanova’s 174th Commencement, honorary degrees were bestowed upon four individuals whose character and achievements presented to the Class of 2017 a shining illustration of how the values inherent to a Villanova education can shape one’s life and impact the lives of others. 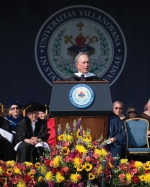 “The challenge we face is not restoring a mythical past, but building a brighter future—so that all people, in all regions of the country, of all backgrounds, have a fair shot at living out their American dream. … As the beneficiaries of a great university … you have a particular responsibility to be first in line to do so.” —Michael R. Bloomberg, Villanova Commencement Address

“Having had a more universal experience of Catholicism, I try to cast light on ideas that are distinctly American, some of which may be worth questioning,” Dr. Faggioli says.

Bloomberg’s record as an entrepreneur and a philanthropist is equally impressive. His technology firm, Bloomberg LP, which brings financial data and analysis to Wall Street professionals, started with four employees in 1981. It now has 19,000 employees across 73 countries.

He has also donated billions to causes related to education, the environment, public health, government innovation and the arts.

“As a trailblazing leader in her own field, Anne is an enthusiastic advocate for women’s leadership, and actively supports initiatives that increase the representation of women in leadership positions and build inclusive environments that enable women to flourish.” —Amy Fleischer, PhD, ’91 COE, ’96 MS, professor and chair, Mechanical Engineering, and chair, steering committee, Anne Welsh McNulty Institute for Women’s Leadership

A former managing director at Goldman Sachs, McNulty is co-founder and managing partner of JBK Partners, which includes investment management and a private philanthropic foundation focused on leadership development and social change.

Along with her late husband, John, she established the McNulty Foundation, which supports individuals making a difference around the world.

A former member of the University’s Board of Trustees, she also generously provided funds to create the new Anne Welsh McNulty Institute for Women’s Leadership at Villanova, which centers on research, skills development, networking and advocacy.

“Father Wally … demonstrates the principles of Catholic social teaching by living in solidarity with the communities that he serves, and is an inspiration to all Villanovans for how one
can live out his or her faith in their daily lives.”—Frank Falcone, AP, PE, ’70 COE, ’73 MS, director, Professional Development and Experiential Education, College of Engineering

Father Kasuboski, known as Father Wally or Padre Pablo, has served as a Capuchin missionary priest in rural Panama for 28 years.

The construction company Father Kasuboski organized brings drinkable water to thousands of villagers via the largest rural water system in Central America. It has changed lives, created jobs and led to the construction of a new high school, a hospital, churches, and bridges and roads across the region.

Since the 1990s, College of Engineering students and faculty have traveled to Wacuco, Alto Bayano, to collaborate on building projects tied to Father Kasuboski’s mission.

“If you’ve ever had class with Irwin, or have been privileged enough to teach him as I did when I was in the Theatre Department, you know that he is not a passive attendee in class staying under the radar. Rather, he is an active participant, wanting to get the most out of each class and enthusiastically engaging in discussions.” —The Rev. Peter M. Donohue, OSA, PhD, ’75 CLAS, Villanova President

The longest enrolled member of Villanova University’s Senior Citizen Personal Enrichment Program, Medway has taken a class or two every semester for more than 24 years.

Medway, a World War II veteran and Purple Heart recipient, has shared with fellow students his experiences, including how he earned a Bronze Star medal by leading a group of servicemen to safety—without his helmet or rifle—after his lieutenant was killed beside him.

Both prior to his deployment and after the war, while working in sales for Columbia Records, Medway took college courses, but he never earned a degree—until receiving his honorary doctorate from Villanova.

Since 2012, Dr. Lloyd has served as co-editor for Political Theology. Now the College of Liberal Arts and Sciences is hosting the international journal, which has an online forum accessible to nonacademic readers. In January, Dr. Lloyd took on a new role as editor of the book series Reflection and Theory in the Study of Religion, published by the American Academy of Religion, the largest association in its field in the world.