The Smart Brain developed by Dr. Qianhong Wu and his team simulates exactly what happens during head injuries, including the impact to the Cerebrospinal Fluid 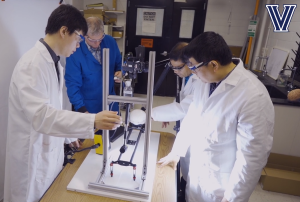 VILLANOVA, Pa. — Villanova University Associate Professor of Mechanical Engineering and Director of the Cellular Biomechanics and Sports Science Laboratory, Qianhong Wu, PhD, has been awarded a patent for his biomimetic model of the brain and skull. Mimicking the human head, Dr. Wu’s ‘smart brain’ allows researchers to quantify the motion of brain matter during exposure to impact.

This patent, along with research findings from the Cellular Biomechanics and Sports Science Laboratory will provide insight into what specifically happens to the brain when a person endures a head injury.

“The key to understanding concussions is the flow of the cerebrospinal fluid that surrounds the brain and separates the brain from the skull,” says Wu, who has devoted his career to biomedical engineering and biomimetics, including brain injury. His goal has been to better understand the mechanism of concussive and sub-concussive brain injuries, and to provide guidance for the prevention of these kind of injuries.

With a model consisting of a transparent skull, brain matter, supporting structure and watery cerebrospinal fluid, as well full instrumentation, including high speed cameras, accelerometers and displacement sensors, Dr. Wu’s smart brain enables the motion of the brain matter to be tracked and captured. Most importantly, his model allows for varied frequencies, locations and magnitudes of impact – as well as repetition – to better reflect real-life scenarios. In addition, multiple pressure sensors record the pressure generation inside the cerebrospinal fluid, which Dr. Wu believes is one of the major factors that determine the brain matter motion, as well as the damping effects (that which reduces the vibrations caused by impact).

Traumatic brain injury is a major cause of death and disability in the United States. The Centers for Disease Control reports that from 2006 to 2014 the number of traumatic brain injury-related emergency department visits, hospitalizations, and deaths increased by 53 percent. In 2014, an average of 155 people in the United States died each day from injuries that include a traumatic brain injury. Those who survive the injury can face effects that last a few days, or the rest of their lives, with impairments related to thinking, memory, movement, vision, hearing, personality changes, and depression.

The patent is the first of its kind because it focuses on an area that others have not paid attention to, which is showing how head injuries relate to the motion of the brain matter inside the skull. Wu says, “Now that we know exactly what the brain’s response to impact is, instead of monitoring concussions, we can now work towards preventing them.”

Wu and his PhD student Ji Lang used silicone gel to develop the Smart Brain to simulate a sudden impact on the brain. They attached sensors to the simulation and used high-speed camera to track and capture the motion of the brain matter. Wu collaborates with two medical doctors at Jefferson Hospital’s Comprehensive Concussion Center who perform advanced MRI imaging on each patient as a way to confirm Wu’s model.

Whether it be an injury from sports, a military event, construction/industrial work, an elder experiencing a fall, or from other accidents causing head trauma, concussion can cause headache, nausea, dizziness, sensitivity to light, blurred vision, slurred speech, ringing in ears, loss of consciousness, confusion, and memory loss.

Wu’s Smart Brain technology will have broad impact in both brain biomechanics and future helmet design not only for athletes but also for soldiers, construction workers, and others at risk with their day-to-day activities. “High-strength material can protect you, but you also need something soft to protect you,” says Wu.

“This is going to be a big, new area,” says Wu, who, in the second phase of his project, plans to construct a new helmet not only for protection but also for treatment. “We can design a helmet for each individual player because their heads are shaped differently. And our model will be able to inform doctors what area of the brain to focus on for treatment, our lab can help doctors zoom in on the specific damage.”