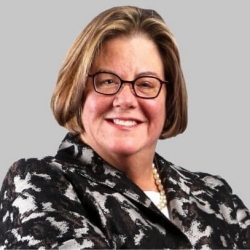 Villanova Law alum Stephanie Resnick '84, managing partner at Fox Rothschild LLP, was presented with the prestigious 2021 Judge Learned Hand Award by the American Jewish Committee (AJC) of Philadelphia/Southern New Jersey. The award is presented to an exemplary attorney for years of service, contributions to the legal profession and commitment to the community, whose advocacy has advanced democratic values, pluralism and mutual understanding which mirrors AJC’s mission.

Throughout her career, Resnick has worked to promote access to justice, to ensure the quality and independence of the judiciary and to advance women in the legal profession. She has been named to the “Influencers of Law” list by The Philadelphia Inquirer and is a recipient of the Lifetime Achievement Award from The Legal Intelligencer. Resnick was named to the “Trailblazers” list for Litigation by The National Law Journal and is a recipient of the “Women of Distinction Award” from the Philadelphia Business Journal.

For nearly four decades, the AJC has presented the Judge Learned Hand Award annually to recognize outstanding members of the Philadelphia legal community. This award is the highest honor the AJC bestows on members of the legal profession. It was established in memory of a legendary figure, Judge Learned Hand, Senior Judge of the United States Court of Appeals for the Second Circuit from 1924 to 1951.