As the Villanova community celebrated the graduating members of the Class of 2022, CPS awarded a group of students for their academic achievements and perseverance 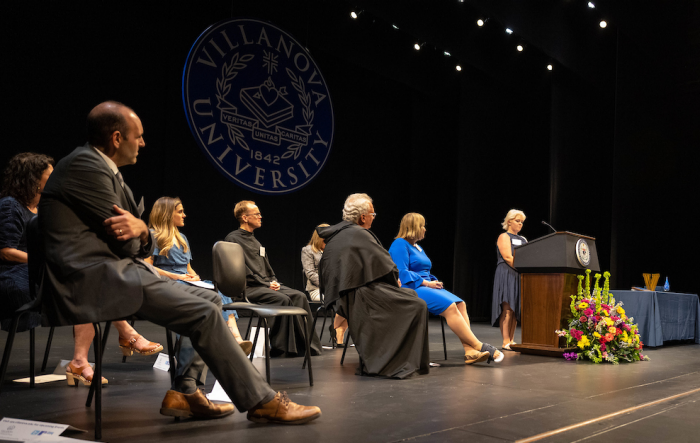 These students were recognized for their achievement across a variety of ceremonies, most notably the CPS Evening of Celebration, held within the John and Joan Mullen Performing Arts Center. The ceremony featured well wishes from members of CPS and University leadership, including Dean Christine Kelleher Palus, PhD and University President Rev. Peter M. Donohue, OSA.

Several other students were honored with additional awards and recognition, based on their academic standing or overall performance during their time with CPS. 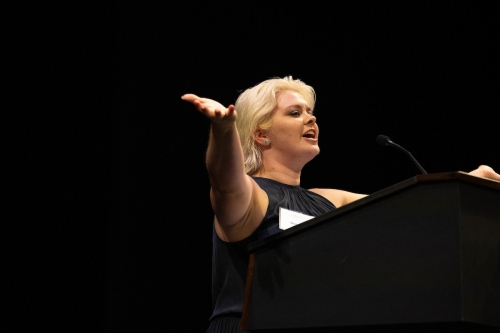 The Evening of Celebration included an address from student speaker Giovanna Mitchell, whose story about her journey to her degree despite many obstacles elicitied a standing ovation from her fellow CPS graduates.

Giovanna’s journey at Villanova began in the Fall of 2015 when she came to campus as an 18-year-old honors student and a student-athlete. After a leave of absence from Villanova, she returned to her studies in 2020, ultimately joining CPS in 2021 and completing her degree requirements as part of the class of 2022. Giovanna majored in General Studies, earning Honors and a Communications minor, all while maintaining a 3.62 GP.

Mitchell's next step will lead her to law school, to which she is currently preparing to apply. She is the mother of a 4-year old daughter, who proudly saw her mother graduate in cap and gown at the undergraduate commencement ceremonies. 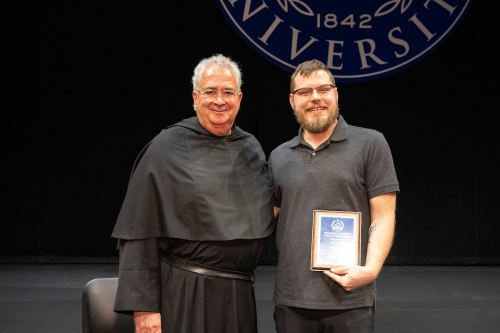 Each year, the CPS Grit Award celebrates a student who has demonstrated exceptional passion, courage, persistence, commitment, and strength of character during their academic studies at Villanova. This year the Grit Award was presented to Bryan Clark.

After serving in the United States Navy for eight years, Bryan embarked on his educational journey at Montgomery County Community College. At the time, he was struggling with transition difficulties, work, home life, and had trouble finding his way.

Unsure of his future, Bryan found support in the veteran community after meeting Mike Brown, Villanova’s current director of the Office of Veterans and Military Service Members, who was working at MCCC at the time. During his tenure in the Navy and MCCC, Bryan discovered his passion for technology and graduated with an Associate of Science degree in December of 2019. After encouragement from Mike, Bryan enrolled at Villanova in Spring 2020 to pursue a Bachelor of Interdisciplinary Studies degree in Information Systems and Technology.

Stationed in Japan while in the Navy, Bryan developed an affinity for the culture which inspired him to pursue the Japanese Language and Cultural Studies minor at Villanova. Bryan was engaged on campus and took advantage of the many resources available to students at Villanova. He took 15 credits each term to graduate in just four semesters all while maintaining a competitive GPA.

He met with Meredith Okenquist, the dedicated and experienced career services counselor for CPS students, who coached him through his job search. He also continued to be heavily involved in the veteran community with Mike. In the Spring 2021 semester, Bryan secured an internship with the United States Embassy in Tokyo to design an app for prospective Japanese exchange students. The app provides information to help these students understand what life is like in the U.S. to make autonomous and informed decisions on their educational experiences.

Upon graduating with his undergraduate degree in Fall 2021, Bryan was accepted to and started the Software Engineering Master’s program at Villanova. He also accepted a position as an open-source intelligence analyst/developer at Citi Bank just days before taking his last final exam. Bryan will use the knowledge gleaned from his undergraduate degree and current master’s program to build software that helps detect fraudulent websites. 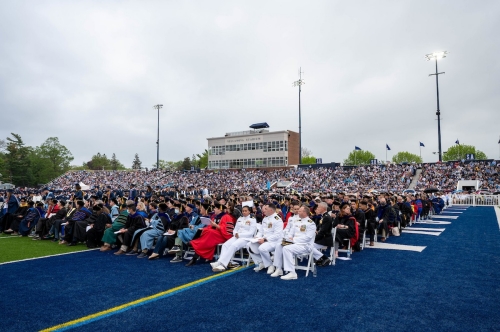 The Medallion of Academic Excellence is given each year by the College of Professional Studies in recognition of outstanding achievement in a specific major. It is the highest distinction the College can award to a graduating student and serves as a visible symbol of the significant contributions made by the recipient to the life of our college community.  Medallion recipients are selected based on criteria including cumulative grade point average, academic creativity, and perseverance.

Medallions were awarded to two students, who excelled in their respective majors:

Tracie began her studies at Villanova back in 1995, taking a long abscence to focus on work and her family in Cape May, NJ. She returned in 2021, energized to finish her degree, doing so in just one semester while making lasting friendships. Tracie will put her degree to work at Cape May Whale Watch & Research Center, which she owns and operates with her husband, Jim.

David came to Villanova in 2015, with just 15 transfer credits to get his educational journey started. A longtime employee of the Denver Health Department, serving as both an EMT and the Director of the STAR (Support Team Assisted Response) Team, David took all of his classes online from Colorado.

He will advance his education in his home state, having been accepted to the Universtiy of Colorado’s Master of Science in Organizational Leadership (MSOL) program. 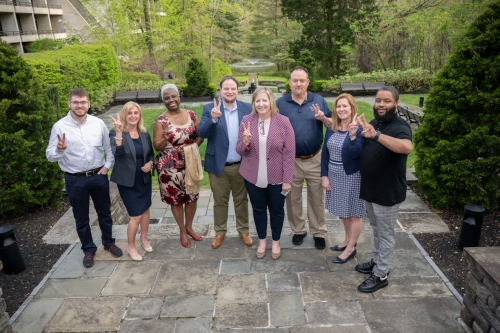 To be eligible for this prestigious academic organization, CPS students must: 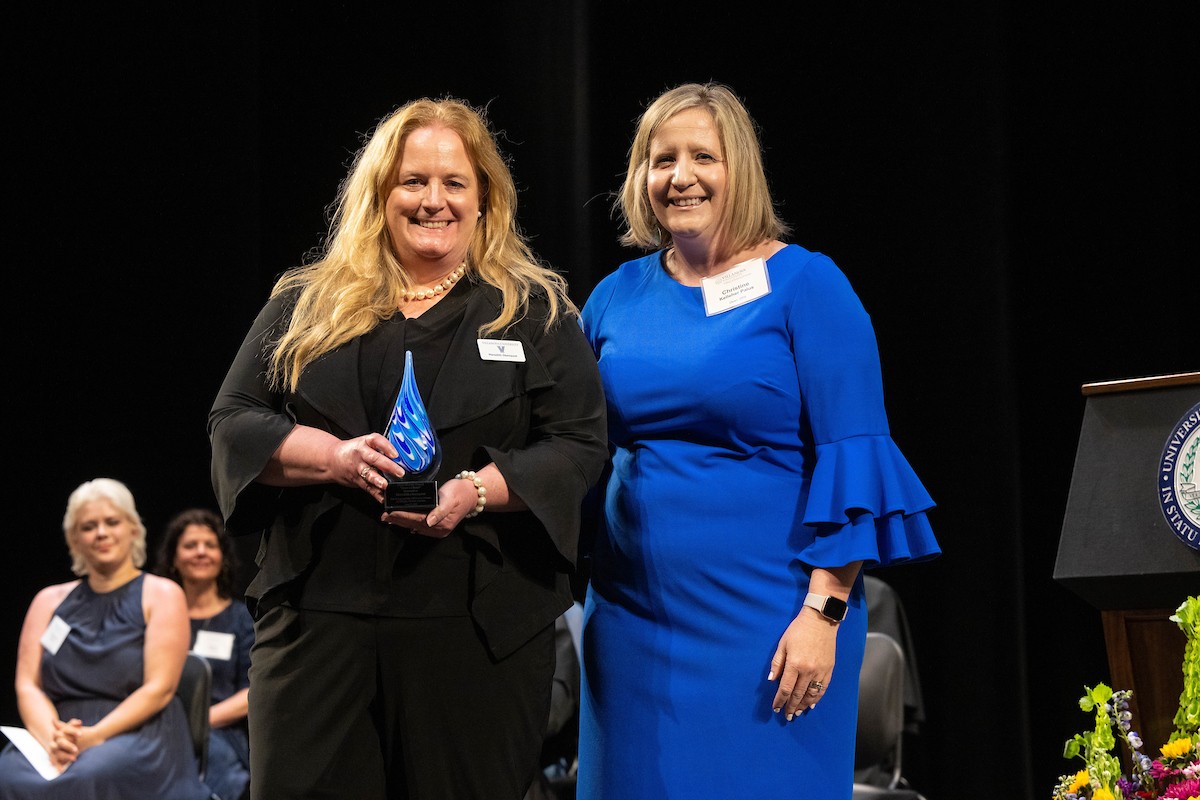 CPS annually honors a member of the Villanova community with the Steve Merritt Award. Named after Dean Steve Merritt, one of the most beloved and influential administrators at Villanova who passed away a few years ago, this award celebrates dedicated and humble service to Villanova, as well as a deep and lasting commitment to the Villanova values of Veritas, Unitas, and Caritas in support of students in the College of Professional Studies.

This year's recipient was Meredith Okenquist, who serves as a Career Management Coach on the Career Management Team at Villanova University. In this position, Meredith is responsible for the counseling and coaching of Villanova alumni and adult learners on career development and career transitions.

She provides programs and support to individuals who are pursuing career promotions or changes, transitioning industries, returning-to-work after being home with children, or who may be considering further skill building, research and education.

Meredith has more than 20 years of experience in human resources, recruiting, and job coaching, including positions at the Fox School of Business at Temple University; Careers on the Move, a boutique recruitment firm based in Manhattan; SAP America; and NovaCare, Inc. She has also served as an adjunct professor for undergraduate and graduate level professional development classes.

ENROLLMENTS ON CAMPUS AND ONLINE