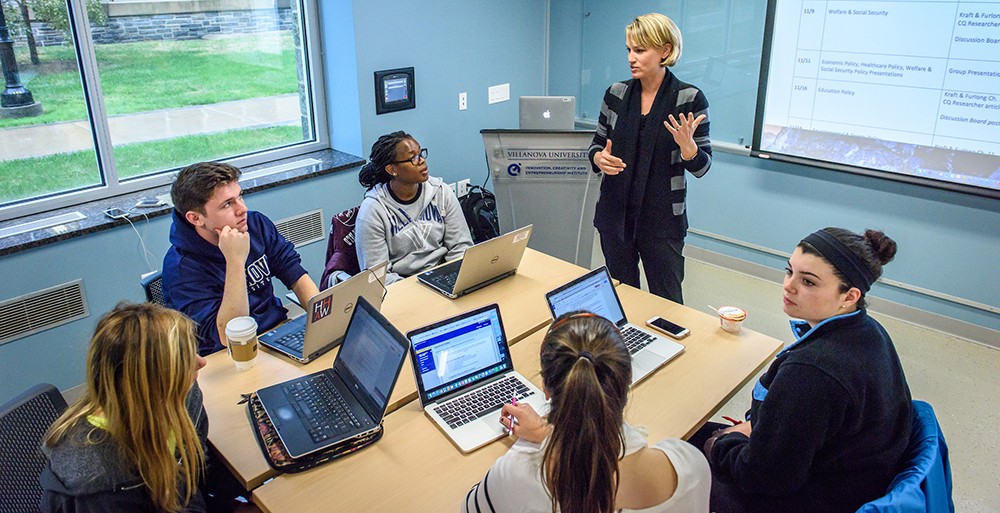 Villanova Public Administration faculty boast a wide range of scholarly interests and offer interdisciplinary and applied approaches. Our cohort of part-time faculty bring their unique set of skills, experiences and expertise to the classroom.

Faculty are actively engaged in research, publishing in the discipline’s top journals and university presses. They have established networks with nonprofit organizations and government agencies. Our faculty also have extensive experience in university administration, government management and the nonprofit sector. Students have the opportunity to pursue independent research under the advisement and mentoring of our faculty. Most important, our faculty are deeply committed to teaching and advising.

Learn from leaders in the field. Our cohort of part-time faculty enhance our program by bringing their unique set of skills, experiences, and expertise to the classroom. Their professional networks introduce our students to potential internship, fellowship and employment opportunities.

Dr. Arapis’ academic journey began in Thessaloniki, Greece, at the University of Macedonia. After graduating with a Bachelors in Economic Science he decided to continue his education in the US where he pursued an MPA from Kennesaw State University, and a PhD in Public Administration from Auburn University. Dr. Arapis, throughout his academic career, has taught Financial Management, Public Budgeting and Statistics at both undergraduate and graduate levels. His research interests lie in the field of public finance, specifically state and local financial management, financial reporting and accounting standards, fiscal transparency and accountability, and performance measurement. Currently, his research agenda is primarily focused on school district financing, local government fiscal savings, international fiscal transparency and the practice of budgeting for the state-level bureaucracy. Faculty bio.

Dr. Gadson’s research interest lies at the intersection of public program evaluation and the study of the structural and cultural forces that influence public policy initiatives. In her current research, she studies federal efforts to reduce health disparities in the United States through the Community Health Center program, and evaluate how social factors such as race, socioeconomic status, and neighborhood characteristics influence the program’s ability to meaningfully address health disparities amongst medically-vulnerable populations. Faculty bio.

A native of Chicago, Fr. Jacobs served for nearly two decades in Catholic middle and secondary schools as a teacher and administrator prior undertaking his work in Catholic higher education. Since coming to Villanova in 1991, Fr. Jacobs earned the rank of Associate Professor in 1996, tenure in 1998, and Professor in 2006, having become a nationally and internationally recognized authority concerning Catholic education. Fr. Jacobs also served two terms as a member of the United States Catholic Conference Committee on Education and has consulted Catholic schools and dioceses nationwide.

Having shifted his research interest to public administration in the mid 2000’s, Fr. Jacobs now researches and publishes in the areas of leadership ethics and organization theory. His soon-to-be-published article in the Encyclopedia of Public Administration and Public Policy traces the history of the contested concept of “ethical competence.” A regular columnist for the PA Times, Fr. Jacobs’ articles consider how public administrators can use the American Society for Public Administration’s Code of Ethics to build ethical cultures in their organizations. Currently, Fr. Jacobs is writing “Leadership Insight,” an excursus into the phenomenology of leadership and is editor for a special edition of the Journal of Management Systems which will feature prominent U.S. scholars discussing what MPA ethics professors have to suggest to their MBA colleagues about developing ethical competence in their students. Faculty bio.

Dr. Miltenberger’s research focuses on the relationship between nonprofit organizations and government agencies via human service contracting. Specifically, her research investigates how partnership arrangements and collaboration can be integrated into the current human services system. In addition, Dr. Miltenberger is interested in school district financial management and the assessment of school district financial condition. Faculty bio.

Dean of the College of Professional Studies, Professor of Public Administration

Dr. Palus’ research falls into two basic areas: 1) local politics and administration and 2) public management.  A common thread linking all of her work is a concern for the quality of representation and responsiveness in the American federal system. She is very interested in the processes associated with the formation, implementation, and administration of public policies, particularly at state and local levels.  Why are certain policies enacted?  How do institutional structures and environmental factors influence the relationships between citizens and government at the local, state, and national levels?  What role do elected and appointed officials play in the process of representation and policymaking? She strongly believes in the importance of both theoretically rich and methodologically sophisticated work.  The primary outlets for work in her areas of expertise are academic journals in the disciplines of Public Administration and Political Science. She has significant statistical training, and although most of her research projects use quantitative methodologies, she also has incorporated qualitative approaches. Faculty bio.

Dr. Perun’s research focuses on improving practice and policy in higher education through understanding how teaching shapes students’ learning experiences. His current research agenda includes (a) uncovering how students who are deemed under-prepared for college meet with success or failure in their courses, and (b) how Masters of Public Administration students develop ethical competency for leadership roles during their course of study. Faculty bio.

Dr. Wilson’s fields of study include nonprofit management, immigrant integration, and cultural competency.  She is interested in the role that nonprofit organizations play in delivering services to minority communities – ethnic, racial, and cultural minorities as well as immigrants –in the United States.  Dr. Wilson is the author of The Politics of Latino Faith: Religion, Identity, and Urban Community (2008), which examined the social and political involvement of three Latino faith-based organizations in the United States. Faculty bio.