From Villanova Law to the Pennsylvania State Capitol 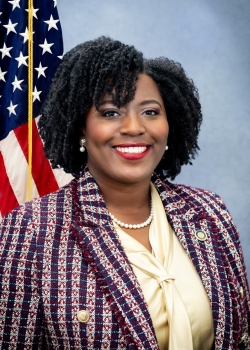 Today, Pennsylvania State Representative Joanna McClinton ’06 is the House Democratic Leader with a successful legal career and a dedication to public service. As a young girl in elementary school, Leader McClinton had big dreams. “When my older brother babysat me, he let me stay up late to watch Matlock,” said Leader McClinton. “I was infatuated with being in a courtroom, and I was fascinated with the idea of being a lawyer. Since first grade, to anyone who asked, I always said I was going to be a lawyer.”

A lifelong Philadelphian, Leader McClinton grew up in southwest Philadelphia and studied Political Science at La Salle University. She pursued her childhood dream of becoming a lawyer when she began law school at Villanova. “I graduated with honors from La Salle, so I came out of college feeling like I was leading the way,” said Leader McClinton. “I got to law school and I was humbled immediately. It was not like undergrad at all. Everyone was super smart and it was a true change. Even classroom etiquette and getting called on randomly by professors was different. It was a lot to digest and it was a very tough transition for me.”

Leader McClinton found support and solace from Villanova Law faculty members, her peers and alumni. Her 1L advisor, Professor Ann Poulin encouraged her to persevere in the face of adversity. “She made a tremendous impact on me,” said Leader McClinton. “She helped me stay focused and realize my full potential. She pushed me, and I needed that push.” Leader McClinton built her network by joining the Villanova Black Law Students Association (BLSA), and she was a member of the J. Willard O'Brien American Inn of Court, Villanova’s chapter of the oldest and largest legal mentoring organization in the country.

Each year, she was also matched with an alumni mentor through the Villanova Law Minority Alumni Society. During her 2L year, her mentor was the Honorable Kathryn Streeter Lewis. “Every year, I had tremendous mentors,” said Leader McClinton. “Judge Lewis was such a bid deal to me. She was so distinguished and really took an interest in me. She helped me stay focused and not get overwhelmed with the amount of work in law school. It was a connection that lasted and she eventually swore me into the bar.”

Through Inn of Court, Leader McClinton connected with Villanova law alumna Ellen Greenlee ’73, who at the time was the chief defender at the Defender Association of Philadelphia. “I was desperately trying to get an externship in her office. They had already selected their two externs, but I lobbied on my own behalf and convinced them to take a third. That started my whole career. I spent seven years at the Public Defender’s office, and I got a full-time offer from Ellen right before the end of my 3L year.”

In 2015, Leader McClinton was first elected to the Pennsylvania House of Representatives for the 191st District, serving communities in west and southwest Philadelphia, as well as Yeadon and Darby in Delaware County. In 2018, she was the first woman and first African American to be elected as House Democratic Caucus Chair, and in 2020, she was the first woman elected House Democratic Leader in the institution’s 244-year history.

“After spending nearly a decade as a public defender, I want my legislative work to help keep people out of the criminal justice system, especially youth,” said Leader McClinton. “I am working hard to get more equitable funding in our schools, which I first learned about in 2L when taking education law. I’m making every effort to chip away at these inequities so that kids get out of the pipeline to prison. Education is key, but changes also have to be made to the justice system to make it fair.”

Despite her demanding career, Leader McClinton makes time to give back to her alma mater. In April, she was awarded the Villanova Law Alumni Service Award, given annually to alumni who have distinguished themselves with outstanding professional personal achievements and have dedicated their time and service to Villanova Law and their communities. She serves on the advisory board for the Villanova Law Institute to Address Commercial Sexual Exploitation, frequently speaks on panels at the law school, has hosted Villanova Law interns in both her Harrisburg and West Philadelphia offices, been a mentor for the Minority Alumni Society and participated in Villanova on the Hill. Earlier this year, she was featured in the inaugural Villanova Law Women’s Network event, “A Conversation on Empowerment with Villanova Women Trailblazers.”

“It is not lost on me that I was not the first, and I will never be the last, to have that transition to law school be so tough,” said Leader McClinton. “I make it a priority to help and open my network to Villanova Law students the way Judge Street helped me.”

Leader McClinton added, “I credit the work that I’m doing today, and certainly the start of a pretty amazing career, to my law school. Villanova exposed me to so much. The cadre of students that I met and their backgrounds helped me expand my personal view and goals that I still have to this day. Coming from a small one-way street in Southwest Philadelphia and driving to the Main Line every day was the best thing I could have done.”